Putin and Russia Today continue incitement to kill through lies about non-existent Odesa ‘massacre’Ukraine faces human rights court hammering over investigation of Odesa 2 May TragedyOdesa Smoking Gun Leads Directly to Moscow"US guilty of genocide": Kremlin supports anti-Maidan festival with links to the German far rightOdesa 2 May Suspect: We were financed by MoscowVital Probe of Odesa May 2 Tragedy stymied because of questions answered?Movement at last on Odesa 2 May investigationRussia Today, or why Odesa May 2 is different from BaltimoreOdesa May 2 Investigation: A Failed Test for Ukrainian JusticeMore Evidence against Incendiary Lies about Odesa 2 MayContinuing Obstruction of Odessa May 2 InvestigationPropaganda that KillsOdessa May 2 trial turns into farce as Russia continues ‘massacre’ propagandaBad Start to Crucial Odessa May 2 TrialsRussia’s New Odessa FileOdesa "Massacre" Propaganda vs. the FactsDangerous silence over police role in Odessa May 2 eventsWithout Double StandardsWhat Russian TV won’t show about the events in OdessaCVU: Pro-Russian activists sold information about pro-Ukrainian activists in Odessa
• Topics / The right to a fair trial

Dramatic Acquittals in Trial over Odesa 2 May 2014 Riots 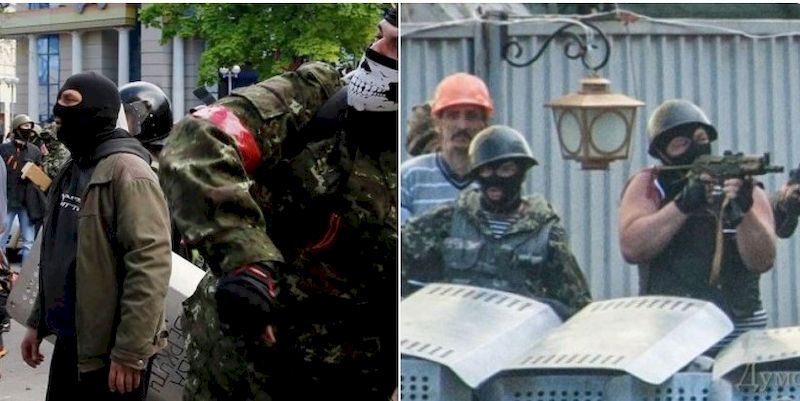 There were violent scenes in Odesa on Monday evening following the sensational acquittal of 20 pro-Russian activists who had been charged over the fatal disturbances in Odesa on May 2, 2014.  The outrage from some quarters, and the prosecutor’s stated intention to appeal the ruling cannot hide the brutal truth that a guilty verdict, given the charges laid, would have probably been a travesty of justice. It is, in fact, cheering that a panel of judges in Ukraine should have reached a verdict based solely on the lack of any merits to the case, ignoring all pressure from outside.

As of late on September 18, two of the men – Ukrainian Serhiy Dolzhenkov and Russian Yevgeny Mefedov had been re-arrested, seeming on charges under Article 110 of the criminal code – encroaching on Ukraine’s territorial integrity.  The other three men who had remained in custody have reportedly been released.

All 21 men were in detention for considerable periods of time, and if the acquittal is upheld at appeal stage, some may well seek compensation.

The criminal proceedings and trial of 21 pro-Russian activists (one fled recently to Russia) had been criticised from the outset by the 2 May Group, a civic initiative which has closely investigated the events and by the European Commission’s International Advisory Panel.

It was repeatedly pointed out that the 21 defendants were facing vague charges of involvement in riots which could just as well have been laid against a huge number of other people that day.  The prosecutor had, nonetheless, demanded sentences of between 8 and 15 years.  The longest sentence was asked for Dolzhenkov who was considered to have organized the riots.  12 years were sought for the other four men who had remained in custody until Monday’s verdict: Yevgeny Mefedov; Maxim Sakaulov; Vladislav Romanyuk and Serhiy Korchinsky.

Instead all of them were acquitted, with the reasons given an indictment of a shockingly inept prosecution.

All impartial investigations confirm that the disturbances that day arose after a group of pro-Russian anti-Maidan activists from the recently formed (and seemingly Russian-funded) Odesskaya Druzhyna attacked a peaceful march for Ukrainian unity.  The violence escalated, with weapons and firearms used by both sides, and spun out of control particularly after news of the first death – that of Ihor Ivanov, a Maidan activist.  Six people were killed, four of them anti-Maidan activists.

Pro-unity activists then moved to Kulikovo Pole Square intending to destroy an anti-Maidan tent camp, where they were shot at by activists from inside and on the roof of the Trade Union building. Molotov cocktails were used by both sides, and independent experts have concluded that there is no way of determining whether the fire was started by a Molotov cocktail badly thrown by anti-Maidan activists from inside the building, or by pro-unity activists outside the building.  42 people lost their lives.

Only one person - Serhiy Khodiyak, a Euromaidan activist, - has been charged with shooting at people that day and causing the death of at least one person (Yevhen Losynsky), While a direct charge of murder may be impeded by the fact that no weapon was found, Khodiyak was certainly seen shooting.  This already led to questions being raised that he was not remanded in custody like the 21 pro-Russian activists facing less serious charges.  He was initially placed under house arrest, but since this can only be extended twice, he was eventually released from any significant restrictions on his movements.  If his trial is still continuing, it is doing so very slowly, in part because of the permanent obstruction from pro-Ukrainian activists who assert that he was defending his country that day and should not be on trial.

The trial of the 21 men in Odesa’s Malinovsky Court had long turned into farce.  Only 20 out of 100 court hearings over the first two years had actually studied the evidence with the others disrupted by activists or adjourned due to the non-appearance of participants.  The court examination was finally suspended in December 2016 and the case passed to a court in Chornomorsk which began the new hearings in June this year.

It was presiding judge Philip Zhuravel from this court who on September 18 read out a long and damning verdict.  The panel of judges found that the charges had not been proven in any of the cases. Odesa-based Dumskaya quotes the verdict as stating that there was not one piece of convincing evidence to back the charges, and the prosecution had not even tried to prove the men’s guilt.

The court rejected the testimony of the main prosecution witness Oleksandr Posmychenko due to irreconcilable contradictions, as well as photographic and video material which were copies not originals.  The court did, instead, include photographs from a defence witness and the latter’s testimony that the pro-Russian activists had not been armed, unlike the pro-Ukrainian activists.

The court also rejected Posmychenko’s ‘identification’ of some of the defendants.  He had, first, recognized them from photos, not live, which is in breach of procedure, and had, secondly, been asked to recognize them out of a ‘line up’ which including footballer David Beckham and Hollywood actors.  The court believed this had been done deliberately to ensure that Posmychenko ‘recognized’ Dolzhenkov.

The court also stressed that the indictment seemed politically partisan.  Only pro-Russian activists were facing charges, although the majority of those killed and injured had also been pro-Russian.

There is considerable evidence that Russia was directly promoting trouble in Odesa, and that the plan was for events similar to those in Donbas.

The 2 May Group has also found proof that pro-Russian activists used deceit to entice people into the Trade Union building.  It is noticeable from all video streaming during the fire that the people outside had no idea how many people were in the building.

There is quite simply no proof at all that anybody planned the fire, and the deaths that day are widely believed to have acted as a jolt that prevented Odesa being pulled in the same direction as the Donetsk and Luhansk oblasts.

This did not suit Moscow at all, and there has been a systematic and well-funded campaign to push the idea that there was a ‘massacre’ that day with ‘Ukrainian radicals’ deliberately setting the building on fire.  This is perpetuated by Russian state-controlled media, including Russia Today or RT, and often repeated by Moscow’s friends from the far-right, and sometimes from the far-left in Europe.

The prosecutor has condemned Monday’s ruling and claimed that it “flagrantly violates the norms of the law”.  It remains to be seen how the court of appeal will view the case, but much of the criticism expressed by the court on September 18 echoed concerns expressed by the 2 May Group and other Ukrainian and international observers.  It is quite likely that the European Court of Human Rights will find Ukraine in violation of Article 2 of the European Convention over the failure of the Interior Ministry and Prosecutor’s Office to carry out a full investigation into the tragic events on May 2, 2014, and to hold those liable to account. (details here)