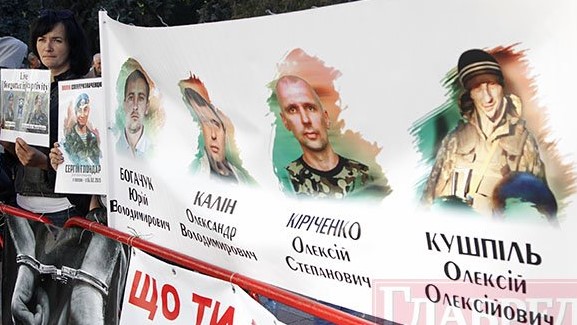 “If it was their sons who were imprisoned in Donetsk, we wouldn’t see negotiations dragging on for almost three years.”  This was the blunt assessment from Ludmila Holous, mother of Oleksandr Lazarenko, one of many young soldiers taken prisoner by Russian or Russian-backed militants in Donbas.

She is one of the mothers and wives who are holding a vigil until the next Minsk negotiations outside Ukraine’s Verkhovna Rada in the hope of finally being heard by Ukraine’s MPs. They want a report on the work of the humanitarian subgroup in Minsk over the last year, and would like to see a special commission formed to monitor its work.

The main demand, however, is for legislative recognition of the men’s status as prisoners of war.  At a meeting with the Speaker of the Verkhovna Rada Andriy Parubiy and other MPs on April 12, 2017, the relatives of the men were assured that the question would be considered in parliament.  There has thus far been no noticeable progress.

Calls for this clarification of status have long been endorsed by human rights groups. Alina Pavlyuk, a lawyer for the Ukrainian Helsinki Human Rights Union [UHHRU] explains that her organization has also put forward proposals but received no reaction.

She stresses that the issue of status is critical since the Kremlin-backed militants of the self-proclaimed ‘Donetsk and Luhansk people’s republics’ could begin putting these POWs ‘on trial’ at any moment.  This is in direct breach of international humanitarian law, particularly the Third Geneva Convention on the Treatment of Prisoners of War.

“It is articulated there that a state which is holding soldiers prisoner, and we consider this to be the Russian Federation, does not have the right to put them on trial for actions committed during military conflict.  We view the representatives of the occupied territory of Donbas as agents of the RF, a state which is directly engaged in aggression against Ukraine.”

There are reportedly already plans for such so-called ‘trials.  Serhiy Glondar, one of the military men taken prisoner during the Russian and Russian-backed siege of Debaltseve in early 2015, wrote that he had been visited by an OSCE representative at the end of August who asked if all of them know what their “terms of imprisonment” are.

Pavlyuk stresses that such actions are purely a method for dragging out the exchange process, with the side holding them looking for new levers of influence on Ukraine.

Ukraine’s leaders, however, are doing nothing to counter this and there remains no single position on ensuring the release of all prisoners of war.

There has not been one single exchange in the last year.

Many of the men have been in captivity since 2014 or 2015.  Oleksiy Kirichenko volunteered early in the military conflict and was taken prisoner at the end of August 2014.  Ihor Melnyk had, on September 20, been in captivity for 673 days, Vasyl Hulko – for 676 days and Oleksandr Oliynyk – almost three years (955 days).

Serhiy Glondar and Oleksandr Korinkov were captured during the siege of Debaltseve in February 2015.  Glondar’s wife Yekaterina learned that she was expecting the couple’s second child the day that her husband was taken prisoner.

The two spetsnaz officers from Kirovohrad were accompanying seven other Ukrainian soldiers who on Feb 16, 2015 were retreating from Debaltseve, a strategic railway hub which was finally taken by Russian and Russian-armed troops on Feb 18, 6 days after a supposed ceasefire agreed by Russian President Vladimir Putin in Minsk.

Nine men altogether were fired upon.  Two were killed, two seriously injured.  The latter were soon released by the militants.  Another two were handed over after 50 days, and one managed to escape.  Korinkov and Glondar were clearly viewed as ‘trophies’ and remain to this day in captivity.

There are over 130 officially known POW and civilian hostages in militant captivity though the number may well be higher.