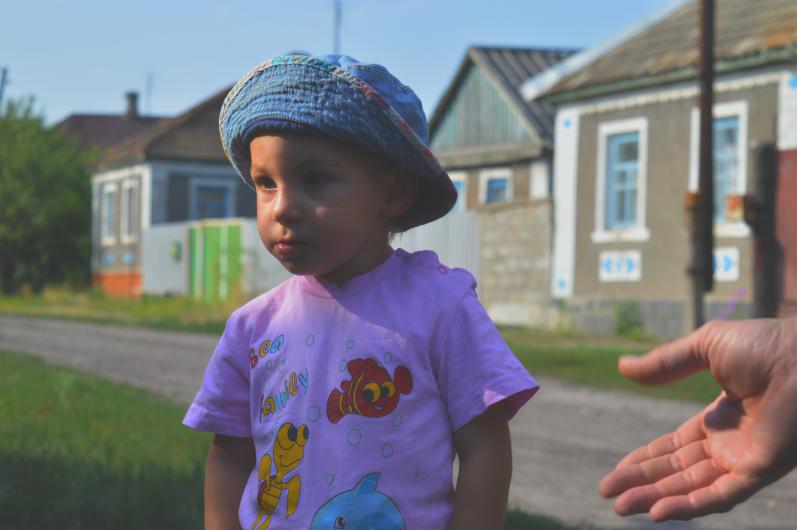 The settlement has come into the view of human rights activists long ago. However for all the time of the conflict representatives of the Kharkiv human rights group could get there only two times with a monitoring visit and also for the purpose of rendering legal aid to local population, though there were many attempts to pass in Lopaskino.

Every time when our group was deployed in the opposite direction by military on the nearest to the settlement post, there was an impression that departmental structures hide this piece of the Ukrainian earth from the public eyes on some purpose.

Fighting near the village of Lopaskino

On June 16, 2015 the group of fighters of the Golden Gate battalion was ambushed and has engaged with the opponent’s DRG near Lopaskino. The Ukrainian military have beaten off the attack. On June 19, 2015 the attempt of breakthrough of the opponent on the Ukrainian territory has again taken place at Lopaskino.

On September 2, 2015 the compound mobile group on fight against smuggling was ambushed between Lopaskino and Lobachevo therefore the volunteer Andrey Galushchenko, with signal “Andrew”, and the employee of the Public fiscal service of Ukraine Dmitry Zharuk have died. Four more people who were in the car were wounded. On September 3, 2015, near Lopaskino the commander of a mortar company of the 80th crew Vladimir Kiyan with a call sign the Typhoon was blown up on a land mine. On October 29, 2016 at the village of Lopaskino the mobile group of the State Courier Service of Ukraine has come under fire.

It should be noted what from the moment of capture of the village under control of AFU, nothing in the settlement says that Lopaskino is the territory under control to Ukraine except a yellow-blue flag over it.

In order that human rights activists or journalists could get to the village, it is necessary to undergo a number of coordination in the headquarters of ATO, and after also with commanders of the military units located about the settlement. Most often these very commanders become an obstacle for entry into the village.

The village of Lopaskino as well as next Lobachevo, are located on the "Ukrainian" coast of the Seversky Donets, but the distance from larger settlements is considerable.

Geographically and historically inhabitants of Lopaskino and Lobachevo have been connected with nowadays occupied river bank and larger village Zheltoye, the towns of Slavyanoserbsk, Zimogorye, Aleksandrovsk. On the opposite river bank in the village Zholtoye there is the nearest school and kindergarten, out-patient clinic, shops, local governments.

But if shops work and there is a gas in Lobachevo, then Lopaskino is deprived of the elementary benefits of a civilization in general.

On a census of 2001 the population was 138 people. From the beginning of armed conflict this number was reduced more than twice. Today 54 persons live in Lopaskino. Mainly they are people of advanced age. Four of them are children up to 7 years.

Today in the village there is no electricity (the generator is turned on for two hours a day, to recharge phones), there is no fresh water and there are no stationary shops. The drugstore, school, kindergarten, transport connection with larger settlements and authorities eventually are not present either.

Everything that provided full-fledged life in a civilization to them remained on "that" side.

From an interview with locals: "We don’t starve. The Red Cross brings humanitarian aid periodically. It is enough. Two times a week the businessman comes from whom it is possible to buy food. However it is impossible to take much. It’s summer. As a result of fighting we haven’t had electricity for several months. Respectively the refrigerators don’t work, and there is no place to store products. I buy 200 grams of sausage at most for one time. There is no sense to take more. It will be gone by the evening in such heat. It’s even more difficult for those who have small children".

Besides, there is no transport connection with other settlements which are under control to the Ukrainian government. Only those who have own transport have an opportunity to get to the “mainland”. The same lucky people help to survive to fellows villagers by buying medicines and other goods in larger settlements of area"on demand".

As it was already told, there is not any. However rather long time even after the line of demarcation was finalized down the river the Seversky Donets, locals of Lopaskino, Lobachevo and occupied Zheltoye and Slavyanoserbsk communicated somehow among themselves by boat crossings. That is those who had a boat in their household had an opportunity to visit the family who remained on "that" side. From the beginning of blockade initiated by some deputies of the Verkhovna Rada, all communication with the occupied territory and also children and parents has broken.

From an interview with locals: "I saw my granddaughter only a few times in her life (cries). Till this winter it was still possible for the daughter to reach here or for me to get to them by boat or by swimming somehow. Difficult, but though possible … And now there is no way at all. As soon as you approach the river bank – they shoot at once. It is unclear who and from where. But it is terrible. So we approach the river from the opposite banks with the children. They on the one side and I’m on the other side. My daughter or the son-in- law lifts the granddaughter as high as they can with their hands, and I stand, I watch the child and I cry …"

Representatives of the State Courier Service of Ukraine rather loudly said a long time that Lobachevo, Lopaskino and Trekhizbenka passed through themselves "lion’s streams" of smuggling towards occupied territories.

We didn’t manage to confirm information on those "streams" mentioned. All data on detention of "smugglers" came down to 20 bags of potato and several kilograms of other food transported on "that" side. Besides, those who at least once got to Lopaskino or Lobachevo could see that "smuggling streams" could be taken only by helicopter or submarines on those roads (or rather on those directions).

Questions of smuggling are very puzzling for locals. For the last three years villagers could only observe each other, occasionally cars with a humanitarian aid and military in most cases.

From an interview with locals: «Lately military have begun to behave rigidly and unscrupulously with those who have boats very. All of them were destroyed. Some boats were shot directly on the river; some were destroyed in the yards. I transported bags with vegetables to children in Zheltoye. I have a kitchen garden. And there is no place to put a harvest. And everything is extremely expensive on that side. The military shot my boat directly on water. Naturally, it drowned. Whom have they made better to? To me? To my children?"

From other interview: "In the village there were three last boats at one time. L * who was 75 years, for example, had the boat remained from her husband. He died. That boat stood still. Military destroyed it in the yard directly after they had seen it. Was it impossible to act like humans? Why not tell to hide. She would hide it at once. We became obedient here. We silently do what we are told as we are afraid".

Proceeding from that information which we managed to receive from locals in Lopaskino and also from those answers to queries in authorities which have been directed by us earlier, the Kharkiv human rights group once again insists that the government of Ukraine and the management of ATTs is obliged to enter amendments into the developed throughput system on the line of demarcation in the nearest future.

Taking into consideration that there was no electricity in the village we didn’t manage to survey the situation with television. However it is possible to assume that nothing broadcast here except the Russian TV channels. We have had an opportunity to observe this tendency for three years already while working at the line of demarcation. If you live further than regional Severodonetsk and have no satellite TV, then you have to watch Novorossiya TV, "Zvezda", "Oplot". At the enemy broadcasting in masses is all right unlike Ukraine. And that is the situation in front settlements! Where if not here the Ukrainian TV and radio are sharply necessary!

As for radio – there is only "Republic" and "Pobeda" which broadcast "about the luck and victories of valorous army of militia over "Ukrainian punishers".

Newspapers to the village aren’t delivered. Any. At all.

You are supposed to draw conclusions...

The next settlement in which it is possible to receive more or less full medical care and school or preschool education is Novoajdar situated in 45 km distance. "Ambulance" if goes, then from Novoajdar too.

There are four children in the village. They regularly need inoculations and full medical examinations at least! To get them it’s necessary to traverse 45 km of fully destroyed road and a set of posts!

Every evening, mainly with nightfall, sounds of the working weapon are heard in Lopaskino as well as in the next Lobachevo. Destructive arrivals on these settlements it wasn’t fixed long ago - about a year as locals say.

We also became involuntary witnesses of evening firefight when our group worked in settlements. We don’t undertake to judge who shot the first. But evening firefights is the habitual phenomenon in here.

Summing up the result of a monitoring visit to Lopaskino and Lobachevo there is a wish to tell the following: there is nothing bad if for three year in the conditions of war people have been trying to survive and trying to help to survive to the family on "that" side, transporting food by boats at least! And that is reality not only for Lopaskino and Lobachevo but for at least twenty similar settlements on the line of demarcation. It would be worth, probably, even delivering food and all necessary medicines on behalf of Ukraine to freely civilian population even on occupied territories provided that it won’t fall into hands of fighters.

We, Ukraine, have to support those people who became hostages in "a gray zone" and in occupied territories in every possible way; otherwise we will definitely lose them. Even those who survive in notionally Ukrainian territory now!

Society has been between the devil and the deep sea for three years. It is possible to win against external threat only with the help of consolidation of society and accurate distribution of responsibility. The army has to carry out the fighting task, but not be engaged in "education" of local population! It is possible to reorient outlook of citizens where it’s necessary only by accepting their everyday problems. Now all local can see the difference between daily routine on different river banks - they don’t need to be agitated against delights of life in "republics" any more.

The state institutions constantly forget about needs of the citizens living in geographically extremely inconvenient place.

Categorical rejection is caused by a position of representatives of separate military structures. Members of our group had compelled communications with some of them because practically every second military shows ill-will to the local population living in under control territories. Their attitude towards the civilian population forced to live in temporarily occupied territories is even more rigid.

It is much easier to accuse groundlessly each inhabitant of "hot regions" of separatism and terrorism, than at least for a minute to think of what they can be guilty.