Historian Anne Applebaum Details Stalin’s War Against Ukraine: ’I Believe It Was Genocide’ 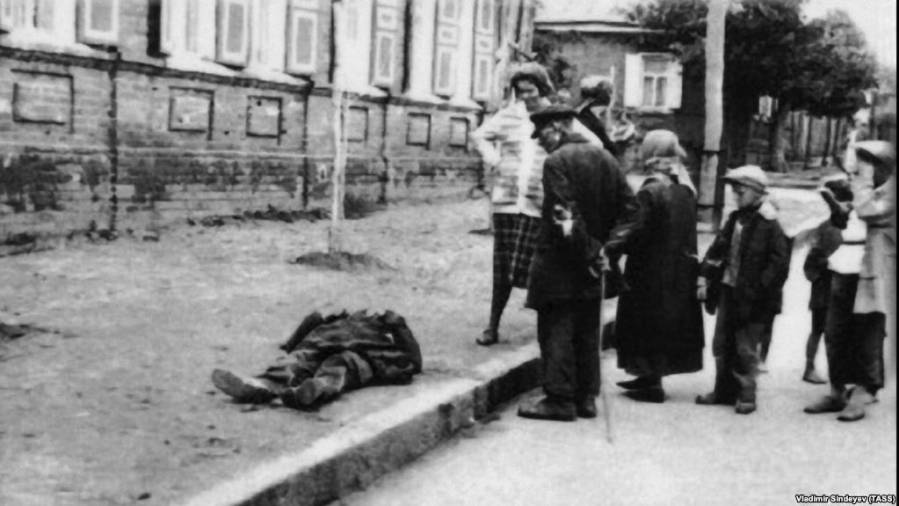 The true number of famine victims has been difficult to calculate, Anne Applebaum says, because the Soviet system tried to cover up the famine immediately after it happened.

The latest book by Pulitzer Prize-winning American historian Anne Applebaum, Red Famine: Stalin’s War On Ukraine, sheds new light on one of the seminal events in Ukrainian history – the deadly famine of 1932-33 that Ukrainians call the Holodomor. Some 4 million Ukrainians were killed in a famine that was engineered by Soviet dictator Josef Stalin to eliminate a perceived threat to central Soviet power.

RFE/RL Russian Service correspondent Natalya Golitsina spoke with Applebaum about this tragedy and the role it continues to play in Ukraine’s relations with Russia.

RFE/RL: What caused the Holodomor?

Anne Applebaum: The Holodomor was created deliberately by Stalin. There was, in 1932, the beginnings of broad Soviet famine that was caused by collectivization and the grain-requisitions policy. By the autumn of 1932, Stalin decided to make use of this crisis, to use it in order to target Ukraine specifically. And at that time, as my book shows, there were a number of measures taken that specifically affected Ukraine: blacklisting of particular farms and towns and villages, a cordon around the border so that people were unable to leave Ukraine, special measures against Ukrainian cultural institutions and the Ukrainian language. And these were all undertaken at the same time.

I do believe that was intended to kill more people in Ukraine and that it did so and that the Ukrainian Communist Party and the Soviet Communist Party knew that this was happening. Yes, it was an intentional famine.

​RFE/RL: And Stalin was responsible?

Applebaum: Stalin is personally responsible, but a lot of other people were also responsible, too. The famine was carried out with the help of Ukrainian bureaucrats, the Ukrainian Communist Party, as well as by Russians and Soviet leaders who came into the country from outside.

In order to carry out a famine like this – remember, it involved removing the food (not only grain, but also other kinds of food) from people’s homes -- in order to carry it out, they needed many people. So I would say there was a wider social responsibility.

RFE/RL: Why would Stalin target Ukraine in this way?

Applebaum: Stalin was afraid of counterrevolution and he was particularly afraid of Ukraine. He remembered that during the Civil War era, there had been a major peasant rebellion in Ukraine. And in 1932, he knew there had been an armed uprising in opposition to collectivization in Ukraine. And he also knew that there were many people in Moscow who were upset more generally about collectivization and about its impact.

Actually, in the autumn of 1932 when they passed the decrees that were designed specifically toward Ukraine, one of the decrees they passed was an end to [the 1920s-era policy of] ’Ukrainization’ – that is, language and culture, the propagation of Ukrainian identity. This was seen as somehow counterrevolutionary and dangerous and they sought to end it. He was afraid that this would harm him. So, the famine, along with a crackdown on Ukrainian intellectuals – these two things together were an attempt to make sure there would be no counterrevolution coming from Ukraine.

I think that for Stalin, Ukraine represented an idea. The idea of an independent Ukraine was a challenge to central Soviet power that could potentially undermine the Soviet state. This is what he believed. I think he also believed a sovereign Ukraine would find allies, would ally themselves with Poland or other countries and they might not be loyal to the Soviet system. For him, it was very important to eliminate this Ukrainian idea. He believed it was a challenge to the Soviet idea.

And I should say that if you step back and look at it, he may have been right because, of course, the revival of the Ukrainian idea that happened in the late 1980s and early 1990s, ultimately leading to an independent Ukraine in 1991, did help undermine the Soviet Union. It was a challenge and a real threat to Soviet power – and [Stalin] sought to eliminate it in any way.

​RFE/RL: How many people died as a result of the Holodomor?

Applebaum: Over the last several years, a team of really good Ukrainian demographers has gone back through the archival material and has looked at local birth and death records. And the number they have come up with is that 3.9 million -- nearly 4 million people -- died in Ukraine. So-called excess deaths. In other words, more than the number of people who would normally have died. So we can say that that is the number of people who died.

The numbers have been difficult to calculate because the Soviet system tried to cover up the famine immediately after it happened, even going to the extent of covering up and hiding a census that was taken in 1937, which showed large numbers of deaths. But this team of Ukrainian demographers recently has come up with, I think, finally, very good numbers.

RFE/RL: There has been much debate over whether the Holodomor should be considered an act of genocide. Where do you stand on that?

Applebaum: I’m very happy to call it a genocide, according to the original definition of the word genocide as it was invented by Raphael Lemkin, who was the lawyer who came up with the term. I think it fits perfectly into his definition of genocide.

I know it is more difficult to do so in international law because of the way that international law was written and in particular because the UN Convention on Genocide was created with the help of the Soviet Union, which was very anxious not to include Ukrainian famine and other Soviet crimes. I know that legally it can be more difficult to do it, but, yes, of course, I believe in essence it was a genocide.

RFE/RL: Why didn’t the Soviet Union seek international assistance during the famine as it did during other famines in the 1920s?

But, of course, the second reason was that he was using this general famine to target Ukraine. He wasn’t interested in saving people. He wanted the peasants, as a group, to be weakened and he didn’t want people to survive. So there was no effort to collect international aid.

RFE/RL: How were the grain requisitions carried out?

Applebaum: It is important to note that the famine was not just the result of grain requisition, although that was the most important part of it. Brigades of activists came through Ukrainian villages and they took not only grain but everything else. They took all other kinds of food – vegetables, beets, potatoes. There were meat quotas they had to fulfill. They took everything they could out of people’s homes. It was a crude and violent operation.

In the course of doing so, they would beat people up and throw them out of their homes. They would attack them and torture them in order to get them to… They believed the peasants were hiding grain and food. And, of course, sometimes they were. So they would torment people in order to get them to give up the grain and the food. It was a very violent and chaotic operation. But the long-term effect of it was that people were left with literally nothing. They would have no food in their houses at all.

RFE/RL: How widespread was cannibalism in Ukraine at this time?

Applebaum: Cannibalism wasn’t common, but it did happen and there were many incidents of it that were reported to police. They knew about it, the authorities knew about it, and they would have passed it on to higher levels. It is important to note that even then, even when there was no food at all, cannibalism was never considered normal. It always evoked reactions of horror. Cannibals were often arrested.

There is some evidence that cannibals were later on even kept together in the [gulag] camp system. There were reports of people who saw them on the Solovetsky Islands a little bit later on. It was, if not common, it was there and in almost every one of the famine districts there were incidents of cannibalism. And there are descriptions in the archives and in people’s memoirs.

RFE/RL: Did Ukrainians fight back, resist during the Holodomor?

Applebaum: There was initially resistance to collectivization. And then there was resistance to requisitions. People hid their grain. Later on, when the famine began, there was very little resistance because people were simply too hungry and not able to resist anymore. But there were also some Ukrainian peasants who collaborated and helped carry out the requisitions.

This is an important point to remember because it is an indication of just how effective propaganda and terror were in convincing people to do terrible things. People were afraid of being deprived of food. They were afraid of the violence. They wanted to save their own families and their own children, so some local people did help the activist brigades carry out the requisitions and carry out the food searches. In effect, the Ukrainian peasantry was divided between those who suffered and those who sought to find ways of surviving themselves.

RFE/RL: Why is the Holodomor such an important chapter in Ukraine’s history and such an integral part of Ukrainian national identity?

Applebaum: The Holodomor, because it was repressed and because you were not allowed to speak about it, became part of a kind of underground culture in Ukraine. People spoke about it behind the scenes and passed the story of it from parents to children. The Ukrainian diaspora began to speak about it and write about it and even commemorate it, particularly after they were able to leave the country in large numbers in the 1940s and 1950s. It became a kind of symbol of Ukraine’s untold history. It is a way in which Ukraine’s history is different from that of Russia, and it is being denied.

In the late 1980s [came the Chernobyl disaster] and immediately afterward many Ukrainians began saying, “Look, this is something that has happened to us before. We had this famine disaster and that was also kept secret.” People began speaking again about the famine right at the time when Ukrainian independence became something that was possible again. Although I think there are other reasons why Ukraine sought independence, it was an important motivation for people, a memory of something terrible that had happened and that had been silenced. One of the motivations for people to begin speaking again about Ukraine and Ukrainian sovereignty was to talk once again about the famine.

RFE/RL: You discussed earlier how Ukraine presented a challenge to Stalin. Is there something similar going on now with Russian President Vladimir Putin?

Applebaum: I think that for Putin, Ukraine represents a challenge a little bit the way Ukrainian sovereignty was a challenge for Stalin. Ukrainian independence represents a challenge for Putin as well, particularly a Ukraine which is pro-European, which is democratic, which believes in freedom of speech and the rule of law. These are all ideals…the kinds of values and ideas that threaten Putinism because Putinism is an oligarchic autocracy that would be in trouble if there was complete freedom of speech, freedom of the press, and the rule of law.

A Ukraine which embodies European values is a genuine ideological challenge to Putin. I wouldn’t say to Russia itself because I think Russia and Ukraine should be close neighbors. If they both shared the same values, they would have valuable exchanges and trade and so on. But Putin’s political system does feel challenged by these values and that explains both his attitude toward Ukraine and his invasion of Ukraine.