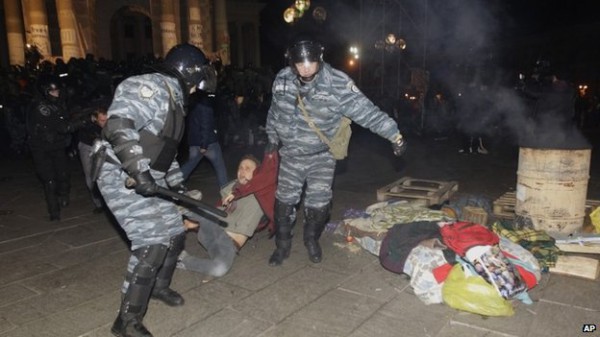 If Ukrainian President Petro Poroshenko signs a law just passed by the Verkhovna Rada, the Special Investigations Department will be forced to terminate all investigations into unsolved crimes committed during Euromaidan, however serious.  The adopted amendment to the Criminal Procedure Code [CPC] would have similar consequences for corruption and other criminal investigations, including that hanging over Andriy Lozovy, the MP who proposed the amendment.

The Lozovy amendment to the CPC, adopted on October 3 with a small majority (234 votes) restricts the period of pre-trial investigation into grave and especially grave crimes to six months prior to a person being informed of the suspicion and to two months after this.

The new provisions of the CPC stipulate that the investigators will have a year to establish those suspected of committing a crime - first six months, then another six months can be added by the courts.  No other possibilities for extending the time frame are envisaged.

Horbatyuk also notes that there are no transitional provisions to regulate the situation with respect to existing investigations. His department is currently dealing with investigations which were initiated almost four years ago, such as that over the violent dispersal of Maidan activists in the early morning of November 30, 2013.

Horbatyuk stresses that there is a conflict of interests in Lozovy’s case as he stands to gain from adoption of the law.  This would terminate his criminal proceedings for tax evasion, and he was legally obliged to have informed the parliamentary speaker of this, as were his colleagues on the committee.  No information was provided.  In July this year, an attempt was made to get Lozovy’s parliamentary immunity waived in order for him to face the criminal charges.  That attempt failed.  If Lozovy’s amendment to the CPC comes into law, the very investigation will need to be dropped.

Horbatyuk is not the only person to have expressed concern over the new amendments.  Vitaly Shabunin, Director of the  Anti-Corruption Centre [AntAC] points out that this amendment will have irreversible consequences for investigations into all kinds of grave and especially grave crimes.  The new version of the CPC will thus “make it impossible to bring dangerous criminals, from murderers and terrorists to people guilty of corrupt dealings,  to justice”.   In fact, an exception is made for cases directly involving murder, but this would not cover investigations into the deaths of Maidan.

The situation in the case of MPs is especially cynical, since all it would take is for the regulatory committee which needs to give the permission for criminal proceedings to drag this process out, and the case will need to be terminated.

According to Shabunin, most of the National Anti-Corruption Burea’s investigations reach the court after an investigation lasting more than a year.  In complex tasks, the investigators may need to obtain information from abroad, etc., and all of this takes time.

In calling on the President to veto this law, the Rehabilitation Package of Reform Platform point out the danger of the Lozovy amendment leading to paralysis of the system of criminal justice, with it especially impeding Maidan crime investigations and those involving corrupt dealings.  The situation is especially absurd since the new norms create a legal clash with the provisions of the Criminal Code on time bars for bringing people to answer.

There are also other failings in the amendments.  Articles 242-244 and 332 of the CPC will mean that only the court can commission an expert assessment.  This deprives the defence of a fundamental right under adversarial proceedings to independently appoint such an assessment, while the prosecution will also be forced to await permission from the court.  Amendments to Article 7 of the Law on Forensic Assessments will also mean that only state specialized institutions will be allowed to issue such assessments, which still further narrows a  person’s right to defence.

It is frustrating that the concerns above were forced some time ago, yet the bill now only needs the President to ignore civic calls to veto and to sign Draft Bill No. 6232 for disastrous amendments to come into force.