There are over forty Crimean political prisoners in Russian-occupied Crimea or Russia, and that figure is rising.  Access to information and contact with them is limited, with Russia clearly hoping that people will forget about them.  A letter just received from Yevhen Panov makes it quite clear how much our letters mean to the imprisoned men.

Yevhen Panov has been held prisoner since he was seized by the Russian FSB in August 2016.  He has withstood all forms of physical and psychological pressure from his captors, but it cannot be easy, and moments of despair are more than understandable.  It is in those moments that the support he receives from people in his home city of Enerhodar, from others in Ukraine and throughout the world means so much.

“Hello, Ukraine and my beloved city Enerhodar! Hello, dear Ukrainians and all those in the world who wrote me letters when the letters reached me!

I am very grateful to you all for your support and when, as they say, “gloom descends”, I re-read the letters that came to me in Lefortovo Prison [in Moscow], and it is as though I become charged with energy from them.  This is particularly the case when I am “successfully” isolated from any information, from radio or newspapers, not to mention television.

I don’t know when all of this will end, but if you don’t have faith, then there’s no sense living. I’m not able, of course, to write beautiful letters, but I write as it is, what I’m feeling is what I put on paper. I don’t have enough  time to write and express it all now, but I can at least thank you a bit in this way for your support.  I can’t not be grateful!”

He ends with a few words in Ukrainian, apologising for the letter being in Russian.  In fact, although he suggests that this is because he would make mistakes, having not spoken Ukrainian for over a year, any letters to and from political prisoners have to be in Russian to have any chance of reaching the addressee. 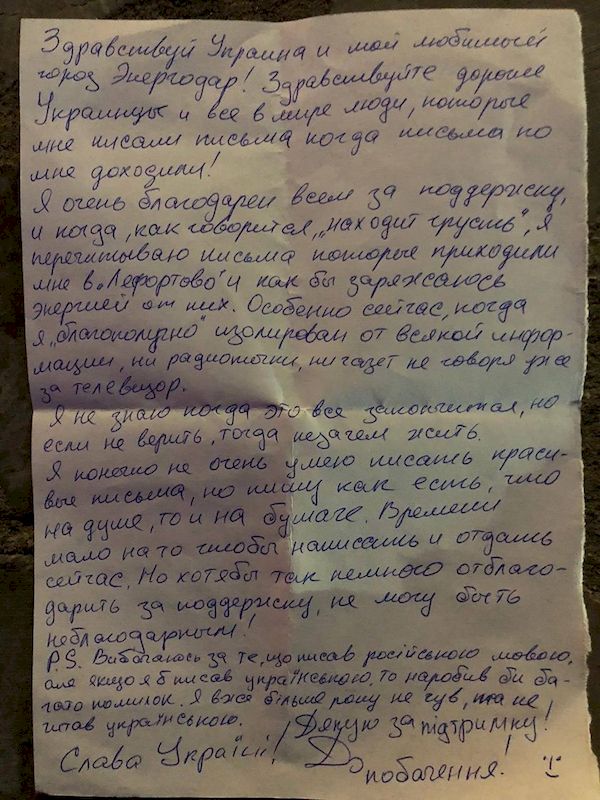 Panov is one of four men whom the FSB extracted ‘confessions’ from in early August 2016, in Russia’s attempt to claim to have foiled terrorist acts planned by the Ukrainian Defence Ministry’s military intelligence and targeting critically important parts of Crimea’s infrastructure.  All four men remain imprisoned, however two of them – Redvan Suleymanov; and Volodymyr Prysich - were eventually convicted of charges that bore little or no relation to these supposed confessions. A third person, Andriy Zakhtei, recently agreed to give up his lawyer and ‘admit guilt’ in exchange for a milder sentence.  His account of the torture he was initially subjected to is part of any application to the European Court of Human Rights which is unlikely to take this new ‘confession’, obtained after months of appalling conditions in detention and heavy FSB pressure, seriously.

Panov was the first person whose detention was reported, and is probably Russia’s greatest miscalculation. The torture used to obtain his ‘confession’ was too obvious, and the efforts to prevent him seeing a real lawyer thwarted by the European Court of Human Rights who intervened after he had been held for two months without any access to the lawyer his family had appointed.

Panov is a driver at the Zaporizhya Nuclear Power Plant in Enerhodar, who had also been very active since Russia’s invasion of Crimea and war in Donbas as a volunteer, both in civil defence for his city and in helping the Ukrainian army.

On August 6, he responded to a phone call, seemingly from a fellow volunteer, asking him to help evacuate a family from Russian-occupied Crimea who were in danger. This, however, his family only discovered much later, after he disappeared.

On August 10, 2016, the FSB claimed that it had foiled terrorist acts planned by the Ukrainian Defence Ministry’s military intelligence and targeting critically important parts of Crimea’s infrastructure.  This was aimed, the FSB asserted, at destabilizing the situation in the run-up to Russia’s elections which were illegally taking place in occupied Crimea.

The claims were trumpeted by Russia’s leaders and state-controlled media, but based solely on videoed ‘confessions’ from the four men. The video with Panov’s ‘confession’ and, supposedly, his and Zakhtei’s stockpile of weapons was very sloppily done.  One scene for example showed a full moon which meant it must have been shot at least three weeks earlier and an independent forensic analysis found no traces to suggest that Panov and Zakhtei had ever touched the stockpile of weapons they were alleged to be using.

A video produced by the FSB was shown widely on state-controlled Russian media.  On it, Panov is seen ‘confessing’ to working for Ukrainian military intelligence and saying that he was invited to Kyiv and told that a group was being formed for acts of sabotage in Crimea. He reels off several names, none of them the people he was allegedly caught with, and says that they had come to Crimea together to decide on targets for the acts of sabotage and had chosen the ferry crossing, an oil handling terminal, a helicopter regiment and chemical factory.  Later they had hidden ammunition, etc. in a hiding place.  He mentions also that he was paid money for this.  All of this was supposed to be organized by Ukraine’s military intelligence.

Both Panov and Zakhtei were moved to Moscow shortly after that brief meeting and placed under heavy pressure to give up their independent lawyers.  Both refused and they were eventually moved back to the Crimea where the conditions in the Simferopol SIZO [remand unit] are in themselves a form of torture.

In his letter, Panov mentions that letters reached him in Moscow.  While it is true that letters cannot be sent by normal post from mainland Ukraine, and probably not from abroad, you can send letters to Yevhen via his brother Ihor Kotelyanets at the following address:  Kyiv Department of the New Postal Service No. 23,  writing FAO Kotelyanets, Ihor Anatolyevych, tel: 0999429089.