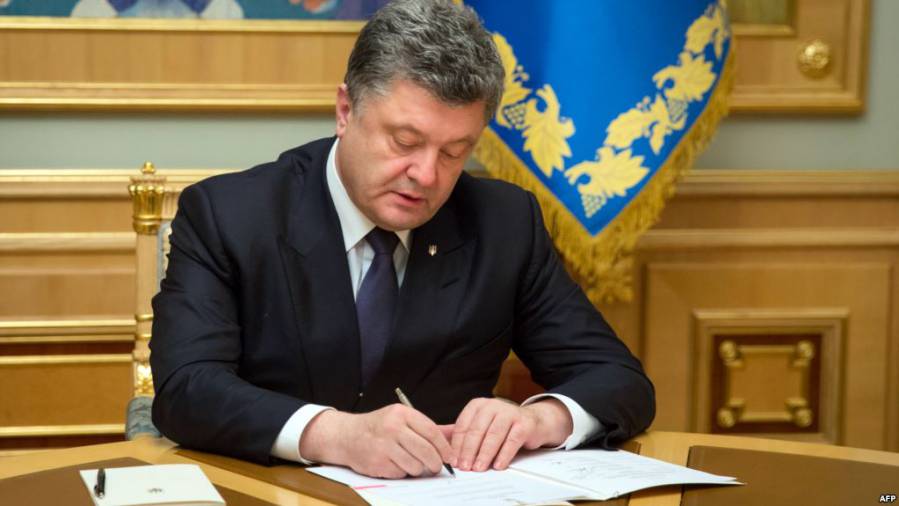 President Petro Poroshenko, who had resisted the demands of activists and Western allies to create an anticorruption court, gave in surprisingly and suddenly. (file photo)

KYIV -- While activists in Ukraine have welcomed news that Petro Poroshenko conceded to their demand to create an anticorruption court on October 4, their enthusiasm was curbed knowing that legislation that could hinder corruption investigations is awaiting the president’s signature.

The concession came just a day after parliament approved and sent on a contentious bill that would leave room for appeals that could handcuff the new court, a development that activists said was emblematic of Ukraine’s postrevolution struggle against entrenched corruption.

Poroshenko, who had resisted the demands of activists and Western allies to create an anticorruption court and even spoke out against doing so at the annual Yalta European Strategy (YES) forum in front of European leaders in Kyiv last month, gave in surprisingly and suddenly, saying that he would take responsibility for the creation of the court.

But he did so with a caveat -- that once signed into law there also be a new "specialized anticorruption chamber in the new Supreme Court that would be the appellate body in all anticorruption cases."

The Supreme Court has been heavily scrutinized of late, with the selection process for a new judge mired in scandal as 30 of the 120 candidates put forth failed to meet ethical standards or account for their assets, according to reports that cite the Public Integrity Council, a civil-society watchdog.

Still, anticorruption activists -- who say they have been targeted as part of a months-long campaign of intimidation and harassment, allegedly at the behest of government officials and vested interests who want to discredit them and see the push for an anticorruption court stopped dead in its tracks -- were elated.

"Vroom-vroom-vroom! Ooh la la! Bua ha ha!" wrote a surprised Daria Kaleniuk, executive director of the Kyiv-based NGO Anticorruption Action Center (AntAC) and a major proponent of the special court. "Now we expect the Presidential draft law on Anticorruption Court in the next days to be introduced in Rada," she added.

Indeed, the process is still far from completion; hence the more cautiously optimistic message from Kaleniuk’s colleague and head of the board at AntAC, Vitaliy Shabunin. "One and a half years of work by many very cool people and teams. This is far from a victory, but a serious step toward it," he wrote on his Facebook page.

While it remains unclear as to why, exactly, Poroshenko flipped on the issue, there is talk among some observers that the international pressure had become unbearable. Especially, they say, from the Venice Commission, an advisory body of the Council of Europe that is made up of constitutional-law experts.

Washington and the U.S. Embassy in Kyiv, in particular, have also been staunch supporters of the anticorruption court.

The news momentarily alleviated stress over what activists characterized as a negative development the day before. Ukraine’s parliament, the Verkhovna Rada, on October 3 passed a judicial-reform bill that some believe would make it almost impossible to investigate many criminal cases, including corruption cases against senior officials.

Poroshenko must sign the bill for it to become law, or veto it. The president has not signaled which way he is leaning, though it was his ruling party that helped push the bill through parliament.

The Kyiv Post, which reported on the bill’s passage and its details, said the legislation would also enable the functioning of the controversial new Supreme Court.

See also: Poroshenko must veto law that will terminate most investigations into Maidan crimes & corruption