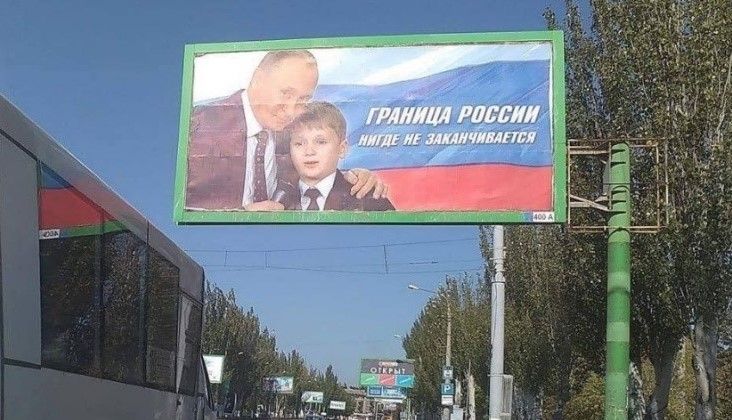 The two men – the head of the unit in charge of a particular part of the border with Russia in the Sumy oblast and his deputy – disappeared on October 3.  According to

Yury Butusov, Chief Editor of Censor.net,  the border at the place in question is not clearly marked in any way, and nothing to get in the way of an abduction.

It was reported then that Russia was refusing to negotiate, claiming that the men had illegally crossed the border, with this version also reported in the Russian media.  In breach of international law, Moscow refused to allow the Ukrainian consul to see the men.

On October 9, a Russian court remanded the men in custody for two months on charges both of ‘illegally crossing the border’ and of ‘deliberately disobeying law enforcement officers’.

Oleh Slobodan, spokesperson for the State Border Guard Service, believes that the latter charge, coupled with the refusal to allow the Ukrainian consul access to the men, suggests that they were seized with the use of force. Russia is now trying to hold them incommunicado both to exert psychological pressure on them, and to ensure that marks from physical violence fade.

The move seems ominously like hostage-taking to force an exchange of the Ukrainian border guards for two FSB border guards taken prisoner well inside the Kherson oblast on June 30, 2017.  As with the first Russian soldiers caught in Donbas, Russia claimed that the two men had ‘got lost’.

The two Russians had been found during the early hours (around 02.30) of June 30 on the shore of the Gulf of Perekop  They were stopped by a local border guard unit and Ukrainian soldiers, and had no papers with them, only their boat. They admitted to being military officers from the FSB Border Service, and claimed that they had been taking part in military exercises, supposedly playing the role of border infringers.

Unlike most occasions, Russia did not deny that the men were serving officers, and even officially asked Ukraine for information about the two allegedly ‘lost’ military officers.

There was initial outrage in Ukraine when a Kherson court appeared willing to impose a symbolic fine and a brief period of administrative detention, however Ukraine later charged the men with encroaching upon Ukraine’s territorial integrity.

Considering that Russia is illegally occupying Crimea and claiming the administrative border between Crimea and the Kherson oblast to be the Ukrainian – Russian border, the encroachment into Ukrainian territory could not be easily brushed off.  The angry resistance to any willingness to release the men, however, was also because of the large number of Ukrainians (which may have now reached 50) whom Russia is illegally holding prisoner on politically motivated charges or for their faith in Russia or occupied Crimea.  Russia is ignoring calls from the UN and all international bodies to release the men and exchanges of prisoners are one of the only options that have thus far been considered.  Russia tried to deny that two Russian military intelligence officers, Yevgeny Yerofeyev and Alexander Alexandrov, who were taken prisoner while fighting in the Luhansk oblast and killing a Ukrainian soldier, were serving officers, but did agree to an exchange of them for Ukrainian former military pilot and MP Nadiya Savchenko.  For Russia, this was one way of ensuring that the men did not later provide damaging testimony in international courts about Russia’s undeclared war against Ukraine.

It seems likely that it is trying to create the appearance of parity between two Ukrainian border guards who had absolutely no reason to stray into Russian territory, and the two FSB officers captured while very evidently in Ukrainian territory.

It is hard not to agree with Butusov that Russia’s seizure of the two border guards is an act of terrorism and there should be no compromise in Ukraine’s response.

As reported, this is one of at least four effective abductions by the Russian FSB in recent months.

Oleksiy Sizonovych, a 61-year-old pensioner was first captured by Kremlin-backed militants in the so-called ‘Luhansk people’s republic’ and then taken by force to Russia, where he was clearly put under pressure to refuse a proper lawyer and ‘confess’.  He was sentenced in July 2017 to 12 years’ imprisonment (details here).

19-year-old Pavlo Hryb was abducted by the FSB from Belarus and taken to Krasnodar where he is being held in detention without urgently needed medication  (details here).

Oleksandr Shumkov is a 28-year-old civic activist from the Kherson oblast, who was clearly either tricked into crossing into Russia or taken across the border by force. He is now held in detention and facing insane charges of involvement in an organization which is legal in Ukraine, but which Russia, for reasons of its own, has banned as ‘extremist’ (details here)