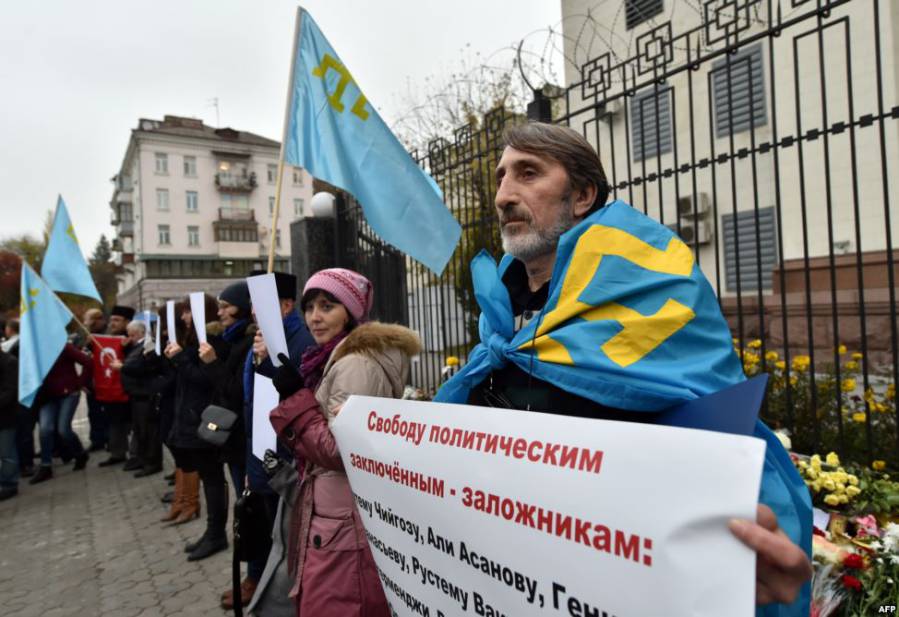 There are now at least 60 Ukrainians whom Russia is imprisoning on politically motivated charges or for their faith in Russia or in occupied Crimea. While it is undoubtedly Russia who is to blame for this situation and who holds the key to resolving it, Ukraine’s leaders could be doing a great deal more.  Prominent Crimean Tatar lawyer and rights activist Emil Kurbedinov has urged the Ukrainian government to formally recognize the status of Crimean political prisoners and their families.  He believes that such formal status will make it easier to help the ever-mounting number of political prisoners and their families.

There are no negotiations underway, and despite pleas from prisoners’ families, there remains no individual appointed to coordinate activities and provide the contact point for relatives.

It cannot be known whether this will help, since it hasn’t been tried.  Moscow has proven impervious to words of concern and outrage from the civilized world, but there are levers and western sanctions are undoubtedly hurting.

So are the ever-increasing number of abductions, arrests and ongoing imprisonment of Crimean Tatars and other Ukrainians, and systematic aid is needed.  In Crimea, the civic initiative Bizim Balalar [‘Our Children’] was launched by Crimean Tatar journalist Lilia Budzhurova as the number of children whose fathers had been taken from them inexorably rose.  After four new arrests on October 2, the number of children in need of both financial and psychological assistance had risen to 73.  With new arrests on October 11 of six Crimean Tatars, all with large families, that figure has now reached 100. Solely through donations, the initiative has been able to provide mothers with five thousand roubles [73 euro] a month for each child.  While it is wonderful that such an initiative has arisen, the number of political prisoners is on the increase and there needs to be systematic assistance from the government.  Some of Russia’s prisoners, such as Crimean Tatar leaders Akhtem Chiygoz and Ilmi Umerov, filmmaker Oleg Sentsov and civic activist Oleksandr Kolchenko, were targeted because of their loyalty to Ukraine and peaceful defence of the country’s interests.  They and others are all Ukrainians and victims of persecution, in need of support.

There had appeared to be some progress.  In May this year the Ministry on Occupied Territory and Internally Displaced Persons prepared a draft bill which would declare those Ukrainians held prisoner on political grounds in Russian-occupied Crimea and Russia as political prisoners and provide state assistance for their families.  There were various problems identified at the time, but Minister Vadim Chernysh expressed willingness to work with NGOs on this and support for a coordination centre for all matters related to political prisoners, with this to be within his ministry.

Mustafa Dzhemilev, veteran Crimean Tatar leader and Ukrainian MP, tabled that bill in parliament in July, and there have been assurances that it could be adopted this autumn.  The bill, as on the website, will need reworking to assure that prisoners and their families are not left out due to a definition of political prisoner that is too narrow.  It must, for example, cover the 24 Ukrainian Muslims who are effectively imprisoned for their faith alone, as well as prisoners held in Russia, like Valentin Vyhivsky and Viktor Shur, who were held virtually incommunicado and almost certainly tortured into confessing to ‘spying’ charges. The same applies to Oleksiy Sizonovych, the 61-year-old pensioner recently sentenced to 12 years after being captured by Kremlin-backed militants in Donbas and taken by force to Russia,

It is not only support for families that must be considered.  Russia is currently flouting international law, not only by prosecuting Ukrainians on trumped up charges, but also by imprisoning them thousands of kilometres from their homes.  The sheer cost of travelling so far can be prohibitive, making it difficult for lawyers and the person’s family to maintain even that degree of contact.

Getting the prisoners freed and home

Ihor Kotelyanets is speaking for many relatives when he expresses frustration with how little the Ukrainian authorities are doing to get his brother Yevhen Panov and other prisoners released.

He meets with representatives of the EU and embassies, who ask him what specific measures are being taken.  As far as he and the other relatives are aware, there are no specific measures – no clear format for negotiations, no individual responsible for this.

The Crimean Human Rights Group recently put together a list of judges implicated in politically motivated trials.  There are some in Crimea who are responsible for the knowingly wrongful conviction or detention of a number of prisoners. In each politically motivated prosecution, however, there are others who should be named and targeted for sanctions.  Simply informing people of the names is not sufficient, and here the government could provide invaluable assistance.

Perhaps the new draft bill will resolve some of the problems.  If and when it gets passed.  In the meantime, the number of political prisoners is increasing and action needed now.

The list below of Ukrainians already held prisoner on politically motivated and / or fabricated charges in Russia or Russian-occupied Crimea is increasing at an alarming rate.  There are too many to give details of each case below, but please press the hyperlinks for more information.  Crimean Tatar leader Ilmi Umerov is facing a two-year sentence, though the appeal has not yet been heard..

Ilmi Umerov (sentenced to two years for his opposition to Russia’s occupation of Crimea, the sentence has been appealed)