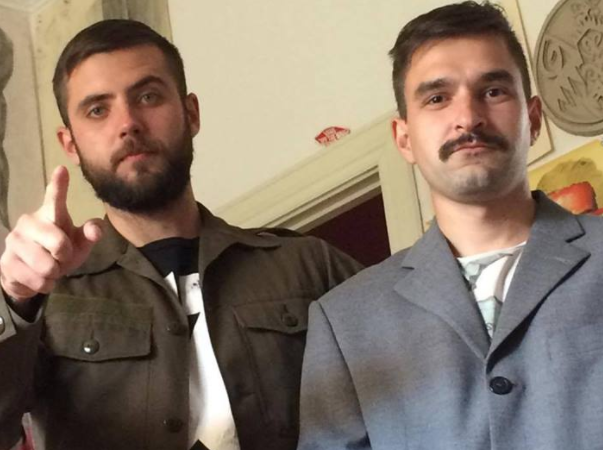 Civic activists have reacted with strong scepticism to the claims made by the Lviv SBU [Security Service] in explaining the searches and detention on October 12 of up to 12 activists, including two well-known Crimeans, forced to flee their home after Russia’s invasion.

The SBU arrived early on Thursday morning at the flats of at least six members of «Автономний опір» [“Autonomous Resistance’, hereafter AR], a movement of left-wing nationalists (as they describe themselves).  All were taken away for questioning, and though apparently later released, the searches lasted until around 9 p.m. and the SBU website states that the criminal proceedings launched are on extremely serious charges.

The SBU report has been criticized for its similarity to those of its Russian counterpart, the FSB.  There is certainly the same disregard for the presumption of innocence, with the text entitled: “The Lviv SBU has uncovered a group carrying out paid provocation”.  It is asserted that the group carried out protests aimed at provocation at the commission of the aggressor state, a category at present referring solely to Russia.

There are some alarming assertions, such as that the “offenders, hiding behind social banners, took part in protests, commissioned by Kremlin propagandists”.  The SBU is supposed to have recorded how “members of the group circulated material on social media aimed at destabilizing the political situation in the region”. It is claimed that a “comprehensive linguistic expert assessment established that there were public calls to the violent overthrowing of the regime in the publications circulated on the Internet”.

It is not quite clear how there could be any such ‘expert assessment’ since the criminal proceedings have apparently only just been initiated, and the activists certainly unaware before Thursday that they were under suspicion.  The proceedings initiated are supposedly over ‘action aimed at the violent change or overthrowing of the constitutional order’ (Article 109 § 2 of Ukraine’s Criminal Code) and ‘encroaching on Ukraine’s territorial integrity and inviolability’ (Article 110 § 2).  The latter could carry a prison sentence of up to ten years. 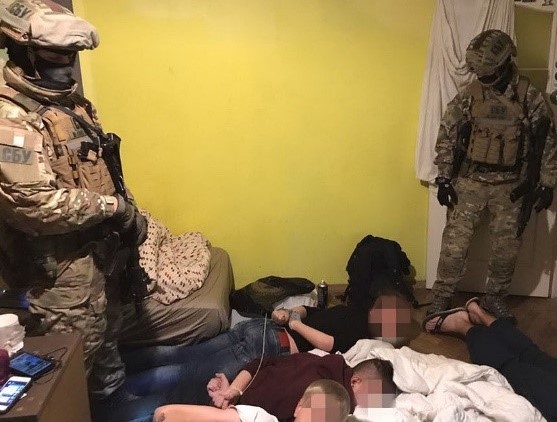 The ‘material evidence’ removed from the flats: several knives, gas cannisters and computers.

According to Anna Ivanshchyk from AR, members have faced searches in the past, normally before political events, and it seems likely that the measures this time are linked with the group’s planned ‘UPA March’ on October 14.  Supporters of the Ukrainian Insurgent Army or UPA traditionally mark the anniversary of the founding of UPA on 14 October 1942. Ivanshchyk says that as soon as her organization announced that “UPA Day is not a festive date for oligarchs, and we are for honouring specifically UPA fighters as those who fought for the liberation of the Ukrainian people, the SBU declared that a provocation was planned for 14 October.”  She asserts that in Lviv AR was, in fact, the only organization who announced plans for an UPA March, as the right-wing groups that traditionally mark this occasion (Right Centre, National Corps and VO Svoboda) were gathering up people for the march planned in Kyiv that day.

AR members have pronounced left-wing views, and they have in the past clashed with right-wing activists. According to AR, the clashes on Nov 6, 2016 occurred after they were attacked by right-wing members of Right-Sector and the Azov Civil Corps.  Certainly the AR event, a march to honour the anarchist Nestor Makhno, had been banned seemingly in part because of likely conflict given that the far-right openly vowed to prevent the march.

If the SBU has proof of such work for Russia or of plans to overthrow the constitutional order in Ukraine, they should present it, since the allegations, at least with respect to the two activists from Crimea, have been met with contemptuous derision by human rights activists who know the men.

Olga Skrypnyk, head of the Crimea Human Rights Group, called the SBU allegations about Crimean activists Denis Matsola and Maxim Osadchuk in the same style and manner of presenting material as that of Kremlin-controlled Russian media.  She says that for her and her colleagues, who are actively gathering evidence of Russia’s aggression and human rights violations in Crimea, it was a shock to see the SBU announcement as though copy-pasted from FSB reports.

No facts, no legal terms, and certainly no specific examples to back the allegations, she says, just propagandist formulations and hate speech, with terms like ‘commissioned by Kremlin propagandists’ and ‘radicals’.

If ignored, such abuse could lead to any protests or dissatisfaction with government policy ending up being labelled ‘commissioned by representatives of the aggressor state’ and any criticism being qualified as “destabilization of the political situation in the region”.

Similar expressions of concern have come from a number of civic activists, such as Maxim Butkevych, Oleksandra Dvoretska and Alim Aliev, from CrimeaSOS.

Maxim Osadchuk and Denis Matsola are well-known to all Crimean civic activists.  They took part in the Crimean Euromaidan events, and in protest against Russia’s invasion.  Maxim is ideologically very close to his friend Oleksandr Kolchenko, who was arrested, together with filmmaker Oleg Sentsov and two other opponents of Russian occupation. Both Kolchenko who was sentenced after a farcical ‘trial’ in Russia to 10 years and Sentsov (20 years) are recognized internationally as political prisoners.  Osadchuk and Matsola have both taken active part in all protests in support of Kolchenko, Sentsov and other Ukrainian political prisoners in Crimea and Russia.  Maksym Osadchuk spent over a year defending Ukraine in Donbas as part of the Aidar Volunteer Battalion.

In December 2014 Osadchuk, in military gear, gave an interview to Hromadske.ua in which he spoke of the fate of Sentsov and Kolchenko, and of the path he chose, namely to fight in Aidar.

“Have I become disillusioned with my ideas? Not at all. I saw Russian soldiers, technology, I understood and understand that there is a war raging against an aggressor.  It’s simply that in the rear I feel more useful to my country”.