Crimean Tatars have reacted to the new arrests on ‘terrorism’ charges of civic activists in Russian-occupied Crimea by holding single-person pickets with placards reading: “Crimean Tatars are not terrorists.  Give children their fathers back” and “Fabricating criminal cases – it’s this that’s TERROR”.

Even according to the draconian anti-protest legislation which Russia is illegally applying in Crimea, there was nothing at all illegal about the single-person Crimean Tatar pickets on October 14 which do not require permission.  This did not stop the Russian-controlled police from detaining 49 people, and claiming that they had been taking part in ‘unauthorized pickets’.  That there was nothing illegal is clear from the fact that police spoke of infringements of the law, yet only demanded ‘explanations’ from the detained picketers and held so-called prophylactic talks before releasing them.

Prominent lawyer Emil Kurbedinov warned that there had been many cases where the picketers were taken away by ununiformed men in apparently private cars.  He asked people to be especially vigilant and video all such occasions.

The reasons for such concern are chillingly clear.  Since Russia’s invasion and occupation of Crimea, a number of Crimean Tatars and civic activists have disappeared without trace.  The worst wave of such disappearances was in 2014, however Crimean Tatar activist Ervin Ibragimov was abducted from near his home on 24 May 2016, and has not been seen since.  There was an apparent attempt to abduct human rights activist Emir-Usein Kuku a year earlier, on April 20, 2015.  The attempt failed after Kuku’s calls for help were heard and a crowd gathered.  It was only then that this apparent attack / abduction by unidentified individuals turned into an FSB search.  Seven months later Kuku was accused of ‘extremism’, and then on February 11, 2016 was arrested for supposed involvement in Hizb ut-Tahrir, an organization that is legal in Ukraine but that Russia has called ‘terrorist’.  He is now facing a 10-year sentence or longer on these fabricated charges.

The pickets on Saturday came after the latest armed searches and arrests of Crimean Tatars on October 11.  Six men, a number of them activists from Crimea Solidarity, the initiative launched to help political prisoners and their families, were arrested and are now facing the same fabricated Hizb ut-Tahrir ‘terrorism’ charges.  Around 11 other men were detained and received large fines merely for having come out in solidarity and tried to video and photograph the searches and arrests.

There are now (at least) 100 children whose fathers have been arrested on spurious charges. 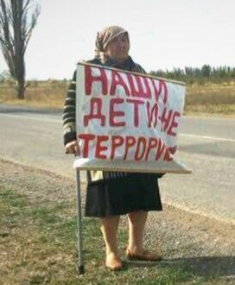 Our children are not terrorists!

Many of those taking part in the solitary pickets on Saturday were men (and at least one woman) in their sixties or older.   This has been a moving feature of the peaceful resistance to Russia’s repression, and the reaction has demonstrated the lengths that the occupation regime will go.  Server Karametov, a frail 76-year-old Crimean Tatar with grave health problems, was seized from outside the High Court where he was standing with a placard reading: “Putin, our children are not terrorists’, fined and jailed for ten days (details here).

That act of shocking brutality also prompted a wave of other pickets, with similar placards, often held by men of retirement age.  Several were detained and one heavily fined.

On Saturday, there were around 100 single-person pickets, with people from quite different generations.

Russia’s cynical arrest on ‘terrorism’ charges of men who have taken an active, but peaceful civic stand, demonstrates the courage which any Crimean Tatar needs to come out onto such protests.  The events on Saturday showed clearly that Russia’s efforts to terrorize Crimean Tatars into silence and collaboration are not working.