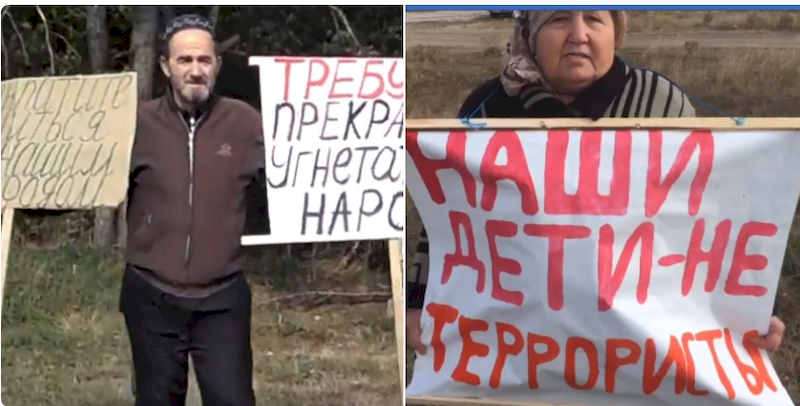 As reported, over a hundred Crimean Tatars stood on peaceful single-person pickets in different parts of Crimea throughout Oct. 14.  They held placards reading, for example, “Crimean Tatars are not terrorists.  Give children their fathers back” and “Fabricating criminal cases – it’s this that’s TERROR”.  The message on other placards pointed out that the Soviet regime had claimed Crimean Tatars were ‘traitors’ to try to justify the Deportation of 1944; now Russia was calling them ‘terrorists or extremists’.   There was a wide range of ages, with some men, and one woman, who seemed in their sixties or older (video here).

Russia has illegally imposed its draconian anti-protest legislation in occupied Crimea, yet even this legislation allows single-person pickets without these requiring any permit.  This did not stop the Russian-controlled police from detaining 49 people for supposed “violation of the requirements of the federal law on meetings, rallies, demonstrations, processions and pickets”.

There were no infringements, which is evident from the fact that the police only demanded ‘explanations’ from the detained picketers and held so-called prophylactic talks before releasing them.  The same has thus far been true of the men summoned for questioning after the pickets.   Some have cited their constitutional right to not answer such questions, others have taken the opportunity to explain to the police exactly why they came out onto the highway or street in peaceful protest.

Grilled about a supposed ‘organizer’, one of the activists answered that the organizer was his heart that could not endure what they were seeing any longer and had prompted him to go out in protest.  There were probably many such hearts, he said.

While the enforcement bodies stopped short of doing more than detaining Crimean Tatars and removing their placards, they did claim the pickets to have been “unlawful public events’ and said from the outset that they planned to identify and prosecute those who organized and took part in them.

Crimean lawyer Lilya Gemedzhy told Krym.Realii that the nature of the questions put to the activists summoned suggests that they are planning to find a scapegoat whom they will claim to have been the organizer of what they try to call ‘unlawful’ or ‘unauthorized’ events.

Although single-person pickets are legal, Russia under President Vladimir Putin has reverted to old KGB tactics.  One of these is to use provocateurs who attach themselves to the solitary picketer, with police materializing immediately.  This was hard to achieve on Saturday, partly because there were often other activists standing at a distance and videoing any harassment by police.

In fact, the grilling  – about where people got the marker pens, etc. – actually highlights the lack of any centralized ‘organization’.  People had very different placards, both from the point of view of what they said, and the presentation.

One of the most common messages was that ‘Our children / the Crimean Tatar people are not terrorists and not extremists”.   This was not ‘organized’, but was doubtless inspired by the placard, with the words “Putin, our children are not terrorists’, which frail 76-year-old Server Karametov held when he tried to stand in solitary picket outside the ‘trial’ of Crimean Tatar leader Akhtem Chiygoz on August 8.  The elderly Crimean Tatar with grave health issues ended up not only fined, but actually imprisoned for ten days (details here).

The pickets were an enforced measure in the face of new arrests and mounting repression.   On October 2, for example, four Crimean Tatars were arrested on charges of involvement in Tablighi Jamaat, an organization which Russia has labelled ‘extremist’.  Then on Oct. 11, six men, including at least two civic activists, were arrested and accused of either organizing or being involved in Hizb ut-Tahrir, a peaceful pan-Islamist organization which is legal in Ukraine.  This brought to 25 the number of Crimean Muslims facing huge sentences for unproven involvement in an organization which is not known to have committed any act of terrorism or violence anywhere in the world.  Russia declared it ‘terrorist’ for reasons of its own, and is now, with particular cynicism, applying such repression on illegally occupied territory, with 100 children growing up without their fathers.

Russia began its arrests of supposed ‘terrorists’ back in May 2014, with the arrests and imprisonment of Ukrainian filmmaker Oleg Sentsov, civic activist Oleksandr Kolchenko and two other opponents of annexation.  They remain imprisoned as do the above-mentioned 29 Crimean Muslims and 10 men arrested as part of entirely unproven ‘sabotage plots’.   All of this despite not one act of terrorism or sabotage.