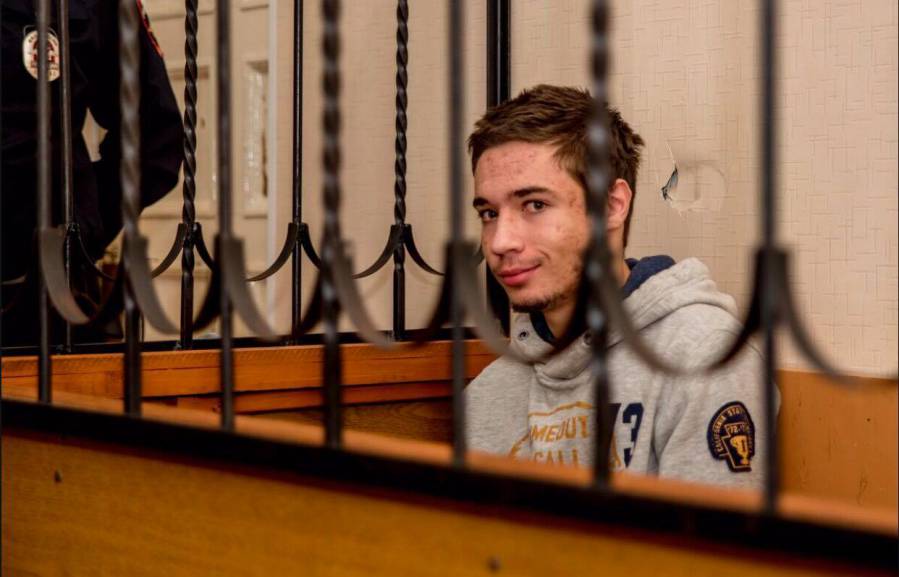 The doctor who has treated 19-year-old Pavlo Hryb since early childhood has warned of potentially grave consequences if Russia continues to refuse the young Ukrainian proper medical treatment.  Instead of allowing Ukrainian doctors to examine Hryb, as demanded by the European Court of Human Rights, Russia’s FSB has instead concentrated on circulating misleading information about the young man and the charges against him.  Since Pavlo’s Russian lawyer, Andrei Sabinin, has been forced to sign an undertaking not to divulge any information, details are scant but quite sufficient to expose the serious flaws in the claims made.

Despite the restrictions placed upon him, Sabinin has been able to provide enough information about Hryb’s condition and the continuing failure to provide him with medication to arouse concern.  The young man does not look well and is himself very worried that he will not receive the qualified medical care and medication which his condition requires.

It is likely that this is deliberate policy aimed at increasing pressure on the young man who was initially refused access to a lawyer or the Ukrainian consul.  Once the European Court of Human Rights intervened, Russia could no longer maintain his total isolation.  It has instead carried out an imitation medical examination and is now claiming that Hryb does not have any condition that would prevent him being held in custody.

This was accepted by the court in Krasnodar who on Oct 18 extended his detention until 4 January 2018.  It is unlikely to convince the Court in Strasbourg, as it flies in the face of medical documentation chronicling a lifelong serious diagnosis which has meant he has permanent disability status and which forced him to take a break from his university studies within months after commencing.

At a press conference on Oct 18, Vasyl Prytula, Professor of the Faculty of Pediatric Surgery at the Bohomolets National Medical University and Hryb’s doctor, spoke of the young man’s condition which even under normal conditions would be classified as of medium severity.  Where the patient is under stress and in unfavourable conditions, and deprived of supporting therapy, his state of health can only be qualified as grave.

He added that the details provided by Sabinin of ulcers on Hryb’s face, and possibly elsewhere, his bloodshot eyes and weakness could herald haemorrhages or other complications.  People with Hryb’s diagnosis, he explains, need to be treated in high-level hospitals.  His is a complicated illness that not all doctors know how to treat.

His colleague, Professor Yury Kuchin drew attention to the lack of any need to hold the young man in a SIZO [remand prison], which is simply inhumane given the potential dangers, even to life, for a person in his condition.

As reported, a team of doctors, including Prytula, who has treated Pavlo since he was four, were prevented from seeing the young man on Oct 12.

Both the court ruling extending detention, and a report evidently circulated to the media, provided disturbing omissions and allegations.

The most glaring omission came in the failure to mention that Hryb was seized by unidentified individuals in Belarus and taken against his will across the border into Russia.

The Russian version of reality, just like three years ago, when Ukrainian military pilot and then MP Nadiya Savchenko was abducted from Ukraine, claims that the young man was apprehended in the Smolensk oblast of Russia.

Russia has also tried to claim that he was declared on the international wanted list “among member-states of Interpol”.  Had there genuinely been some kind of Interpol Red Notice on the adolescent, then proper procedure needed to be set in motion.  That does not include kidnapping.

It became evident only during the court hearing that the FSB are claiming that Hryb encouraged his 17-year-old Russian girlfriend to plant a self-made explosive device in a school on June 30, 2017.  He is supposed to have done this by Skype from March 27 to April 13, 2017.

The two young people had met on the Internet and believed themselves to be in love.  They corresponded all the time, on all kinds of subjects.

There are some major problems with the FSB’s story.  There are no records of those Skype conversations, but there are of the later correspondence between the two adolescents.  From a month after the alleged mention of a plan to commit an act of terrorism, there is not one word about it.  Not before the alleged date chosen, not on the day, nor afterwards.  Nothing at all to back the FSB’s claim.

This is particularly suspect given that the FSB themselves, who apparently discovered this plan, did not say or do anything.  Yet on July 4, they allegedly launched a criminal investigation, with this involving a search of the young Russian girl’s flat.   By July 28, the FSB had designated Hryb as the ‘accused’ in this story, and they then set about intimidating the young girl into persuading Pavlo to meet her in Belarus, from where he was kidnapped and taken to Russia.

Yevhenia Zakrevska, the Ukrainian lawyer dealing directly with the European Court of Human Rights, is openly sceptical about the FSB’s ‘plot’.  She believes it conceivable that the two adolescents may have made some impulsive and less-than-serious comments about an explosion in the school that Tatyana hated and was leaving,  This might explain the claim made that Hryb has ‘admitted’ the charges.  The young man would have confirmed only that he had written a phrase shown to him.

Had this ‘explosive device’ been any more than a throw-off remark during animated and constant correspondence between the two young people, why was there never any mention of it again, let alone any indication of real plans to carry it out?

Worth noting that the young girl told journalists shortly after it became clear that Pavlo had been abducted, that she had been threatened with prosecution herself by the FSB, with the price extracted for waiving this clearly being to help them seize the young Ukrainian.

The version first published by Kommersant and then reposted widely, with its insistence on the young man’s supposedly radical nationalist views, is all very reminiscent of the politically motivated seizures and subsequent ‘trials’ of Ukrainians, such as Ukrainian filmmaker Oleg Sentsov, civic activist Oleksandr Kolchenko, Mykola Karpyuk and Stanislav Klykh and others, which began in 2014.  The release of all these political prisoners, who like Hryb had never set foot in Russia, and whose ‘radicalism’ was unproven, has been repeatedly demanded by international structures, such as the EU, PACE and OSCE, by human rights organizations and the international community.