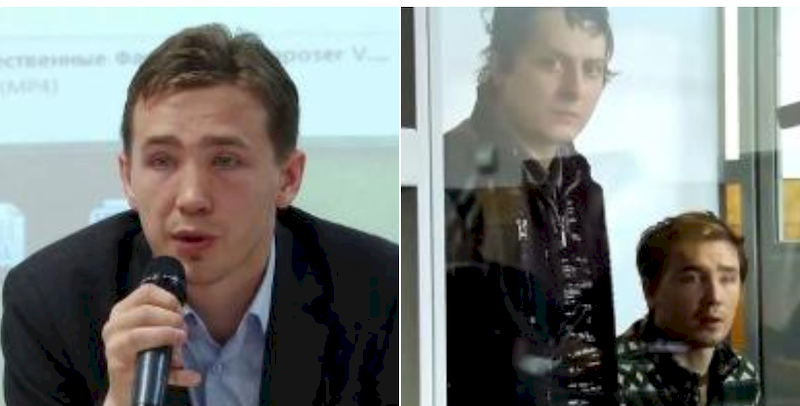 The two Ukrainians were convicted of providing “material, organizational or other help in the formation or activities of a terrorist organization” (Article 258-3 § 1), with the court accepting that the provision of assistance to the self-proclaimed ‘Donbas people’s republic’ [DPR] fell within this article of Ukraine’s Criminal Code.

Timonin was also found guilty of public calls to commit acts of terrorism (Article 258-2 of the 2006 edition of the Criminal Code) and of incitement to enmity based on race, nationality, religious views, etc. (Article 161).  The 5-year sentences passed for this (imprisonment, restriction of liberty, respectively) are to be served in parallel with the 9-year sentence.

The two men, who have been in custody since November 2015, denied all charges, with Timonin claiming that the highly inflammatory posts on his social media (VKontakte) page, on which the extra two charges were based, were not his.  The defence also disputed the classification of DPR as a terrorist organization.

Both men were also members of the Public Council under Ukraine’s Ministry of Information Policy, with Vasylets even the Deputy Chair.  This has caused embarrassment and some questions raised in the Ministry and in media circles. It has also been used by those supporting the men to push the idea that Vasylets is a journalist and human rights activist, and his imprisonment an attack on freedom of speech.   Such allegations were exacerbated by the length of time that the men were held in custody and the constant postponement of court hearings.  None of this is necessarily anything unusual in Ukraine, but the lengthy proceedings did make it difficult to assess the case.

The sentences were passed on September 29 and the verdict is now available.  An appeal will certainly have been lodged which will probably again assert that the men’s involvement in setting up Novorossiya TV was not proven and that there are no grounds, or legal precedent for calling DPR a terrorist organization.  Whether the claim will form part of the appeal is unclear, but Russian and pro-Russian media have tended to present the men as seeking only the truth and have called them political prisoners.

It is for the courts to determine the merits of this case and the following is intended, as far as possible, to simply set out the facts thus far.

Vasylets and Timonin both denied all charges, and asserted that neither had had anything to do with setting up Novorossiya TV.  The verdict, set out on 25 pages, lists all the evidence which does appear to refute this claim.  The posts which form the justification for the specific charges in Timonin’s case allegedly appear on his VKontakte pages, however this cannot be checked as the pages have now been hidden and require special authorization to see.

Novorossiya TV was, and largely, remains part of that propaganda machine.  Vasylets’ claim that he sought to tell ‘the truth’ about what was happening is simply not borne out by the considerable evidence remaining of the distorted picture that such channels sought to achieve, and the methods used to do so.

Journalists working for the Russian state media were also under no illusions about what was required of them.  The Chief Editor of a mainstream channel in Russia told the staff that the 1970s and 80s were child’s play in comparison to the cold war now beginning.  Those unwilling to take part in such a ‘war’ were advised to find a job away from the media. The majority who remained received instructions from the management who were themselves briefed in the Kremlin, on subjects not to be touched, on terms to be used for Ukrainians, etc.

While Vasylets’ motivation is unclear, Timonin, who is from Berdychiv, where the trial took place, was an active participant in Anti-Maidan, and strongly supported the pro-Russian militants in Donbas.

The posts which served as the basis for the charges of incitement propose “to get rid of Maidan scum” [the original is more offensive] and to seize police stocks of arms and use them for a purge of members of the Right Sector nationalist organization.  The VKontakte page cited in the verdict is hidden and, in any case, it would require professionals to ascertain that material had been posted by somebody else.  It is not clear whether such an analysis was carried out.

The stiff 9-year sentence passed on Vasylets and Timonin is not totally unprecedented.  In July 2017, the Donetsk Regional Court of Appeal upheld five-year sentences passed on two young men for creating several social network groups with a pronounced anti-Ukrainian, pro-militant position.  The charges were of encroaching upon Ukraine’s territorial integrity and inviolability (Article 110 § 2 of the Ukrainian Criminal Code).

The main charge against the two men is, however, different, since the crime is of helping a terrorist organization or group.  As mentioned, the men’s lawyers argued that the indictment was unsustainable, claiming that no other country or international body has recognized the so-called ‘Donetsk and Luhansk people’s republics’ as terrorist.

Ukraine’s use of the term ‘anti-terrorist operation’ for the military conflict in Donbas, rather than formally calling it a war, has been criticised for various reasons, though at least at the beginning – during the period to which the charges pertain – Ukraine was scarcely in a position to formally declare war, and Russia has, with zero credibility, denied its involvement.

In fact, the judges of the Berdychiv Court did not find the defence’s arguments convincing.  They point out that according to Ukraine’s Law on Fighting Terrorism, “an organization is recognized as terrorist if at least one of its structural subdivisions carries out terrorist activities with the knowledge of at least one of the organization’s leaders.”  The DPR, they say, falls under this definition.

Whether or not other countries have formally called DPR a terrorist organization, several have brought charges, under terrorism legislation, against their own citizens for fighting in Donbas.  In June 2017, the Czech Republic became the latest country to bring charges against a national, reportedly for involvement in plans to carry out a terrorist attack in Donbas while allegedly fighting for the militants. In May 2016, Estonia ruled that an Estonian citizen, Vladimir Polyakov, should be extradited to Ukraine to face terrorism charges under the same article of the Criminal Code as that against Vasylets and Timonin.

The most telling example to date is that of Benjamin Stimson, a Briton who was jailed in July this year for five years and four months under the UK Terrorism Act for his part in the fighting in Donbas on the side of the Russian and Russian-backed militants.  This was the first time in the UK that terrorism charges had been laid over involvement on the side of the militants in fighting in Donbas, though people have been prosecuted under the same law for fighting on the side of the so-called ‘Islamic State’. The charge against Stimson stated that he had had “the intention of committing acts of terrorism assisted by others through becoming a member of the militia opposing the Ukrainian government and serving as a soldier within the militia.”   The BBC quoted a top police official as saying that Stimson “has been jailed for the role he played in a violent conflict and I hope his conviction will send a message to all those who are even considering joining conflicts."