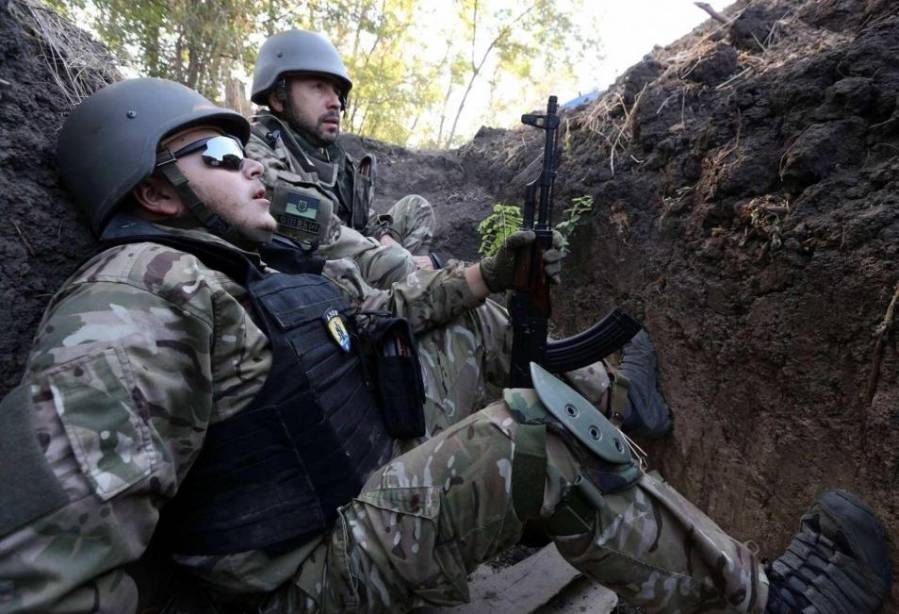 One Russian has been jailed for over three years, and another, extradited from Tajikistan, is about to be put on trial in Russia for taking part in the fighting in Donbas on the side of Ukraine.  The ‘trial in absentia’ has also just begun in Moscow of Roman Zheleznov, a somewhat notorious Russian supporter of the Azov Battalion.  The FSB and Russian courts treat anybody supporting Ukraine as a ‘mercenary’, while notorious mercenary Arseny Pavlov [‘Motorola’] and other Russians who died fighting against the Ukrainian government are considered as ‘heroes of Donbas’ and even get their own official monument.

On October 31, the FSB reported that a Russian, identified only as from Kopeisk (Chelyabinsk oblast) had been sentenced by the Kopeisk City Court to three years and three months.  He was found guilty of acting as a mercenary in armed action [Article 359 § 3 of Russia’s criminal code], of ‘public calls to carry out extremist activities’ [Article 280 § 1] and ‘inciting hatred or enmity’ [Article 282 § 1].

There is no indication of what evidence was provided for the FSB claims that the person had gone to fight as a mercenary for the Azov Battalion in November 2014, and also that he held Nazi views.

The chances of the young man having been paid for fighting in the Azov Battalion are remote.  It was, in fact, precisely in November 2014 that Azov formally ceased being a volunteer battalion and was taken under the Ukrainian Interior Ministry’s jurisdiction.  The battalion was initiated by men with pronounced far-right, even neo-Nazi, views (shared by Roman Zheleznov), and though any such ideological slant is denied, the Battalion has remained controversial.  It has attracted some volunteers from other countries, and it is possible that this time, the anonymous individual really did fight on Ukraine’s side.

It is, however, possible that he did not, and the unwillingness to even provide a name seems suspicious.  Russia has systematically demonized any Ukrainian nationalist or far-right organization, and concocted ‘trials’ against Ukrainians out of nothing.  Crimean filmmaker Oleg Sentsov and left-wing anarchist Oleksandr Kolchenko remain in Russian prisons over three years after the FSB came up with a fictitious ‘Right Sector’ plot.  The fact that Kolchenko’s (quite likely also Sentsov’s) views are diametrically opposed to those of members of Right Sector was of no interest to the FSB or Russian courts.

A very young Ukrainian, Maxim Filatov, is currently serving a 6-year sentence in Russia, though there is nothing to suggest that he was a member of Azov and the charges against him seem as surreal as those against Sentsov and Kolchenko.

The unnamed Kopeisk resident has received a lighter sentence than another Russian, Artem Shirobokov, who was sentenced by a Samara court in June 2017 to five years’ imprisonment.  The main charge - of ‘taking part in an armed conflict as a mercenary’ was the same but there was a crucial difference Shirobokov was ‘tried’ in absentia, as he has been living in Ukraine since 2014.  Russia has also brought criminal proceedings against another Russian, Dmitry Fedotov, on identical charges, though fortunately does not know where he is.

It is frustrating that other post-Soviet republics are helping Russia to carry out such selective prosecutions.  Interfax reported on November 2 that Tajikistan had handed a Dagestani Firuz Mirzoev over to Russia to face the same charges of acting as a mercenary.

The message, however, is clear: if you have fought on the Ukrainian side in Donbas, you can expect imprisonment as a ‘mercenary’ in Russia.

This is categorically not the case if a person fought on the side of the so-called ‘Donetsk and Luhansk people’s republics’ [DPR, LPR, respectively].  They are invariably claimed to have been ‘volunteers’ in Donbas.  This includes Viktor Ageyev, the 22-year-old Russian, who himself admits being a contract soldier and the two Russian military intelligence officers – Yevgeny Yerofeyev and Alexander Aleksandrov  - caught fighting in the Luhansk oblast.

There has been no attempt to investigate compelling evidence of war crimes committed by former Russian military intelligence officer Igor Girkin; neo-Nazi sadists Alexei Milchakov and Yan Petrovsky and many others.  A St Petersburg lawyer even publicly demanded a criminal investigation into likely war crimes committed by Girkin following one of the latter’s many very open interviews.  The demand was ignored, and in the case of Milchakov and Petrovsky, both have taken part in training camps for fighters in Donbas, linked with an organization almost certainly receiving Kremlin funding.  Milchakov has also spoken openly about the money he and his comrades receive for their killing services in Donbas.

More details emerged recently of the scale and the money used to recruit Russians willing to fight Russia’s undeclared wars in Ukraine and Syria.  The new documents about people fighting in the so-called Wagner Private Military Company give the lie to Moscow’s claims that all Russians fighting against the Ukrainian army in Donbas are there as ‘volunteers’, and this is not only because of the money they earn.  Several men have received fully-fledged Russian military awards for their part in key battles, they use weapons only available to the military and train at a base adjacent to one run by the Defence Ministry.  The trail also clearly leads to Yevgeny Prigozhin, a billionaire who owes his wealth to his close connections to Russian President Vladimir fighting against the Ukrainian government in Donbas from back in 2014.

The claim that this is a ‘private’ military formation enables Moscow to deny any direct involvement, although the PMC closely follows the regime’s political moves abroad.

Fighting as a mercenary is illegal in Russia, yet not one of the men known to have fought in Donbas or Syria has been prosecuted back in Russia.  Quite the contrary:  46-year-old Utkin and his deputy – 54-year-old Andrei Troshev -   were present at a Putin-hosted Kremlin reception on December 9, 2016, marking ‘Hero of the Fatherland Day’, and Korotkov has found evidence of other fighters receiving military awards, some, like the men who died in the battle for Debaltseve, posthumously.

There is also plenty of evidence, including testimony from soldiers or their families, that Russian soldiers are paid extra to fight in Donbas (See: Russian Soldiers Sent to Ukraine Tracked by Hypermarkets and Unmarked Graves