Children to undergo compulsory military training in both Russia and occupied Crimea Russia plans huge propaganda New Year tree in Mariupol while residents freeze in bombed city Russian propaganda media and ex-President guilty of direct incitement to genocide in Ukraine, report finds90% of teachers in occupied Melitopol refuse to collaborate with Russian invaders Children trained to be ‘Putin’s faithful soldiers’ in Russian-occupied Crimea Ukrainian writer and civic activist abducted and tortured for Russian propaganda video Ukrainian kids from occupied Melitopol indoctrinated and enlisted in Russia’s ‘Youth Army’ Russia Today sacks presenter who calls for kids to be drowned, but has no problem with calls to genocide against UkraineRussia plans special propaganda ‘lesson’ explaining to children in occupied Ukraine why the bombing of their cities is ‘liberation’Director of Amnesty International in Ukraine resigns in protest calling controversial Amnesty press release "a tool of Russian propaganda’ Russian horrific castration of Ukrainian POW was about terror and preventing own soldiers from surrendering “Let’s Fight the Propaganda Together” Anti-war Activities in Russia, 9-16 July 2022Large protest in Russian-devastated Mariupol after pensioners die trying to find drinking water Russia begins propaganda of war against Ukraine at pre-school level Russia moves to eradicate Ukraine from schools in occupied Mariupol, Kherson and ZaporizhzhiaRussia uses abducted Ukrainians for propaganda video claiming Ukraine is bombing ‘liberated’ MelitopolAfter destroying Mariupol, Russia offers its victims money but only if they agree to blame Ukraine Russian invaders fire on evacuation buses, abduct driver for propaganda video Russia plans total ‘filtration’ of Mariupol men and forced ‘mobilization’Russia destroys Mariupol and tries to get illegally deported residents to move to Siberia
• Topics / Freedom of expression

Russia’s TV: Russia praised as a “global power” and warnings about the revolution 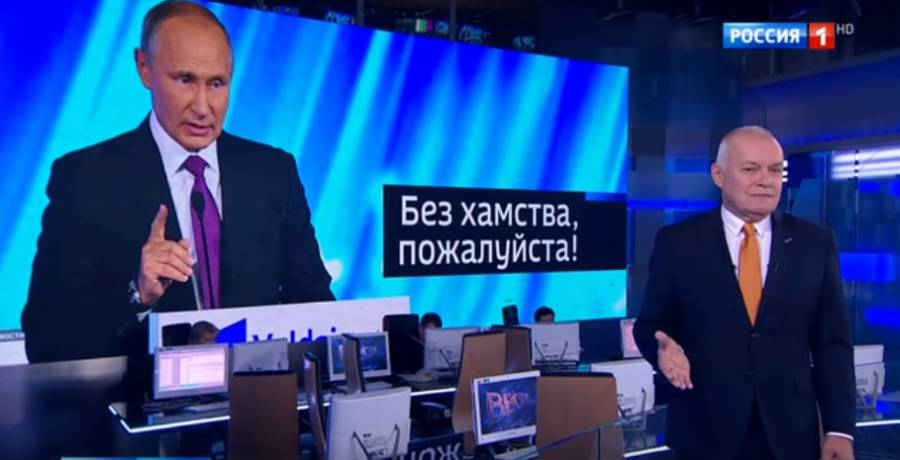 The news shows’ agenda in Russia is carefully attuned to serve the Kremlin’s needs.

Therefore, following Russian state controlled media sheds light on our understanding of how the Kremlin seeks to influence the Russian-speaking audience in Russia and beyond. Read our story here.

Our monitoring of pro-Kremlin disinformation also reveals that many of the themes set out in Russia’s most popular state TV news programmes find their way into European outlets.

“The global imperium of liberal capitalism has crashed into another imperium alike: the Islamic State. I do not place them exactly on the same shelf, but essentially they are close to each other, as both are based on ideology.”

It was referred to as a “Munich 2” and compared to the speech Putin made at the Munich security conference in Germany 2007.

Russia’s strengthening international role in the future was praised in the political talk shows: Russia is “acting as the global arbiter warning others and making them listen”, “the question is who will rule the world in the 21st century, the US and the West or the East”.

A juxtaposition between the West exercising double standards and dictating to others what to do – that would lead mankind to chaos and is now manifested in the degradation of international institutions and contempt of international law – and Russia as an “effective alternative” and “a constructive, reasonable and responsible approach to international policy” was constantly underlined.

A view that Russian government believes that the US and Russia should make a deal based on the principles of the 1945 Yalta conference agreements is expressed on one of the talk shows – the aim is to “divide the world and spheres of influence”, when Russia should actually “ensure change of power, division of powers, independent courts and respect for private property”.

“The idea of Putin’s speech at the Valdai conference is: Already for 100 years there is a great revolution going on in Russia, and we offer the world to use our invaluable revolutionary experience”

1917 revolution: “Warning against trying to use violence”

The 100th anniversary of the 1917 Bolshevik revolution was finally the focus of the talk show “60 minut” on TV channel Rossiya 1. Official Russia has shown a demonstrative lack of interest in the anniversary that appears to be too controversial form the Kremlin’s point of view.

During the debate, the West is accused of trying to impose its own vision of the revolution on Russia. The leader of the Communist Party Gennady Zyuganov states that “the whole world” is marking the 100th anniversary of the Great Revolution, but the other voices expressed say the revolution was a disaster for Russia, and Vladimir Lenin is brand as a traitor and a German spy.

The broadcast time is also used for alerting the people about the threat of the revolution: “It should be a lesson for our young people, and a warning against trying to use violence as a solution to social problems”.