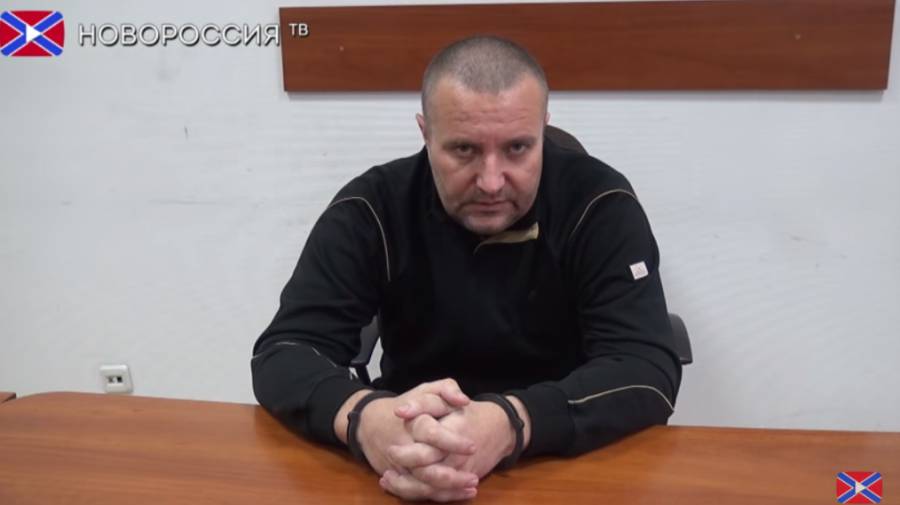 Another Ukrainian has been taken prisoner in the self-proclaimed ‘Donetsk people’s republic’ [DPR] and accused of working for Ukraine’s SBU [security service].  Oleksandr Polishchuk’s ‘confessions’ on video would elicit humour were it not for the regular reports of unnamed ‘spies’ and ‘saboteurs’ being sentenced to up to 22 years’’ imprisonment.  DPR leader Oleksandr Zakharchenko has also recently suggested that people he called ‘spies’ might simply be shot.

The story this time is that Polishchuk was detained by the SBU on a trumped-up pretext in Volnovakha, which is under Ukrainian government control.  The SBU supposedly used pressure and threats against his relatives, living both in ‘DPR’ and in government-controlled Ukraine, to get Polishchuk to cooperate with them.

The report claims that he was supposed to ‘abduct’ a high-ranking ‘DPR’ official, but since he was being wanted by the ‘DPR ministry of state security’, he was detained while receiving this task.

In fact, the ‘videoed confession’ does not quite match this. As well as the standard task of providing information about the movement of military technology, Polishchuk reels off three questions he was supposedly asked by the SBU.  Was there a substance that could be used to kill a person?; could he provide a blank death certificate, not from the institution where he worked? And could he find funeral parlour employees who could transport the body?  On the tape, he suggests that all three are perfectly easy to achieve, and then promptly goes back to talking about using his mobile to inform of military movements.

The Russia-backed ‘republics’ are closely following Russian FSB tactics, including with such videoed ‘confessions’.  Unlike many other occasions, Polishchuk is in handcuffs but shows no obvious signs of ill-treatment.

It is possible that the entire video is an exercise aimed at convincing the population that 1) their ‘state security ministry’ is vigilant and that the SBU are out to commit such acts of duplicity and violent sabotage.

It is, unfortunately, more than likely that a person has been detained, and will be held imprisoned until a ‘trial’ and huge ‘sentence’.  In October alone, one unnamed person was sentenced to 19 years; an unnamed woman and man were sentenced to 14 years; and a resident of Makiyivka, identified as ‘S’ got 22 years.

On 10 October, Zakharchenko announced in the middle of an interview that the ‘security services’ of the so-called ‘DPR’ and ‘Luhansk people’s republic’ [‘LPR’] regularly detained people he called ‘saboteurs’.   He said that “these saboteurs will most likely be shot. The authorities must show their teeth, or we’ll get a wave of treason without any fear”.

There is nothing to suggest that there are any grounds at all to the charges laid against any of the people held prisoner whose identifies are known.

In ‘DPR’ these include: