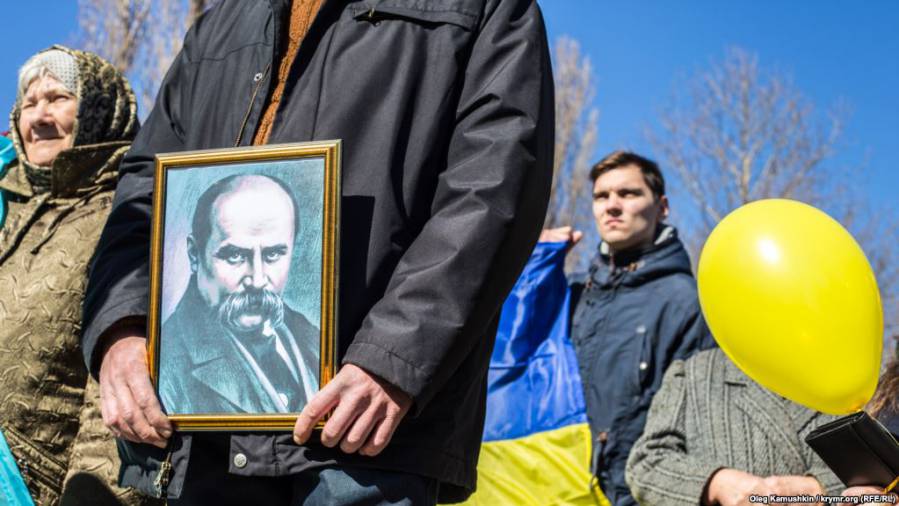 Despite an apparently clear commitment, Russia has done nothing to comply with the demands issued by the UN International Court of Justice back in April 2017.  The Crimean Tatar Mejlis remains banned, and the situation with the Ukrainian language, especially in Crimean schools is, if anything, more catastrophic.  The removal of Ukrainian is as deliberate as Russia’s persecution of the Mejlis, although on paper it looks less obvious, with parents terrorised into themselves giving up on Ukrainian-language classes for their children.

Oleksandr Sedov from the Crimean Human Rights Group says that Russia is doing nothing to ease access to education, either in Ukrainian or in Crimean Tatar, and there are absolutely no grounds for expecting an improvement in the near future.

“The only Ukrainian-language school in Feodosia is still working but the question is how formal the approach is to the supposed language of tuition. In other secondary schools, they call a parents’ gathering at the end of each school year and ask the parents to decide what language they want their children to be taught in the following year. Most choose Russian at the emphatic ‘recommendation’ of the teachers and school head. And people are simply afraid to demonstrate their Ukrainian identity since the propaganda is making Ukrainians into ‘enemies of the people’.  In fact, the situation is possibly getting worse”.

The issue, Sedov stresses, is not just that Crimeans’ right to education is being infringed.  Russia is using all means to try to assimilate the population to make it easier later to hold on to the territory it is illegally occupying, or at least retain its influence.

As reported, Russia is also using repressive measures, including the threat of imprisonment on fabricated charges, to force Crimean Tatars and other Ukrainians to leave their homeland.  Crimean Tatar leaders have long warned that Russia is also bringing in people from Russia, a ploy that Vladimir Putin, the former KGB officer now third-term Russian President  probably recalls from Soviet times.

Putin has continued to claim that Russia’s intervention was needed to ‘protect’ ethnic Russians and Russian-speakers in Crimea. On the eve of that invasion, 90.7% of school students studied in Russian; 6.5% in Ukrainian; and 2.7% in Crimean Tatar.  99.2% of all Crimean children studied Russian as a subject.  There were 7 schools with the entire program in Ukrainian and 15 in Crimean Tatar, as well as several schools with two languages.

Russia wasted no time in ensuring that even that top-heavy situation became still further stacked against Ukrainian and, to a lesser extent, Crimean Tatar.  The Crimean Human Rights Group reports that by the 2014/2015 school year only one of 532 schools in Crimea had a full program in Ukrainian.  The overall number of classes in Ukrainian had fallen from 875 to 163.   By 2016, there were only 28 classes, meaning that only 371 children were receiving education in Ukrainian.  This was 0.2% of the overall number of children at school in Crimea.

Serhiy Stukanov, the coordinator of a project on the position of the Ukrainian language in Ukraine, warns that all NGOs are forced to rely solely on official statistics from the occupation authorities which may be inflated.  Even the official figures demonstrate that the situation is  catastrophic.

In its decision on April 19, the Court found prima facie jurisdiction on both complaints, and agreed to Ukraine’s request for provisional measures over discrimination in occupied Crimea.  By a majority of 13 votes to 3, it ordered Russia to “refrain from maintaining or imposing limitations on the ability of the Crimean Tatar community to conserve its representative institutions, including the Mejlis”.  The order to “ensure the availability of education in the Ukrainian language” was passed unanimously.

Although Putin’s press security Dmitry Peskov had stated unequivocally that Russia would comply with the ICJ’s ruling, no measures have been taken.

Members of the Ukrainian National-Cultural Society of Sevastopol who held a meeting on May 4 with the director of the de facto Sevastopol department of education were told that Ukrainian was not a state language and that lessons could only be extra-curricular.

Russia’s constitution of Crimea, in fact, names three state languages – Ukrainian, Crimean Tatar and Russian.  These are not the only rights that exist only on paper, however.