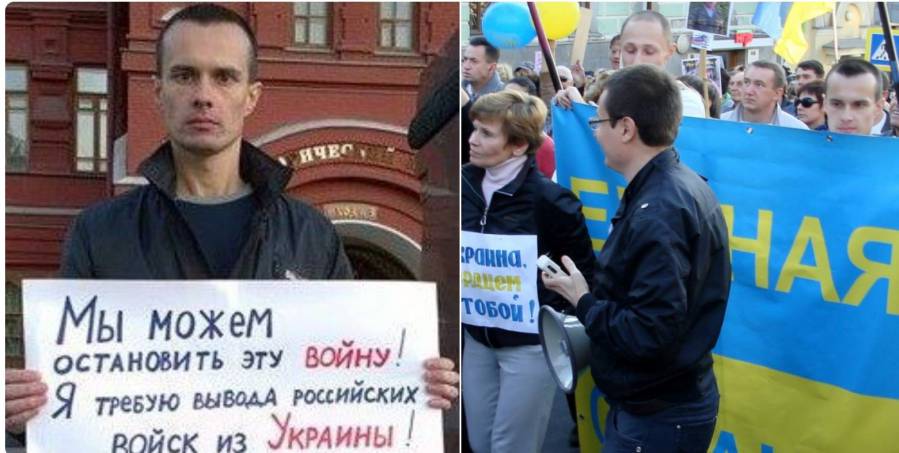 Bakholdin took part in protests against Russia’s invasion of Crimea and undeclared war in Donbas for many months in 2014, before leaving for Ukraine where he had been living.  He set off for Russia to visit his mother who was in ill health on March 9 2017, and was seized by Russian border guards.  His mother was officially informed on March 17 that her son had been arrested in Russia, supposedly “while trying to illegally cross the Russian-Ukrainian border”.

He has been imprisoned ever since, although the renowned Memorial Human Rights Centre pointed out back on October 19 that the criminal proceedings were continuing despite the lack of a real crime, and that there were signs that evidence was being falsified.

The formal charges were brought by Bryansk Investigative Committee ‘investigator on particularly important cases’ A.S. Shpakov on November 7.  The surreal opus is worth reading in its entirety, but the following is a summary of the key points.

It should be stressed that Bakholdin’s opposition activities in Russia were against Vladimir Putin and Moscow’s aggression against Ukraine, which is not at all synonymous with fighting the political order.

He did, however, oppose the “pro-Russian supporters’, many of whom were Russian nationals, whom Russia has paid and armed to fight against the Ukrainian Army.

The document acknowledges that Bakholdin left Russia on Oct 23, 2014, meaning that the charges against him are based on the Russian’s involvement while in Ukraine in Right Sector, an organization which Russia demonizes and has banned as ‘extremist’, but which is entirely legal in Ukraine.

Bakholdin is charged, on the basis of his alleged involvement in Right Sector, with involvement in an ‘extremist society’ (under Article 282.2 § 2 of the Russian criminal code).  As mentioned, this could carry a sentence of up to six years.

The ‘extremist behaviour’ of this organization, according to the Russian investigator, was seen in taking part in Right Sector military action in Donbas from 04 to 12 July 2015.

There had been concern that the Investigative Committee might try to accuse Bakholdin of being a ‘mercenary’, which could carry an even higher sentence.

As reported. Russia has begun imprisoning its own citizens for fighting on Ukraine’s side, with the fact of the men’s support for Ukraine being treated as ‘mercenary activities’ without any evidence that the men had been paid.

There is, in contrast, overwhelming evidence of huge numbers of Russians sent to fight in Donbas on the Kremlin-backed militant side for remuneration.  Such fighters are treated as volunteers and those killed, as ‘heroes’.

Svetlana Sidorkina, who is representing Bakholdin, has been forced to sign an undertaking not to divulge information about the case.  She has said, however, that the evidence the prosecution plans to present is on the level of ;supposition’, not proof.

Other activists, also living in exile in Ukraine, are pessimistic about the case.  Yelena Glushko has been campaigning actively to bring attention to Bakholdin’s plight and will attend the ‘trial’, but is certainly not expecting him to be acquitted.  Mikhail Agafonov agrees.  He says that he has never seen Bakholdin waving any Right Sector party card, but that doesn’t matter.

“All Russians who support Ukraine are accused of involvement in Right Sector.”

In the eyes of Russia’s Investigative Committee, he adds, “Right Sector is a synonym for Ukrainian patriotism which quite naturally stands in defence of Ukraine against Russian aggression.  In that sense, yes, Denis condemned Russian aggression and expressed his support for Ukraine”.