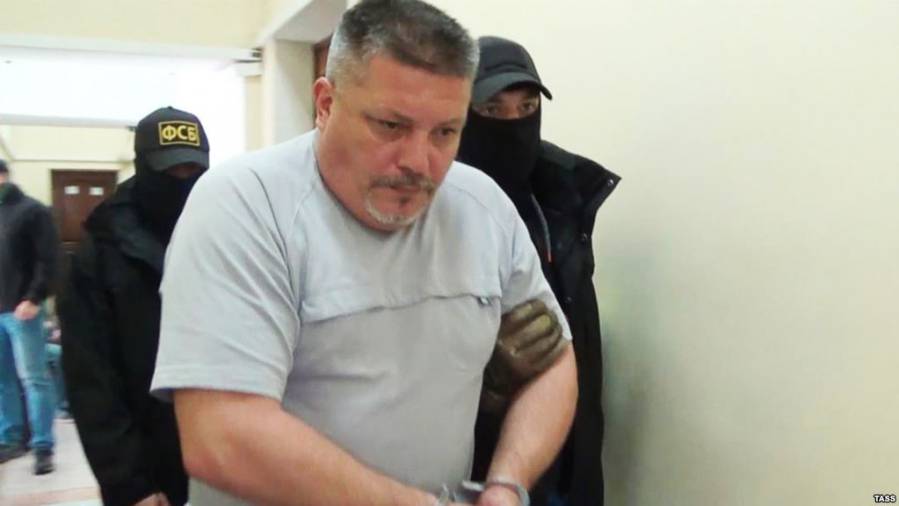 A court in Russian-occupied Crimea has sentenced internationally-known academic Dmytro Shtyblikov to five years’ maximum security imprisonment on wildly implausible ‘sabotage’ charges.  Shtyblikov had been prevented from seeing an independent lawyer for over a year, and there are very strong grounds for believing that physical or psychological pressure was used to get him to ‘confess’.

Shtyblikov’s brother Oleksiy has told the Crimean Human Rights Group that the ‘trial’ in the Sevastopol City Court on 16 November 2017 took all of 50 minutes, with the ‘court’ under presiding judge Gennady Vladimirovich Nikitin taking just five minutes to pass sentence.

It was reported back on May 18 that Shtyblikov had agreed to ‘admit guilt’. He has now been convicted of planning ‘sabotage’ under Article 281 of the Russian criminal code and of illegally procuring and holding ammunition and explosives (Article 222.1).  As well as the prison sentence, he was fined 200 thousand roubles.

It should be noted that the ‘weapons’ triumphantly displayed during the FSB videos of Shtyblikov’s arrest and the search of his home on November 9, 2016, were airguns from the academic’s sporting hobby.

Shtyblikov is one of five men arrested in the Russian FSB’s second supposed ‘Ukrainian saboteur’ case in 2016.

Three men were arrested on Nov. 9, 2016: Shtyblikov and Oleksiy Bessarabov, both Black Sea Fleet military analysts, and retired Ukrainian military officer Volodymyr Dudka.  The FSB did not give names, but claimed the men were “members of a sabotage – terrorist group of the Ukrainian Defence Ministry’s Central Intelligence Department” who were planning acts of sabotage on military and other infrastructure”.  Two much younger Crimeans  - Oleksiy Stohniy and Hlib Shabliy were arrested 10 days later.

The FSB report on Nov 10 asserted that “a powerful explosive device, weapons and ammunition, special communications devices and other material evidence” had been found.  Similar assertions were made after the seizure of Ukrainian filmmaker Oleg Sentsov, civic activist Oleksandr Kolchenko and two other Ukrainians in May 2014, and after arrests in August 2016.  The Sentsov allegations were quietly removed, while the alleged ammunitions stock ‘found’ in August 2016 had absolutely no DNA or other traces to link it with the men seized.

An FSB operational video was circulated to the Russian media, with this showing Shtyblikov being roughly pinned down and handcuffed by FSB officers, and then in his home.  The camera focused on the Ukrainian trident, a Ukrainian flag on the wall, and Dmytro Yarosh’s ‘Right Sector’ business card.  This worked on Russian propaganda channels, but was greeted with derision elsewhere.  An identical card had first been produced by Russia as ‘incriminating evidence’ in April 2014, after supposedly being pulled quite intact from a totally gutted out car.  As mentioned, the ‘incriminating’ weapons shown on the video proved to be airguns.

Shtyblikov was named as the supposed organizer of a sabotage plot.  There was no evidence to corroborate the claims, only videos produced with total disregard for procedure and in the absence of a lawyer.

It is telling that of the first three men seized, it was only Shtyblikov who was systematically prevented from seeing any (independent) lawyer, and he is now the only one who allegedly admitted guilt.  Just as damning is that Dudka, who was alone in being allowed to see a proper lawyer during the first month of detention, immediately stated that his ‘confession’ had been extracted through duress and threats to his family.

Shtyblikov’s family said back in the summer that they believed him to have been placed under great pressure, possibly with threats of some sort to his family.

As well as varying forms of pressure, the FSB also imposes virtually total secrecy over such prosecutions.  Dudka’s lawyer has been forced to sign an undertaking not to divulge any information, and it is unclear whether Bessarabov’s lawyer was chosen, or is somebody appointed by the investigators.

Bessarabov’s family are largely avoiding talking with anybody, including the other men’s families, although the three men do know each other.  For a decade until February 2014, Shtyblikov and Bessarabov worked together in the Nomos Centre for furthering research into geopolitical issues and Euro-Atlantic cooperation in the Black Sea Region.  47-year-old Shtyblikov was the Director of International Programs while 41-year-old Bessarabov was Deputy Editor of the journal ‘Black Sea Security’.  Dudka retired from his post as military sea captain for health reasons back in 2009.

It is probable that the ‘trials’ of Dudka and Bessarabov will be held behind closed doors. While the official reason is that the trial could involve state secrets, it seems at least as likely that the FSB does not want the lack of any evidence to be seen in open trial.

This would explain why Shtyblikov was prevented from having an independent lawyer, but the conclusion is also forced by the ‘trial and conviction’ of Ihor Stohniy. This was also held in secret, on July 17, 2017, with Stohniy charged under two articles of the Russian criminal code that were quite different from the spying for Ukraine that he ‘confessed’ to.   Most of the information originally came from a feature on Russian TV  Rossiya 24, entitled ‘The latest failure by Ukrainian intelligence: saboteurs failed to harm Crimea”  Stohniy, who was claimed to be an officer of Ukraine’s Military Intelligence [HUR], showed clear signs of having been very roughly treated, and the presenter (propaganda spin doctor Dmitry Kiselyov) asserted that he had been prepared for trouble and had taken a pistol (shown) and “therefore the special unit detained him very roughly”. According to Oksana Stohniy, her husband had set off for Kyiv to visit their daughter who is studying there. He was seized at night at the crossing point, not during the day as on the stunt video.

All five men are among the ever-increasing list of Ukrainians held prisoner in occupied Crimea whose release has been repeatedly demanded by the UN, PACE, European Parliament and other bodies.