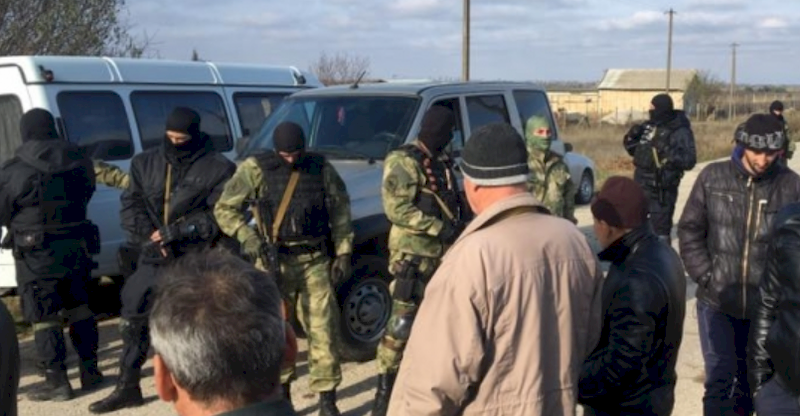 Searches began early on Thursday morning in Russian-occupied Crimea.  Armed men in masks first burst into the home of Lenara Mustafaeva, a school teacher of Crimean Tatar, and her husband Mustafa Mustafaev in the village of Pushkino.  The couple’s teenage son says that the men used force to get in, and the photos show that they smashed a glass door, though it is very unlikely that anybody would have tried to stop them ending peacefully.  The young lad also says that the men showed no documents.

Nothing at all was found, yet the officers took Mustafa away. In an ominous echo of the recent abduction and torture of Renat Paralamov , the officers claimed, when challenged by indignant neighbours, that Mustafaev had himself “expressed the wish” to go with them.  Later, they moved to Mustafaev’s elderly mother’s home, though there, after protests, they appear to have waited until a search warrant could be produced.  Once again they found nothing.

On Thursday evening, it was known only that Mustafaev had been taken to Sevastopol, and that his wife and one of their sons had followed the car taking him away.

They had strong grounds for concern.  On September 13, armed and masked men turned up at the family home of Renat Paralamov, a 31-year-old father of four.  Two of the men had FSB insignia which they hid after a crowd of neighbours and friends arrived to show solidarity.

The young Crimean Tatar was taken away, with all police stations and FSB offices throughout the day and evening denying any knowledge of him.  The following day a police officer told the crowd gathered that Paralamov  was at the FSB in Simferopol being questioned.  He claimed, citing the FSB, that Paralamov had been released the previous afternoon, but had allegedly arrived at the FSB ‘voluntarily’ “to add something to his explanation”.  He was taken to hospital scarcely able to walk and totally incapable of speaking.

He refused to be silenced and that same evening, together with lawyer Emil Kurbedinov spoke about the torture he had been subjected to.  He was held with a bag over his head from early evening on Wednesday, until around 1 p.m. on Thursday. They dealt blows to his body and also took down his trousers and taped rods through which they periodically gave him electric shocks (details here).

Paralamov  has since moved his family to mainland Ukraine and given further details of the methods the FSB used those two days.   Speaking with obviously difficulty about what he went through, he explained that he had to speak out publicly, “or they’ll come for others” (in detail here).

If there were any grounds for suspecting Mustafaev of drug-related offences, why the secrecy and his effective disappearance?  Since soon after Russia’s invasion and annexation of Crimea, armed searches of Crimean Tatar homes have invariably been accompanied by claims that the masked men are looking for drugs and weapons.  They have not once been found.

Crimean Tatar activists also report the disturbing shooting of the home of Dzhafer Ametov in Kurske. Up till annexation, Ametov was a member of the local mejlis (Crimean Tatar self-governing body) and was three times on the local council.  He has since distanced himself from politics. 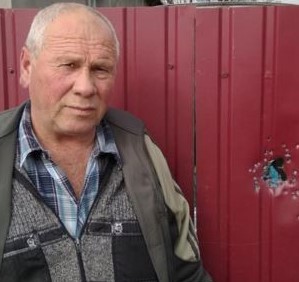 Dzhafer Ametov near the results of one of the gunshots fired

Zair Smedlayev, a prominent Crimean Tatar public figure, believes the attack was a method for terrorising Crimean Tatars in the neighbourhood.  Whoever was behind it can count on the de facto law enforcement bodies doing little or nothing in cases involving Crimean Tatars.  Smedlyaev noted the failure to find the killers of solitary protester Reshat Ametov, although the video of his abduction clearly shows the faces of the men responsible.  Nothing has been done to find abducted Crimean Tatar activist Ervin Ibragimov or those responsible for his abduction, although once again there is CCTV footage.  These are only the most brazen of many abductions / disappearances that have never been solved, and probably never investigated.