Russia causes the death of revered veteran of the Crimean Tatar National Movement, then tries to hide it 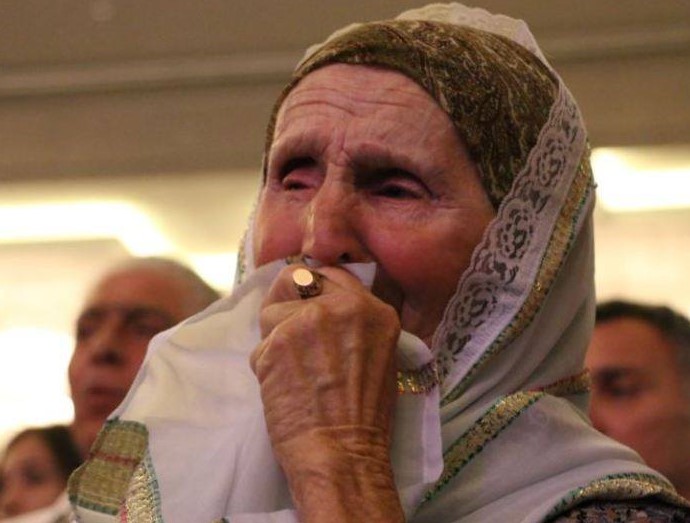 83-year-old Vedzhie Kashka, victim of the 1944 Deportation and veteran of the non-violent struggle of the Crimean Tatar people for their rights, died on November 23 after Russian FSB officers burst into a restaurant where she had been sitting and tried to detain her.   She had recently been unwell, and back in 2014 when the FSB first summoned her for interrogation, had suffered from heart problems.  Under such circumstances, it is impossible not to agree with Crimean Tatar leader Ilmi Umerov, that Russia has yet another death on their hands, that of an elderly woman of frail body but unbreakable will and commitment, who was deeply revered by Crimean Tatars and other Ukrainians.

When summoned back in 2014, Vedzhie Kashka  responded: ““I’m not a coward, and never hid before nor now, and I therefore came, but I don’t know why I was called.”

The armed searches and arrests on November 23 were of particular cynicism, as is seen in the report on Vedzhiye Kashka’s death in the Russian state-controlled RIA Novosti.  This claimed that “the elderly woman had received money from a foreigner and hidden it under her own clothes”.

Later that day, the same RIA Novosti went further, publishing a heavily edited video of the detentions, which left out Vedzhie Kashka altogether.

Everything about the arrests on Thursday and the FSB’s ‘special operation’ demonstrated immense cynicism, with the aim presumably to try to discredit the Crimean Tatar Mejlis.  Russia is flouting the International Court of Justice at the Hague, as well as the international community, in refusing to revoke its extraordinary ban on this self-governing body of the main indigenous people of Crimea.

Worth noting how RIA Novosti, having removed any mention of the attempt to arrest and the death caused of Vedzhie Kashka, reported this.  They claimed that the FSB and police had detained “members of the Crimean Tatar Mejlis” (with the words about the Mejlis in inverted commas, and with a footnote stating that the Mejlis (wrongly referred to as an ‘organization’) is banned in Russia.  The text asserts that they had “extorted 7 thousand dollars from a citizen of Turkey”.

The text blurs the true story, claiming only that the detained “Mejlis people had used 82-year-old Vedzhie Kashka as a go-between to receive a bribe.  She died as the result of the stress experienced”.

Journalist Anton Naumlyuk gives a quite different account of the events. Bekir Degermendzhy; Asan Chapukh and Kyazim Ametov were indeed detained in the café during this ‘special FSB and police operation’.  Vedzhie Kashka was with them.  She and Chapukh had left when the detentions began.  The armed men in full gear first burst into the part of the café where there were activities for children.  Even they proved capable of understanding that this was a mistake, and hurtled into the café, forcing the two men remaining to the ground.  Another unit went into the neighbouring restaurant where they tried to detain Chapukh and Vedzhie Kashka.  She became unwell and an ambulance was called.  She died on the way to the hospital. Apparently the ambulance simply stopped, and waited for the police to arrive.

Despite the charges supposedly being of ‘extortion’, the detained men were taken to the so-called ‘centre for countering extremism’.

Other FSB and police had forced Ruslan Trubach and his wife off a bus and detained him, as well as Kurtseit Abdullaev, and his brother Eldar.  The latter was later released.

The Degermendzhy home in Hrushevka was subjected to a search during which a computer, laptop and book about the political trial of Chiygoz, Mustafa Degermendzhy, Ali Asanov (and some others) were removed.  Other searches took place either during the day or in the evening, with some other people detained.  Why is entirely unclear.  Since the FSB and police twice burst into the wrong place first, it is more than possible that they didn’t much care whom they detained.

Turkish national Yusuf Aigan met with Vedzhie Kashka’s granddaughter in September and borrowed the amount of money mentioned.  He refused to return it, and the elderly lady therefore asked friends to help get it back.  They met with him and gave him two months to return the money, agreeing to meet again at the end of November.  He claimed that by then he would have been to Krasnodar and have got the money, and arranged to meet them in the Marakand Restaurant.

Whether he decided to keep the money and therefore turned to the FSB with his claims of ‘extortion’, or the FSB intervened to use this as a good pretext for persecution is not clear.  Whatever the order of events, the FSB are claiming to have acted on a formal statement from him, with surveillance and wire-tapping organized.

Vedzhie Kashka had wanted to meet Aigan “look him in the eye and say a few words”.  If the FSB had been carrying out surveillance, they surely knew that she would be present.

A pretend hand-over of the money Aigan owed was apparently carried out.  He probably sent a signal since it was after this that the special operation and detentions began.

Including the intended detention and  of an 83-year-old Crimean Tatar activist in ill-health, whose death the FSB are instead guilty of causing.