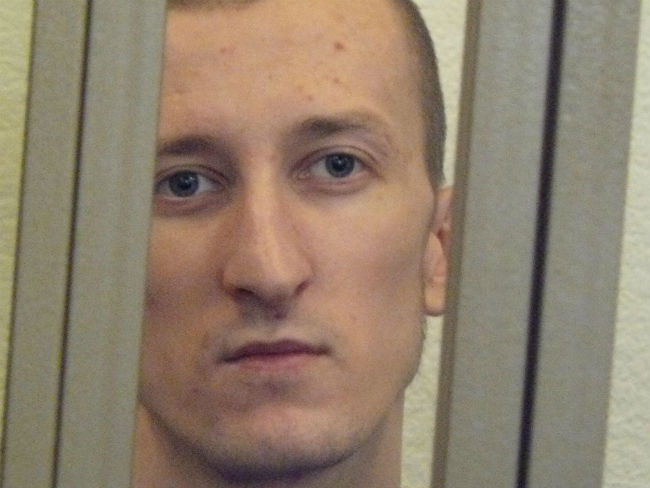 Oleksandr (Sasha) Kolchenko is spending a fourth birthday in Russian captivity, one of the first victims of Russia’s mounting appetite for fake ‘terrorism’ show trials, aimed at crushing dissent, and trying to provide justification for Russia’s invasion and occupation of Crimea.  He and Ukrainian filmmaker Oleg Sentsov are imprisoned about as far away from their families, the media and international diplomatic missions as Moscow could achieve, with Sentsov recently moved to an especially harsh prison north of the Arctic Circle to prevent any publicity.

The rapidly rising number of political prisoners; the fact that those with ‘dissident’ views, especially opposition to Russia’s occupation of Crimea’, and the unconvincing imitation of trials are just some of the ways in which Russia is increasingly following the Soviet Union’s tradition of political persecution.

Myroslav Marynovych was one of the founding members of the Ukrainian Helsinki Group in 1976, and paid for his courage with a long sentence in a political labour camp, then exile.  He recalls how important it was for him and other prisoners to receive letters from all over the world and to know that they had not been forgotten.

The same is true of  modern Russia’s Ukrainian political prisoners, for all of whom these letters are a lifeline.   With the trials these days potentially more visible, Russia’s FSB and investigators do everything they can to force prisoners before the trial to ‘confess’ and to reject independent lawyers.  That way they can get a sentence handed down without anybody having had a chance to look at charges that do not bear scrutiny. (information about writing letters at the end of the text.). Kolchenko, Sentsov and two other opponents of Russia’s invasion and occupation of their native Crimea (Gennady Afanasyev and Oleksiy Chirniy), were arrested in May 2014.  They were held incommunicado, then taken illegally to Moscow and only allowed to see lawyers after several weeks, almost certainly to hide the signs of torture.

The first statement from Russia’s FSB came five days after Ukraine’s presidential elections on May 25, 2014.  These proved a terrible blow to the Kremlin and Russian propaganda.  Not only had Ukrainians succeeded in uniting behind one candidate, and electing Petro Poroshenko, but they also demonstrated how little support the far-right in fact had.  The candidates representing Right Sector and the far-right Svoboda party could only muster 2% for both.

Russian TV reacted to this initially by lying, and producing a purported ‘real victory’ for the Right Sector candidate, but this could only be a temporary measure.

The FSB’s claims were extraordinary, and in many details never heard again.  They asserted Sentsov had been the mastermind behind a ‘Right Sector terrorist plot’ and that the other three were involved in and planning acts of terrorism.

Afanasyev and Chirniy both provided ‘confessions’ under torture (and received shorter sentences).  These were then used to justify the FSB’s grandiose claims about the alleged ‘plot’.

Sentsov had done nothing at all, yet he received the 20-year sentence that the FSB had threatened him with at the beginning when he refused to give false testimony, despite the torture applied.

Both men were almost immediately declared political prisoners by the Memorial Human Rights Centre.  Afanasyev was also recognized as a political prisoner after he stood up in court on August 31, 2015, and retracted all testimony as having been given under torture.

The court ignored the absurdity of the whole ‘case’ and Afanasyev’s retraction, and sentenced Sentsov to 20 years, Kolchenko to 10.  The two men stood arm in arm as the sentence was being read out, singing Ukraine’s national anthem. The proceedings had been called “an absolutely Stalinist trial” by one prominent human rights activist, and the sentence was condemned as “ideologically motivated terror” by a large number of prominent Russian writers, musicians, rights activists and others.

Russia is also continuing its attempts to foist Russian citizenship on the men, despite both men’s emphatic rejection of any such moves.

(Happy Birthday!  Wishing you health, courage and happiness, and that you will soon be released.  You are not forgotten. )