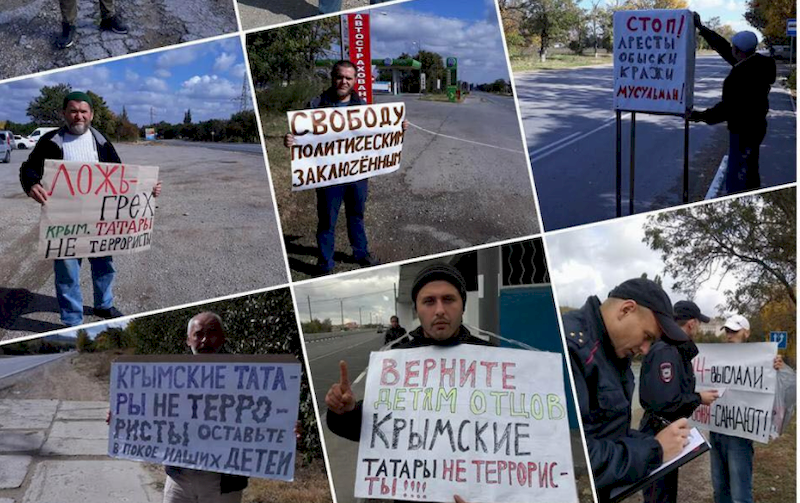 In its zeal to prevent the truth being told about its political repression in occupied Crimea, Russia is even flouting its own legislation.  At very least three Crimean Tatars are now facing administrative charges for entirely legal single-person pickets on October 14.  This comes after multiple summonses and attempts by the Russian FSB to hunt down the ‘organizers’ of the pickets, and the number of prosecutions seems likely to rise.

The pickets came three days after the latest armed searches and arrests of Crimean Tatars on October 11.  Six men, several of them activists from Crimea Solidarity, the initiative launched to help political prisoners and their families, were arrested on that day and are now facing fabricated ‘terrorism’ charges. Around 11 other men were detained and received large fines merely for having come out in solidarity and tried to video and photograph the searches and arrests.

Four other men had been arrested on October 2 on new charges for Russian-occupied Crimea, of supposed involvement in Tablighi Jamaat, a peaceful and apolitical movement which Russia has chosen to label ‘extremist’,

Even Russia’s repressive legislation does not require ‘authorization’ for single-person pickets, yet 49 people were detained, with the Russian-controlled police claiming that they had been taking part in ‘unauthorized pickets’.  Had there been anything remotely illegal, administrative protocols would have been drawn up immediately.  Instead the police demanded only ‘explanations’ from the detained picketers and held so-called prophylactic talks before releasing them.  This was all that the police reported, however activists say that they were forced to have their fingerprints taken, be photographed, and their placards were taken away.

The hunt for the so-called ‘organizers’ of the pickets began almost immediately, with a number of people summoned for questioning.

Then on November 24, lawyer Lilya Hemedzhi reports that at least three Crimean Tatars received protocols of administrative proceedings under Article 20.2 § 5  of Russia’s ‘code of administrative offences’.  Over 10 summonses had also been received.

Hemedzhy told Krym.Realii that people are still getting phone calls over the pickets on October 14.  Officers turn up at people’s homes, and simply leave protocols (illegally) drawn up in the people’s absence.  All of this, she says, is aimed at intimidating Crimean Tatar activists, at shutting them up so that there are no protests, no streaming of armed searches and arrests, no coverage of the human rights situation in Crimea.

The protocol which Usein Useinov received claims that by standing on the Armyansk to Simferopol road with a placard reading ‘Crimean Muslims are neither terrorists, nor extremists’ had “taken part in a public protest held by Crimean residents under the guise of single-person pickets”.

All of this, the Crimean Human Rights Group stresses, is in breach of Russian legislation and the European Convention on Human Rights. It is unlikely that this will worry the de facto court under Russian occupation, which has come up with even worse repression.

While hunting for the ‘organizer’ of the protests, the FSB were told by one man that the organizer had been his heart, and that others had doubtless been guided in the same way.

There was certainly inspiration for the placards, with this coming from Server Karametov, a frail 76-year-old Crimean Tatar, who on August held a placard reading ‘Putin, our children are not terrorists!” outside the High Court where the trial, in his enforced absence, was ending of political prisoner Akhtem Chiygoz.

He was standing quite peacefully, and not obstructing the way into the court, yet he was approached by police who demanded that he leave.  He began to protest, saying that his picket was legal, and was eventually manhandled and detained.  The ‘judge’ – Marina Vladimirovna Kolotsei – first fined him for supposedly breaching the procedure for holding public events, then jailed the elderly man with serious health problems, for ten days.

Several men, mostly of retirement age, came out a few days later with the same placard.  They were all detained, and one was fined 10 thousand roubles for his legal picket.

For the moment, Russia’s attempts to silence protest are so repressive and brutal that they are proving counter-effective.  This may well prove even more the case after the events on 23 November, where the FSB’s extraordinary attempt to arrest Vedzhie Kashka resulted in the death of this deeply respected and loved 83-year-old veteran of the Crimean Tatar national movement.   Russia turned immediately to scurrilous attempts to discredit Vedzhie Kashka herself, other respected Crimean Tatars, as well as the Crimean Tatar Mejlis, but did at least keep their distance during the funeral on November 24, attended by several thousand Crimean Tatars from all over Crimea.