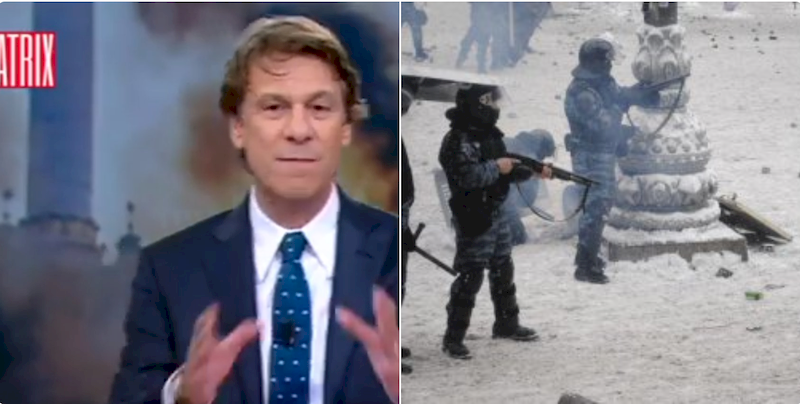 Both the BBC and StopFake have scrutinized the latest media allegations regarding the gunning down of Maidan activists and found them flawed and suspect.  The claimed link with former Georgian President and aspiring rival to Ukrainian President Petro Poroshenko goes back a long way, but could have been pulled out now so as to later use the recent unlawful expulsion of some  Saakashvili associates as supposed ‘proof’ that Ukraine’s leaders have something to hide.

Russia’s credibility in pushing such ‘sensations’ would be considerably enhanced if they stopped providing shelter, citizenship and, at least sometimes, employment in crushing peaceful protest, to ex-Berkut riot police officers whom Ukraine suspects of involvement in crimes against Maidan activists.  10 of the 23 former Berkut officers suspected of gunning down protesters in the last bloody days of Euromaidan have now received Russian citizenship, while a further two men have been given ’refugee’ status..

On the anniversary of the violent and bloody attempt by Berkut to disperse Maidan activists in the early morning of November 30, 2014, worth recalling that two main suspects believed to have coordinated those events – Serhiy Kusyuk and Petro Fedchuk – have both been spotted in Russia, working in the same capacity against Russian protesters.

There have been numerous attempts to blame the Maidan killings on Maidan activists themselves, on foreign powers, etc.  The latest is a supposed documentary by Italian filmmaker Gian Micalessin for Canale 5.  This presents interviews with three Georgians who claim to have come to Kyiv on Saakashvili’s orders, to have had training from a US sharpshooter, and to have acted as agents provocateurs and snipers, gunning down protesters in order to overthrow the regime of Viktor Yanukovych.

The BBC Monitoring Service has pointed to discrepancies in the alleged testimony which cast doubt on the story.  It notes that the Italian TV channel “also appeared to suggest that the film called into question the sanctions imposed on Russia over its intervention in Ukraine”.  The photo shown, allegedly of one of these supposed snipers, referred to as Alexander Revazishvili, enabled the BBC to carry out their own checks.  They found that the photo was from a report by the pro-Kremlin Life.ru TV channel from 1 December 2016 which also claimed that Georgian snipers had been responsible for the Maidan killings.  No names were given, and the photo identifies the man which the Italian film claimed was Revashishvili.  The difference in name might not be an issue, but the fact that it’s a different man is more than problematical.

Canale 5 is linked to Silvio Berlusconi, ex-Italian Prime Minister and friend of Russian President Vladimir Putin. Micalessin’s description of his film makes it quite clear why it would be music to the Kremlin leader’s ears: “Snipers confess and reveal a staggering truth. Behind the massacre of demonstrators were not the men of Russian President Yanukovych, but the leaders of the opposition supported by the European Union”.  The documentary itself adds the USA to the list of the main villains, with an American claimed to have been in charge of the supposed Georgian and Lithuanian snipers.

According to StopFake, Micalessin is a former member of the neo-fascist Fronte della Gioventù (MSI) and does not conceal his pro-Kremlin views.

The only really new element in his film are the interviews with the supposed Georgian snipers,  with the only one of these whose story allows for direct checking exposed by the BBC as fake.  The first claim of Georgian snipers on Maidan came back in early April 2014.

Russian and other sources, determined to blame Maidan activists for the carnage, have constantly referred to a phone call between Estonian Foreign Minister Urmas Paet and the EU High Representative for Foreign Policy Catherine Ashton.  As StopFake reported back in March 2014, Paet expressly rejected the claims made that his words were ‘proof’ that there had been snipers on both sides.  He had merely passed on one version recounted to him by Olha Bohomolets.

That version, as well as the latest claims in the Italian film, are invariably presented as proven fact on Russian media, including those Kremlin-funded websites for foreign consumption like RT and Sputnik.  Micalessin is knowingly involved in this, judging by the interview he gave Sputnik “Deadly Political Games: Italian Journalist Blows Lid Off Maidan Snipers Mystery”

The fact that Micalessin’s only real argument for believing the three Georgians is that their stories coincide with each other and with facts about the events that a simple Google check will uncover is only proof of his poor understanding of how to verify information.  The BBC Monitoring Service could advise him there – if he chose to listen.  This, however, seems in doubt.  He repeats a totally false version of the story about the Estonian Prime Minister.  Whether this is because he only uses Russian sources of ‘information’ about Maidan, or because he wants to mislead his audience is probably academic.  As a filmmaker, producing alleged documentaries, he has a responsibility to check the facts and he has clearly not done so.

Russian state-controlled media learned early on to quote ‘western’ sources for their stories.  Sometimes innocuous statements or pieces of information are deliberately distorted, sometimes the filmmakers themselves oblige.  This is what Micalessin has done, and he is not the first.  In 2016, French filmmaker Paul Moreira produced ‘Masks of the Revolution’ which followed Russian propaganda in calling the tragic fire in Odesa on 2 May 2014 ‘a massacre’, and presented an equally distorted picture both of Euromaidan and of Russia’s annexation of Crimea (see: French filmmaker adopts Putin’s ’Ukrainian fascist hordes’ line for Canal Plus