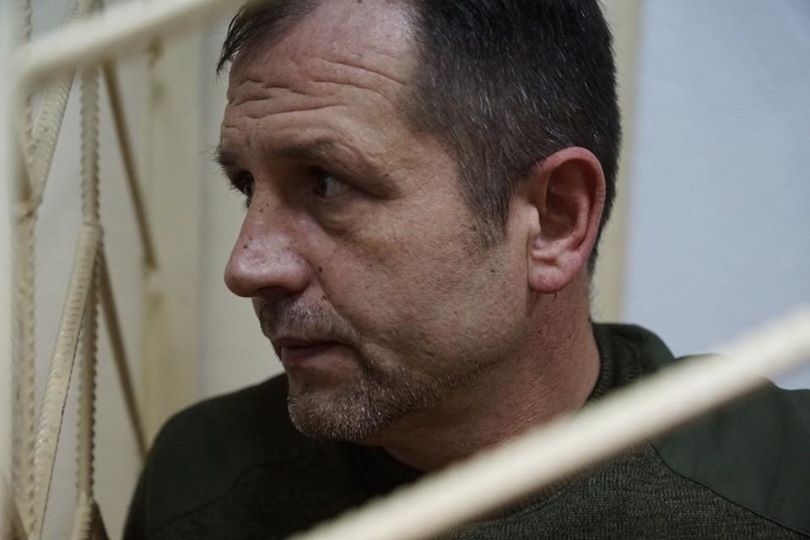 After being jailed in Russian-occupied Crimea  for almost a year on flagrantly falsified charges, Ukrainian activist and farmer Volodymyr Balukh has been placed under house arrest.  While Balukh’s elderly mother is, of course, overjoyed, Balukh himself called the ruling ‘insane’, since it prohibits him from leaving the house (or using the Internet).  “Can you imagine it?  My mother will be spreading manure, looking after the farm, while I sit at home.”   76-year-old Natalya Balukh is nearly blind, and had been forced to look after the farm alone since December 2016.

Hope of his release first came on November 29 when the Russian-controlled ‘Crimean High Court’ unexpectedly allowed the defence’s appeal against the latest extension of Balukh’s detention until 18.01.2018, and revoked that ruling.  The grounds were certainly compelling, with the defence demonstrating that the permissible period of detention for the charges Balukh is facing had expired. Arguments showing that the courts are in breach of even Russian legislation are standardly ignored, however, so it remained unclear until the court hearing on December 1 whether Balukh would be released.

The defence had asked for his release under a signed undertaking, however the ‘prosecutor’ demanded house arrest.

Balukh was blunt, calling the case “falsified and unlawful” and saying he didn’t understand why he was on trial when it is those – the judges and prosecutor – who unlawfully extended his detention, who deserve punishment. “I hope I will live to see them punished for their crimes”.

With the order from above having evidently changed, the same Razdolne District Court once again went along with the prosecutor, ordering that Balukh be placed under house arrest for the next two months.  He was released from custody in the courtroom.

Jailed for a Ukrainian flag

Balukh was arrested on Dec 8, 2016 after 90 bullets and several trotyl explosive devices were allegedly ‘found’ in his attic.  He had no record of violence and the constant searches and series of administrative prosecutions he had faced since Russia’s invasion of Crimea for his openly pro-Ukrainian position made it inconceivable that he could have held anything illegal in his home.  This was one of the grounds for the Memorial Human Rights Centre’s decision to declare the 46-year-old a political prisoner well before the trial.

The level of falsification in this prosecution was quite astounding.  The officer who had supposedly found the ammunition had not been on duty that day and could not name the individuals who had instructed him to be present or their position in the law enforcement bodies. He also had no explanation for why he had also climbed onto the roof and removed the Ukrainian flag flying there.

The ‘judge’ Maria Bedritskaya had ignored all of this and simply accelerated the final verdict in order to go on holiday, sentencing him on August 4 to 3 years and 7 months’ imprisonment and a 10 thousand rouble fine.

The defence had warned Bedritskaya from the outset that even Russian legislation envisages criminal liability for imprisoning people on the basis of overtly rigged evidence.  The day when she is held accountable is yet to come, but the falsifications were so gross that the High Court on October 2 quashed the first court’s sentence and sent the ‘case’ back for retrial under a new judge.

During his final address on August 1, Balukh had pointed out that there was in fact no criminal case, only a farce acted out by those instructed to play it to the end.

“What is happening with me is a vivid example of how the state machine works”, he said. – “Nothing is sacred, no legal arguments, nothing has any effect on it, and it’s all according to the will of one or several people.  This is the first reason why I’m here. The second reason is my love for my Homeland, for everything that I am made of, my nationality, my memory of my forebears, all of them whom I know. They were Ukrainians, worthy people preserving their traditions. That was how we were raised by our mother and father. My Homeland is for me the same as my mother, my family, my children”.

Well, I don’t want life on earth to end, I don’t want my descendants, by that I mean the children of all Ukraine to one day reproach me for having been cowardly, shown weakness. Yes, there were objective reasons, nobody wants to go through what I’m experiencing now.  You can understand any person, but I have nonetheless lived the best years of my life, and at my age I can’t afford to show cowardice. Therefore what will happen, will happen.”

The speech can be heard in full here https://youtube.com/watch?v=NdF-4aWlTW0