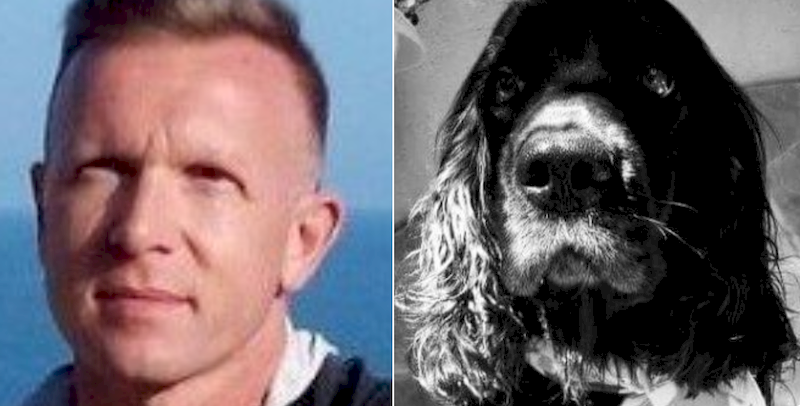 Oleksandr Kovalchuk, a Ukrainian citizen, has been forcibly deported from Crimea where he had been living since 2011.  Russia, which is illegally occupying Crimea, accused Kovalchuk of breaching Russia’s migration legislation – and his dog Teddy of ‘sabotage’.

Kovalchuk recounts that on November 17, FSB officers arrived at his home in Yalta.  They used falsified data about people entering and leaving Crimea to claim that Kovalchuk had infringed Russian migration law.  They said that Kovalchuk had only arrived in Crimea from mainland Ukraine in 2016 and that he was ‘in hiding’.  In fact, Kovalchuk says, he had come to Yalta in 2011 on advice from doctors, due to a chronic illness, and had not left Crimea since then.

He was taken to court, where his lawyer was told he would be arrested, placed in a special holding facility for ‘migrants’ and forcibly deported.  This would seem to have been to get him to agree to ‘admit to infringing Russian migration legislation’, pay a fine of 2 thousand roubles and leave himself within 15 days.  Kovalchuk says he was told verbally that he would be banned from Crimea under Russian occupation and Russia for five years.

It could have been worse, since the FSB originally wanted to accuse him – and Teddy – of terrorism.  It seems that they went around to his neighbours, showing them a photo of the dog and explaining that he had been spotted at the scene of an allegedly planned act of sabotage to electricity pylons in Yalta.  It seems Kovalchuk’s cat had managed to avoid being detected.

Kovalchuk explains that after Russia’s annexation, he had tried, without success, to receive documents in accordance with the Russian legislation illegally imposed in Crimea.

Alexander Sedov from the Crimean Human Rights Groups calls this ban on a Ukrainian citizen living on Ukrainian territory part of Russia’s deliberate policy of changing the population in occupied Crimea.  Kovalchuk has been driven from Crimea for not having Russian citizenship.  All of this is in grave violation of Article 49 of the Fourth Geneva Convention regarding civilians on occupied territory;  the European Convention on Human Rights; and the Hague Convention prohibiting force applied on the population of occupied territory to swear allegiance to the occupier.

Russia’s denial that it is occupying Crimea is rejected by the UN and international community. The Chief Prosecutor of the International Criminal Court issued a preliminary report on Nov 16, 2016, which found that the situation with Crimea constitutes an international armed conflict between Ukraine and the Russian Federation.

After invading Crimea and faking a ‘referendum’ on ‘joining’ Russia, Moscow is applying strictly selective Russification in its persecution of Ukrainians.  While it has banned or even deported some Crimean Tatars from their homeland as Ukrainian citizens, it is falsely claiming that Ukrainian filmmaker Oleg Sentsov and civic activist Oleksandr Kolchenko, whom it is illegally imprisoning, automatically’ become Russian citizens.

As well as driving many Ukrainian citizens from Crimea through open or implicit threat of persecution, Russia is also following Soviet practice by bring large numbers of Russian citizens to Crimea.  Mustafa Dzhemilev, veteran Crimean Tatar leader and Ukrainian MP, recently estimated that as many as 550 thousand Russians and people from Donbas with pro-Russian views, including a militant facing a life sentence for his torture and murder of 16-year-old schoolboy Stepan Chubenko, have been moved to the occupied territory.