Death of Ukraine’s most famous torture victim to be reinvestigatedTortured & Almost Certainly Innocent Ukrainian Life Prisoner Dies Without JusticeForced to hunger strike in search of justice for their sonsUkraine’s MPs block last chance of justice for tortured Ukrainian prisonersJudicial Review demanded for Life Prisoners Tortured into ‘Confessing’ to AnythingWhy are Ukrainian legislators willing to see innocent men serve life sentences?In Ukraine a life sentence is for life even when you’re innocentLast chance of justice for Ukrainian serving life sentence for self-defenceUkraine’s penitentiary institutions and the warZelensky urged to veto law that puts Ukraine on track for more damning European Court judgments Former HR Ombudsman Lyudmyla Denisova on her dismissal, 4 years of work, Ukrainians in occupied areasUkraine hammered by Court in Strasbourg for endless torture of life prisoners Vital chance for justice after Ukrainian Constitutional Court ruling Zelensky fails crucial test for restoring justice in Ukraine A brief description of the KHPG strategic litigations in the first half of 2021Prisoners’ rights to health protection and medical care in 2014-2021: KHPG reportPosthumous justice for Ukraine’s most famous victim of police tortureUkraine’s most malicious miscarriages of justiceA brief description of the KHPG strategic litigations in July–December 2020Is COVID-19 present in penitentiaries and pre-trial detention centers?
• Topics / The right to a fair trial 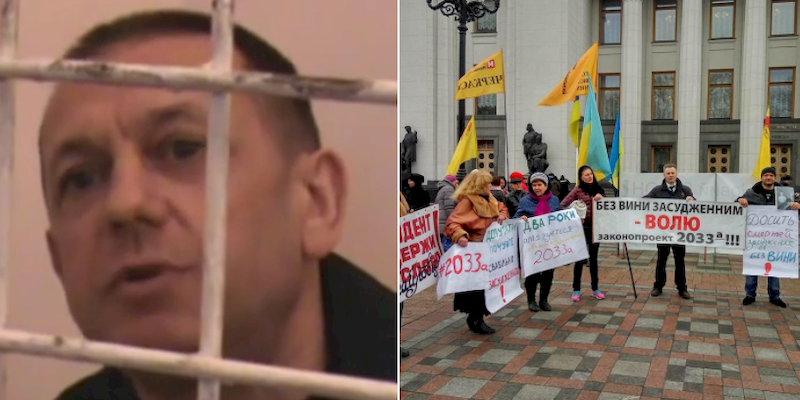 It is four years since Maidan’s Revolution of Dignity, and two since a draft bill first gave hope to Ukraine’s victims of grave miscarriages of justice and their families.  Hope remains, but also frustration, since Draft Law No. 2033a continues to gather dust, despite a Council of Europe positive assessment and the fact that yet another man, who was almost certainly innocent, has died in prison, betrayed to the end by Ukraine’s justice system – and its politicians.  While the Justice Ministry has now given support to the bill, there appears to be strong resistance from the Prosecutor General’s Office.  A current Constitutional Court judge is implicated in one questionable life sentence, while the judge who passed another such sentence was recently appointed to the Supreme Court.

No. 2033a does not propose anything radical.  It offers only those serving life or very long sentences a chance of judicial review where there are specific grounds for this.  Such a review could be sought if the only evidence against the person was from confessions or other testimony obtained through illegal means, for example, torture, or if the witness gained some benefit from testifying against the defendant.  It would also be possible if there were grounds for believing that the evidence had been falsified and / or where the court had rejected evidence proving the defendant’s innocence.  A further reason would be if the sentence did not seem proportionate to the case.  The law is needed since many of the men have been in prison for years despite sentences that aroused doubts from the outset.

At a press conference on the bill on December 1, Oleksandr Banchuk from the Centre for Political and Legal Reform noted that the so-called ‘Savchenko Law’ and its fate are now impeding the adoption of draft bill No. 2033a, although the two laws and their likely application were radically different.

The first legislative initiative, No. 3413, put forward by Nadiya Savchenko in 2015, while still in politically-motivated imprisonment in Russia, established that one day in SIZO [pre-trial detention centre] counted as two days served in a prison colony.  The justification given was that the conditions in SIZO are significantly worse than in a prison colony, with people who have not been convicted of any crime being held in overcrowded cells, without poor and insufficient food, etc.

The theory was that this would also reduce the time that people were held in SIZO, since if the prosecution really was convinced that the person had committed a crime, they would want the trial to take place as soon as possible. Even after the new Criminal Procedure Code was introduced in 2012, the period people are held in remand remains much longer than in most European countries.

Although there are conflicting views about the Savchenko Law, there were cases where people who had committed serious crimes were released much sooner than their sentences demanded merely because of the time that they had spent in SIZO.  The law was finally revoked in May 2017.

Banchuk says that the negative press received by the Savchenko Law is now impacting upon MPs’ willingness to adopt No. 2033a.  While this may be a contributing factor, the Prosecutor General’s Office has also been suggested as a likely source of pressure on politicians.  Human rights activist Andriy Didenko, for example, notes that Yury Lutsenko in his former role as head of the Bloc of Petro Poroshenko supported No. 2033a, however the situation changed after he became Prosecutor General.  This is explained, he says, by the fact that in all of the questionable cases where people have been sentenced to life imprisonment, it was the prosecutor’s office who was in charge of the investigation and who was also supposed to have ensured that everything was in compliance with the law.  Judicial reviews will therefore raise serious questions about their role in each case.  Responsibility does not only lie with the police and prosecutor, since people could not have ended up imprisoned on the basis of highly questionable evidence without judges also being implicated.  In short, any acquittal must inevitably raise questions about the individuals who helped bring about a miscarriage of justice.

It might also elicit concern about the high-ranking posts those implicated hold.  One such case has already cast a shadow over the recent competition for judges to the Supreme Court.  Despite a negative assessment from the Public Integrity Council, based specifically on the life sentence he passed on Volodymyr Panasenko, Stanislav Holubytsky was appointed to this highest court of the land.

Panasenko is just one of many life prisoners whose cases urgently need review, but it has been identified by human rights activists as being of quite unprecedented cynicism and falsification. His lawyer Natalya Krisman says that nobody, neither the investigators, nor the court, really even bothered to pretend that they believed in his guilt, it was just that all the others had power and influence (details here).

Procrastination in passing 2033a, and attempts to claim it will be abused are particularly inexcusable given the entirely clear assessment provided by the Council of Europe’s Directorate General on Human Rights and Rule of Law in February 2017.  While the legal experts (Jeremy McBride and Eric Svanidze) did make critical comments and suggest amendments, some of these were in fact towards broadening the scope of the law.  They stated quite unambiguously that the aim of the amendments proposed, namely “an extraordinary review framework for addressing certain systemic and other serious deficiencies previously ingrained into Ukraine’s criminal justice system” was compatible with European standards.

They specifically note that “the cases are ones involving widespread abuses that have been reported by human rights defenders and activists and illustrated by findings of violations of the right to fair trial in a number of the judgments by the European Court concerning Ukraine.”

If the concerns raised about these cases are well-founded, the experts add, they would indicate that the convicted individuals’ right to a fair trial had been violated, “having been obtained in a manner that either violated the right to remain silent and the prohibitions on self-incrimination8 and the use of torture”.

Ukrainians did not come out on Maidan four years ago and did not vote for a pro-European, pro-reform government in order to have MPs stall on vital reform under pressure from law enforcement bodies not wanting uncomfortable questions being asked.  Ukraine’s leaders have rightly condemned Russia’s politically motivated persecution of Ukrainians in occupied Crimea and Russia.  They have every opportunity to ensure that Ukrainians imprisoned on flawed charges in Ukraine finally get the long-awaited review and no excuse for allowing miscarriages of justice to continue through their procrastination.

Please help by asking politicians in your country to raise the subject of Law No. 2033a with Ukrainian MPs and / or by writing to Andriy Parubiy, Speaker of the Verkhovna Rada at Parubii.Andrii[at]rada.gov.ua  Please also use the Facebook pages of MPs to ask them to support No. 2033a, or to explain why, especially in the light of the Council of Europe assessment, they are failing to do so.