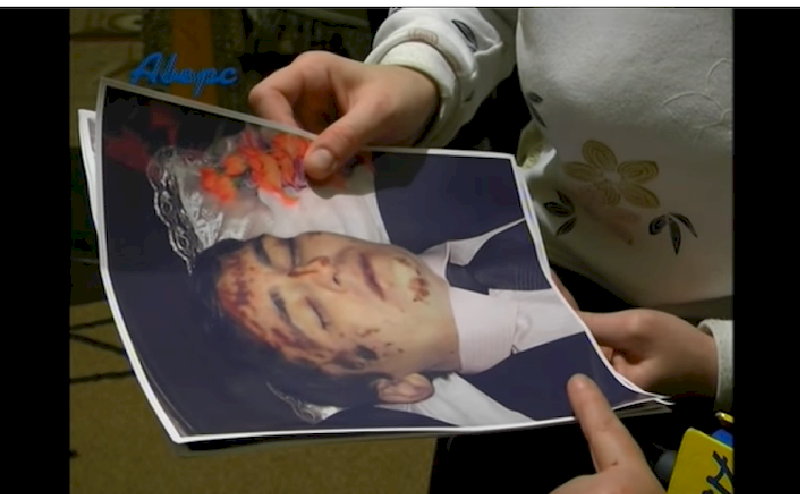 The family of 25-year-old Dmytro Lystovnychy have disputed the claim that his death in SIZO [remand prison] was of ‘natural causes’, and have shown harrowing photos suggesting that the young man had been severely beaten.

Dmytro had committed the offence he was charged with – he had stolen a bottle of whisky while drunk.  His mother tried to pay the money, but the supermarket still reported it to the police “to teach him a lesson”.

He assured his mother that all would be fine and that he’d never break the law again, after serving the 6-month sentence imposed.

He died back on October 22, his fourth day in the SIZO.

His mother was told only that he he had died of natural causes, supposedly from cirrhosis of the liver.  The photos that she shows, however, of her son’s bloodied body show injuries to his face, arms and legs.

The Penitentiary Service and doctors are continuing to claim that he died from ‘acute hepatitis’.  The Penitentiary Service has, however, said that Lystovnychy was registered as an alcoholic.  They assert that he was placed in solitary confinement “for inadequate behaviour” and are now suggesting that he could have committed suicide.

The prosecutor’s office is responsible for carrying out oversight in all such cases, yet it appears to have only initiated criminal proceedings because Dmytro’s mother has made a formal complaint.   It has now now launched a murder investigation, as well as a probe into suspected negligence from the doctors and falsification of medical documents.

It is disturbing that no investigation would have been carried out into the death of this 25-year-old Lutsk man had his family not objected to the natural causes verdict and contacted the media.  A new forensic examination is now planned.

It is not only such cover-ups that Ukraine’s Penitentiary Service are not managing to (or not trying to) eradicate.  There was nationwide publicity recently to both the murder of a female SIZO employee in Odesa and the subsequent mass beating of remand prisoners.

Details were revealed by Dmytro Krasnobaev, a priest from the Ukrainian Orthodox Church under the Kyiv Patriarchate.  What can you call this, he asked, when prisoners are beaten up, their belongings destroyed?  The first thing that comes to mind, he continued, was  “the collective punishment in a Nazi concentration camp”.

Valeria Lutkovska, Ukraine’s Human Rights Ombudsperson, became involved, and in September the Prosecutor General Yury Lutsenko announced that the acting head of the Southern branch of the Penitentiary Service had been informed that he was under suspicion over the ill-treatment of prisoners.   Lutsenko did not name the man, although the media had no difficulty in identifying him as Anatoly Kovtun.

Once again, the prosecutor’s reaction was directly linked with attention given the acts of intimidation by the media and human rights organizations, and it remains to be seen whether anything comes of the criminal investigation.