Ukraine launches spiral of illegality with abduction & expulsion of Georgians linked to Mikheil SaakashviliUkraine may answer to the Court in Strasbourg for abduction-like deportation of three GeorgiansSerious concern about motives as Ukraine detains brother of Mikheil SaakashviliPoroshenko strips political opponent Mikheil Saakashvili of his Ukrainian citizenshipIs President Poroshenko turning to selective stripping of Ukrainian citizenship?Poroshenko law could strip huge numbers of Ukrainians of their citizenshipUkrainian citizens are now a group at risk in Russian-occupied CrimeaRussia backtracks over Ukrainian citizenship in CrimeaRussian, or else: On how Russia is foisting its citizenship in CrimeaCrimean Tatars and others face citizenship dilemmaRussian methods: Calls for Crimea’s return to Ukraine could get you imprisonedMGIMO historian fired for article comparing Crimean annexation to Hitler’s AnschlussInformation channels at warDonetsk Front in Putin’s Dirty WarScurrilous rumours used to spread fear and distrust in Eastern oblastsAutoMaidan activist shot at near ChongarRussian troops already deployed in mainland UkraineThe Crimea is our Home: Get your troops out!Crimean "referendum" a grotesque farceCrimean Tatars call on all Crimeans to boycott "referendum"
• Topics / Politics and human rights 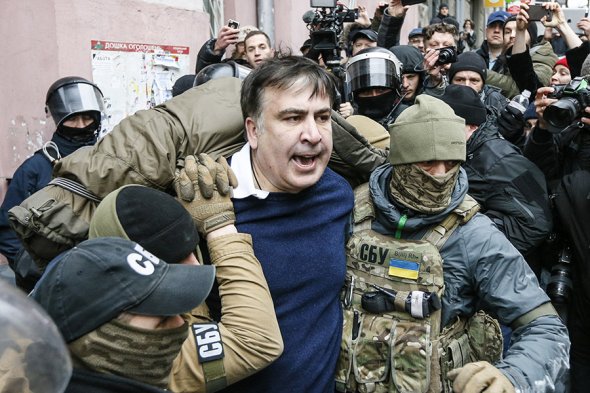 Ukraine’s Prosecutor General cane up with apparently serious allegations on December 5, as well as some intercepted telephone conversations, to back the aborted attempt to detain Mikheil Saakashvili which made headlines throughout the world.  While Saakashvili remains at liberty, his close associate Severion Dangadze has been remanded in custody, without bail, for two months, with this only fuelling concerns expressed by legal specialists about the legal substance to the accusations.

The tapes revealed, if genuine, would raise serious moral issues since they suggest that both the former Georgian President, Odesa Oblast Governor and aspiring rival to President Petro Poroshenko and Dangadze are willing to take money for their street protests from Serhiy Kurchenko, The latter made his millions through his close association with the regime of Viktor Yanukovych and is assumed to also be in hiding in Russia.

There must obviously be a proper check carried out as to whether the tapes are authentic, since Saakashvili himself denies this.

While the tapes, if real, would cast a shadow over the Georgian politician and his attempts to arouse a new Maidan in Ukraine, they would not remove the shadow that these latest events have placed over the Prosecutor General Yury Lutsenko and, probably, President Poroshenko.

Legal experts have pointed to glaring flaws in Lutsenko’s claim that Saakashvili is guilty of an attempt, by prior conspiracy, to finance actions aimed at a violent change or overthrowing of the constitutional order, or seizure of power.

Mykola Khavronyuk, Professor of Law at the Kyiv-Mohyla Academy and expert for the Centre for Political and Legal Reform, considers the legal qualification of Saakashvili’s alleged actions contentious.  While the tapes would indicate conspiracy, they don’t muster up to an attempt to overthrow the government.  In part of the tape, for example, the plan is discussed to have the crowd carry Saakashvili on their shoulders into the Verkhovna Rada.  This may be disruptive, but it’s hardly an attempt to violently overthrow the present government.

“What is actually in question is the financing of street protests in order to stir up greater protest”, Khavronyuk says, pointing out drily that there is no such article in the Criminal Code.”

Hanna Malyar is, like Mykola Khavronyuk, an expert in criminal law.  In an article asking whether the (alleged) ‘Saakashvili tapes’ contain evidence of a crime, she analyses the information thus far presented.

During a press briefing on Dec 5, Lutsenko asserted that “Saakashvili and his associates financed protests that he had initiated, aimed at seizing state power in Ukraine and helping members of a Yanukovych-Kurchenko organized criminal group”.

Even if the divulgence of information about investigative activities was required by the social importance of a case, all parties must still adhere to the presumption of innocence until a person has faced trial.  That is the principle, anyway, one which Lutsenko is ignoring, as have all his predecessors and far too many other public officials.

There is another serious problem however, and that lies in Lutsenko’s blithe references to a “Yanukovych-Kurchenko criminal group”. It is this alleged formation that Saakashvili is accused of having helped, and it is presumably the justification used for remanding Dangadze in custody and accusing him of “helping participants of criminal organizations and the concealment of their criminal activities’ (Article 256).

Malyar points out the Criminal Code is quite specific about what a criminal organization is, including the requirement that it contains at least three participants.  Lutsenko’s recent controversial divulgence of names of people acting as secret detectives for Ukraine’s National Anti-Corruption Bureau [NABU] makes it clear that he does not worry overly about revealing sensitive information.  Here, however, only two members are mentioned.

It was the lack of political will among Ukraine’s leaders, Malyar asserts, that prevented Yanukovych’s regime being declared criminal, with ensuing prosecution on criminal charges.  Instead they made do with imitating so-called ‘lustration’.

If Lutsenko has come up with hard proof of a criminal organization, involving Yanukovych, this is sensational stuff which he should be reporting.

Both Malyar and Khavronyuk clearly see nothing to suggest any such proof with this being of major concern since the two criminal law experts also see no elements of a prosecutable crime on the tapes.

Malyar notes, for example, that the tape begins with the words that the Prosecutor General’s Office monitors people who help Kurchenko and others in the alleged Yanukovych criminal organization “in their attempts to establish control over political processes in Ukraine”.

This may be reprehensible and, given the individuals mentioned, certainly undesirable behaviour, but it is not a crime.

The next slide claims that the Prosecutor General’s Office has proof of two ‘offences’ – financing mass protests and a conspiracy to seize state power in Ukraine.

Again, there is nothing in Ukrainian legislation to prohibit financial assistance to participants in peaceful gatherings.  Like Khavronyuk, Malyar heard nothing on the tapes to prove any conspiracy to carry out a coup d’état.

She says, on the contrary, that the person alleged to be Dangadze assures the other person that it would be quite safe to seize parliament.  It is also clear, however, that Saakashvili knows nothing about any such plan and Dangadze suggests to the person allegedly carrying out tasks for Kurchenko, that they find somebody else for the role.

To call something a conspiracy to seize power, you need to show the will of several people to work together, coordinating individual actions. The only ‘joint action’ coordinated by any participants is the handing over of money (which is not a crime) and the tapes actually demonstrate the lack of an action plan to seize power.  A conspiracy to seize power would also need to have agreed on actions which had a real chance of achieving such an aim.  Even if the protesters did manage to burst into the Verkhovna Rada, this alone is very far removed from seizing control.  Thus, not only is there no proof of a conspiracy, but even if there was, it would only be a plan to seize the Verkhovna Rada premises, an administrative building.

The question, supposedly from the Kurchenko go-between about whether it would be possible if they came to power to terminate all criminal proceedings involving bodies linked to Kurchenko does not elicit any promises or assurances from the person alleged to be Dangadze.  The same applies to the supposed intercepted call between Saakashvili and Kurchenko. Conditions may have been articulated, but in Malyar’s view, there is nothing in the alleged Saakashvili response to indicate agreement either to cooperate or to suggest that they are already cooperating.   She suggests that the responses from the person alleged to be Saakashvili could provide a textbook example of how to reply so that no court could establish the essence of what was said.

The money allegedly agreed for the ‘border’ operation (when Saakashvili’s supporters helped him force his way back into Ukraine) could only constitute incriminating evidence if it can be proven that it was used, for example, to bribe border guards.  Paying for meals, tickets, etc. is, quite simply, no crime.

Both legal experts leave the possibility open that Lutsenko does have proof that he’s not mentioning.  There can be legitimate grounds for keeping information secret, but both Lutsenko and Poroshenko have only themselves to blame for the deep public scepticism and concern both in Ukraine and abroad.

Poroshenko’s action in stripping Saakashvili of his Ukrainian citizenship in July 2017 left the latter a stateless person which alone makes it in breach of Ukraine’s Constitution and other legislation.  There are other reasons for doubting the legality of the action, and the claim that Poroshenko had merely taken the advice of the relevant committee needs to be viewed in light of the fact that he had changed the makeup of that committee just days before they gave their ‘recommendation’.

The effective abduction and expulsion of four Georgian nationals on October 21, and a further three on November 17 are also of immense concern and are likely to result in Ukraine being found in violation of the European Convention by the European Court of Human Rights.  If Lutsenko does not have more than morally, but not legally, incriminating tapes to warrant the attempted arrest of Mikheil Saakashvili and the detention of Severion Dangadze, this case may also be headed for Strasbourg.