New law proposing to give politicians control over anti-corruption agencies withdrawn after protest? 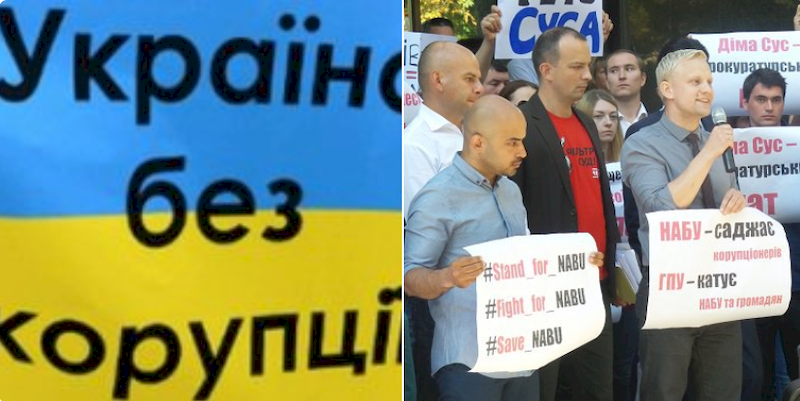 A bill just tabled in Ukraine’s Verkhovna Rada would allow parliament to dismiss the heads of independent anti-corruption agencies, whose scope includes investigating corruption by those same politicians.  MP Mustafa Nayem reported at around 4 a.m. on Thursday morning that the bill had been withdrawn from the agenda.  If the danger has been averted, this demonstrates that international outrage can still have an impact.  Concern remains both that the attempt to bring the agencies under control was made at all, and that the bill could be reintroduced.

This ‘legislative initiative’ came a week after the disruption of an undercover investigation by the National Anti-Corruption Bureau of Ukraine (NABU) led to accusations from the Prosecutor General’s Office and counter-accusations from Artem Sytnyk, head of NABU.  Both the USA and EU have expressed their concern over the events which Heather Nauert from the US State Department said “appear to be part of an effort to undermine independent anticorruption institutions that the United States and others have helped support. They undermine public trust and risk eroding international support for Ukraine."

Rather than noticing the alarm and backing off, Ukraine’s leaders appeared to be bulldozing ahead, with this seriously risking western support.

On Wednesday evening, Michael Carpenter, a US defence expert tweeted that “If the Rada votes to dismiss the head of the Anticorruption Committee and the head of the NABU, I will recommend cutting all US government assistance to Ukraine, including security assistance. This is a disgrace.”

His reaction is likely to be echoed by all Ukraine’s erstwhile partners.

Draft bill No. 7362 was registered in parliament by Artur Herasimov, head of the Bloc of Petro Poroshenko faction in the Rada and by Maxim Burbak from the People’s Front.

The bill would allow the Verkhovna Rada to hold a vote of no confidence in the Director of the State Bureau of Investigations; the Head of the Specialized Anti-Corruption Prosecutor’s Office; the Director of the National Anti-Corruption Bureau of Ukraine; and a member of the National Agency on Preventing Corruption.  If such a vote of no confidence was adopted, it would result in the official’s dismissal.

A vote of no confidence could be proposed by the President; the Cabinet of Ministers or by a third of the constitutional makeup of the Verkhovna Rada.

The explanatory note has a long introduction about the Verkhovna Rada representing the people, etc., and then makes the following assertion:

“in cases of flagrant violation of the law, extremely ineffective and incompetent activities of agencies called upon to safeguard law and order in Ukraine, and specialized anti-corruption agencies which can lead to the non-observance of human rights and liberties, it seems expedient to establish the right of the Verkhovna Rada as representative body of the entire Ukrainian people to consider the issue of expressing no confidence in the management of the above-mentioned agencies”,

It is very much to be hoped that this view on ‘expediency’ is not shared by the majority of parliamentarians, since it runs counter to the philosophy behind such anti-corruption agencies.  Such an option would make a nonsense of fighting corruption since the heads of the relevant agencies would have to worry that they didn’t tread on politicians’ toes. This would put Ukraine on collision course with the EU just four years after Ukrainians paid a very heavy price for their commitment to democratic values and closer ties with Europe during the Revolution of Dignity.

The selection of the current Director of NABU was a long, but truly competitive, process, with the President finally given a choice of three candidates selected by prominent public figures, human rights and civic activists.  At present, the Director can resign if unable or unwilling to continue, or if appointed to another position. S/he can be removed for not providing declarations in timely manner; if s/he has become a citizen of another country; or on the basis of an assessment of an independent auditor regarding the inefficient work of the NABU or that the Director has not carried out his or her duties as required.