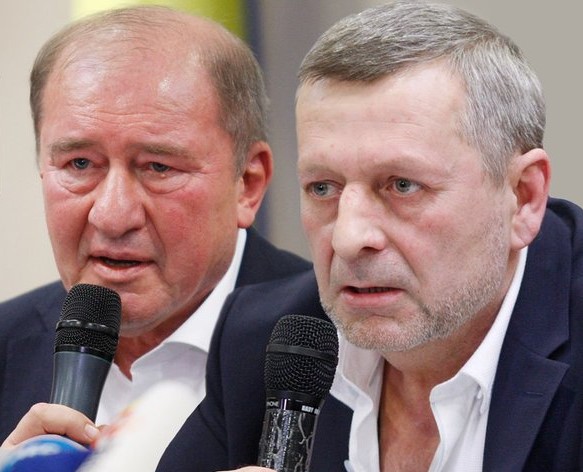 Reports in the media that Russia freed Crimean Tatar political prisoners Akhtem Chiygoz and Ilmi Umerov in exchange for two Russians accused of at least one political killing in Turkey cannot be confirmed or denied, however the Kremlin clearly has something to hide.

Chiygoz’ lawyer Nikolai Polozov reports that neither Chiygoz nor Umerov were provided with any documents explaining their move before being put on a plane and taken to Ankara in Turkey.  Both are therefore, legally speaking, still in Crimea.

Chiygoz received just one slip of paper confirming his release.  Since that refers to a presidential decree, both Polozov and his colleague Edem Semedlyaev sent lawyers’ requests for information about the relevant decree (or decrees) to President Vladimir Putin’s Administration.  Both received letters refusing to provide the information, with the excuse that it was on restricted access.

Both Chiygoz and Umerov will be lodging appeals demanding access to these  normative acts which directly affect their rights.  Polozov says that he will represent both men during the hearing in a Moscow court.

So what is Russia hiding?

The reason for the secrecy was probably revealed by the Turkish newspaper Haberturk.com  This asserts that the two highly-respected Crimean Tatar leaders had been exchanged for two Russians – Alexander Smirnov and Yury Anisimov – who were facing charges in Turkey of spying and a political killing.

Haberturk explains that the men were extradited to Russia after the prosecutor suddenly asked the court to release them.  The prosecutor quoted a decree issued in August according to which foreign nationals imprisoned in Turkey can be released or exchanged at the application of the justice ministry, head of police or President if this is needed “for national security and the interests of the state”.

Smirnov and Anisimov were arrested by the Turkish authorities in April this year and accused of involvement in the killing of Abdulvakhid Edelgireyev, whom Shaun Walker from the Guardian called “a key figure in the Caucasus Emirate, the umbrella group of Chechen and other fighters in Russia’s North Caucasus that has resorted to terrorist methods”.

Walker called his killing in November 2016 “the latest in a pattern of audacious hits on key Chechen figures in the Turkish city over recent years”  He noted that although personal enemies of Putin-supported Chechen leader Ramzan Kadyrov had been killed, the Turkish prosecutors believed that the killings were more likely to be “more centralised Russian hits”.

The indictment accused the two men of being part of a unit responsible for the killing of seven Chechens between 2000 and 2015.

Putin issued a decree in 2003 allowing the FSB to be deployed in ‘operations’ abroad.  One such ‘operation’ was the killing in 2006 of Alexander Litvinenko with the use of radioactive polonium in the centre of London.  Putin has since given a state honour to Alexei Lugovoy, the main suspect, hiding from British justice as a Russian MP (‘elected’ after the murder).

There is no hard evidence that the Kremlin agreed to an exchange to get men involved in state-sponsored killings back, but the coincidence would be great.

Neither Chiygoz nor Umerov were provided with any information about this, and both men had clearly rejected any compromise or request to Putin for a so-called ‘pardon’.

Akhtem Chiygoz was sentenced to eight years’ imprisonment on September 12, after having been held in appalling conditions in the Simferopol SIZO [remand prison] since January 29, 2015.  He was not allowed to attend his own trial, and was also prevented from attending his own mother’s funeral, having been taken to see her before her death for a mere ten minutes.

The charges were of pure legal nihilism, since they pertained to a demonstration that took place on February 26, 2014, on Ukrainian territory and under Ukrainian law.  Even had Russia had jurisdiction, there would have still been absolutely no grounds to the charge of ‘organizing a mass riot’, since there had been no mass riot, and Chiygoz was not in charge anyway.

This so-called ’26 February’ case was openly anti-Crimean Tatar and seemed a clear act of revenge against the Mejlis which blocked Russia’s attempt to carry off a coup without the use of Russian forces.  (Details here and  here. )

Ilmi Umerov was convicted of so-called ‘public calls to violate Russia’s territorial integrity’ over an interview he gave in Crimean Tatar in March 2016.  He was accused of having said that Russia must be made to leave Crimea and Donbas.

There would have been no such public calls even if he had said this, but he did not, and the indictment was grossly falsified.  He stated the following, with respect to international sanctions:

No ‘public calls’ and the same position on Crimea as that presented by the UN, OSCE, EU and all democratic nations (more details here).