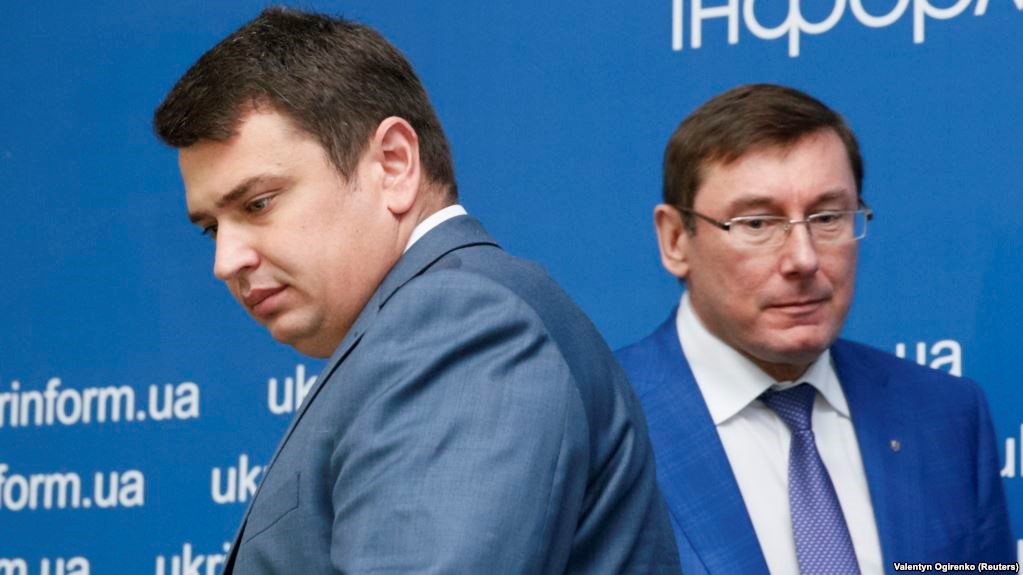 Ukrainian activists and reformist lawmakers worked tirelessly overnight to remove a bill from parliamentary consideration that they say would "destroy"the country’s only independent investigative body by dismissing its chief.

By the morning of December 7, after hours of frantic calls to Western allies for support, they had won a small victory in a battle that looks set to continue: The legislation was not on the Verkhovna Rada’s agenda for that day.

The highly controversial bill, which would see Artem Sytnyk removed as the head of the National Anticorruption Bureau (NABU) of Ukraine, was authored by lawmakers from the parties of President Petro Poroshenko and former Prime Minister Arseniy Yatsenyuk.

Critics, including former officials who have quit the government in frustration or been dismissed, have accused Poroshenko of blocking reform efforts.

Activists and lawmakers said the bill had seemed certain to pass until Ukraine’s Western backers, concerned by recent backsliding on reform efforts, stepped in.

The International Monetary Fund (IMF) and World Bank both said late on December 6 that they were worried about attacks on Ukrainian anticorruption institutions.

"We are deeply concerned by recent events in Ukraine that could roll back progress that has been made in setting up independent institutions to tackle high-level corruption," IMF chief Christine Lagarde said in a statement on December 6.

The World Bank’s office in Ukraine expressed its concern in a separate statement, saying attacks on anticorruption bodies "threaten their ability to fight corruption and recover stolen assets."

The two institutions are among financial contributors that have provided a $40 billion bailout package to help Ukraine reform its economy after the Euromaidan protests pushed Moscow-friendly President Viktor Yanukovych from power in February 2014.

But billions of dollars in IMF loans have been delayed due to what is seen as backtracking on reform commitments, even as Kyiv -- amid an ongoing war with Russia-backed separatists in eastern Ukraine -- has sought closer integration with the EU and increased foreign investment.

The IMF and World Bank concerns echoed those aired by U.S. and European Union officials who have warned Ukraine this week against moves that would hinder its fight against entrenched corruption, something Western governments say is crucial to Kyiv’s efforts to resist Russian efforts to destabilize the country.

"It serves no purpose for Ukraine to fight for its body in Donbas if it loses its soul to corruption," U.S. Secretary of State Rex Tillerson was quoted as saying in astatement on December 4, referring to the conflict with the Russia-backed separatists who hold parts of two eastern provinces. "Anticorruption institutions must be supported, resourced, and defended."

The State Department said on December 4 that concerns about Ukraine’s commitment to fight corruption were raised by actions that "appear to be part of an effort to undermine independent anticorruption institutions," adding that such moves “undermine public trust and risk eroding international support for Ukraine."

Activists and lawmakers who oppose the bill credited each other’s efforts and a fast-moving, viral social-media campaign for getting it removed from the parliamentary agenda. They mobilized online using the hashtags #savenabu, #supportnabu, and #standfornabu.

They suffered a setback later on December 7, however, when the Verkhovna Rada voted separately to dismiss the head of its Anticorruption Committee, Yehor Sobolyev.

Among those who took notice of the bill was Michael Carpenter, senior director at the U.S.-based Penn Biden Center for Diplomacy and Global Engagement.

"If the Rada votes to dismiss the head of the Anticorruption Committee and the head of the NABU, I will recommend cutting all US government assistance to #Ukraine, including security assistance. This is a disgrace," he tweeted.

The Canadian ambassador to Kyiv, Roman Waschuk, wrote on Twitter that if the bill passed there would be consequences in terms of international economic support.

Vitaly Sych, editor in chief of Novaya Vremya, a top Ukrainian news magazine, said that "never over the last three years have the Ukrainian authorities fought anticorruption efforts so openly as today."

The creation of NABU has been hailed as one of the crowning achievements of the Euromaidan movement. NABU’s supporters say its demise would mean the end of true anticorruption reform.

The legislation was drafted as the long-standing conflict between NABU and the Prosecutor-General’s Office deepened.

Last week, Prosecutor-General Yuriy Lutsenko unmasked an undercover NABU agent who had been involved in operations to take down allegedly corrupt officials and members of parliament and foiled a seven-month sting operation being carried out by the bureau to curb suspected corruption in the State Migration Service.

After the bill was removed from consideration in parliament, NABU issued a statement thanking Ukraine’s international allies and backers for their support in the fight against corruption.

"Looks like this specific battle for anticorruption is won. Though this is definitely not the end," said Olena Halushka from the Anticorruption Action Center.

With reporting by Reuters