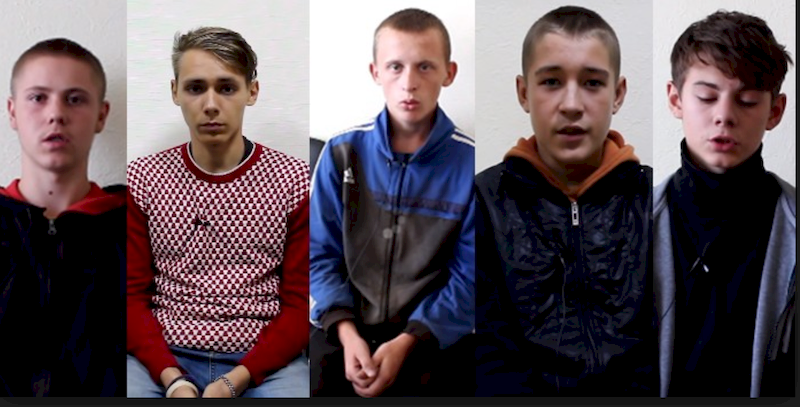 Five teenagers, as young as 15 when seized, have been held in captivity in the self-proclaimed ‘Donetsk people’s republic’ [DPR] for well over a year.  Both the DPR militants and Russia made propaganda uses out of forced ‘confessions’ from the young lads immediately after their seizure, but appear to be simply holding them imprisoned despite promises that they would be released by the end of 2016.

Seven young lads were first reported, both by the militants and by Russia, to have been ‘arrested’ on sabotage and terrorism charges. Seven names were given, so it is unclear whether two lads were released.  News of Donbas has since spoken of five lads, all from Yasynuvata, with four of them underage when seized.

The ‘arrests’ were reported on September 12, 2016 with it claimed that the seven teenagers had been blowing up civilian and military targets for Ukraine’s SBU [Security Service].  As with similar claims made by Russia’s FSB, the story was substantiated only by supposed ‘confessions’ which were widely shown on militant and Russian television.

The announced ‘arrests’ came at a time of heavy shelling undermining the latest ceasefire, and after a month in which the DPR militants constantly pushed the idea that vigilance was needed against ‘saboteurs’.  Even children were encouraged to report anything ‘suspicious’.

The so-called ‘DPR ministry of state security’ asserted that seven lads had carried out acts of sabotage on instructions from the SBU.  These had supposedly been carried out between May 2015 and June 2016, after an SBU officer Ihor Ritsko [nom de guerre Almaz] ‘recruited’ the oldest boy Bohdan K., who was 18 when seized.  The plan was supposedly to “create a group from his friends to earn money by extracting debts from businesspeople in Yasynovata, then later acts of sabotage on DPR targets’, all of this, allegedly, with the SBU overseeing it.

The kids were claimed to have first been enticed by money, then blackmailed and threatened with punishment for crimes already committed.  Particular cynicism was seen in the claims that this implausible SBU ’recruitment’ was ’proof’ of Ukraine violating the kids’ rights.

The plot line was chillingly similar to that presented by Russia’s FSB to justify its seizure of at least four Ukrainians, in or near occupied Crimea. In this case, at least, the teenagers did not appear to have been beaten, but they certainly spoke on the video as though repeating what they had been told to say.  Since they were totally under the militants’ control, it is not difficult to understand the value of such confessions, especially since there was nothing to suggest that the boy had been allowed to consult with real lawyers.

Two days after the ‘arrests’ were reported by the militants, Russia’s Investigative Committee got involved.  Its announcement asserted that a “criminal investigation has been initiated against SBU officer Ihor Rytsko and other unidentified individuals in relation to evidence of the crime set out in Article 356 § 1 Russian Federation criminal code (the use of prohibited means and methods of war).”

Although it was allegedly setting out the position of ‘Russian investigators’, all the details were those first produced by the ‘DPR ministry of state security’ which were also given with no questions asked by state-controlled Russian media (more details here).

The DPR militants have also reported at least three more ‘arrests’ in the last week on alleged ‘spying’ or ‘sabotage’ charges.