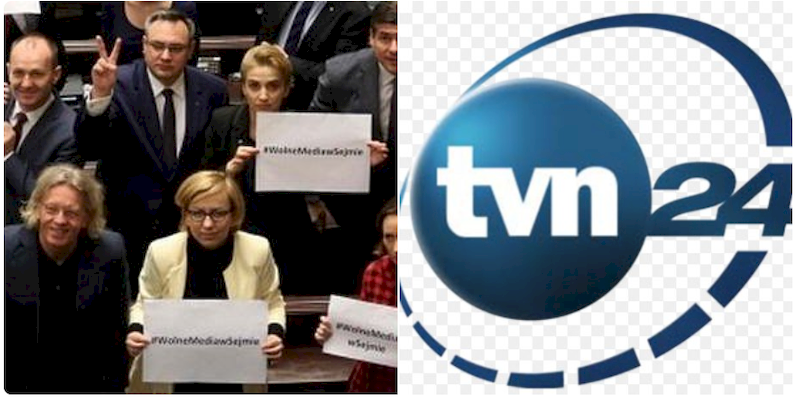 A massive fine has been imposed on one of the main independent television channels in Poland over coverage of protests in the Sejm and outside it in December 2016.   The move is especially chilling as the court challenges already promised by the channel are likely to come after judicial changes widely viewed as jeopardizing the independence of judges in Poland.

In the middle of December 2016, journalists held a picket outside Poland’s Sejm, protesting against  the restrictions on their work proposed by the ruling PiS party.  During a debate in the Sejm on the 2017 Budget, an opposition MP Michał Szczerba held up a sign reading ‘Free media!’ and was, for this reason alone, expelled  His opposition colleagues then blocked the tribune in protest, with this being supported by peaceful protesters outside.  The PiS government continued voting in the Budget without the opposition and with serious infringements of procedure.

One of the first changes that the PiS government made after their victory in the 2015 elections was to public television with the resulting politicization of the news broadcaster and increasingly manipulative nature of the programs having been noticed and criticised by international media watchdogs and by European structures.  No fines have ever been imposed by the National Broadcasting Council (KRRT), probably because its makeup was also changed in July and September 2016.  Three members, including the Head Witold Kołodziejski, were appointed by the Sejm in which PiS has a majority, and two by President Andrzej Duda who almost always follows the same line as the PiS government.

This Council on December 7 imposed a fine of nearly 1.5 million PLN (357 thousand EUR) on TVN 24, claiming that the broadcasting of events in the Sejm and outside it from 16-18 December 2016 constituted “propaganda of actions running counter to the law and promoted behaviour jeopardizing security”

A full justification of the charges has yet to be issued and Gazeta Wyborcza’s attempt to get any specific information from the members of the Council on Monday ended in failure.  TVN24 has strongly denied the allegations.  It points out that the decision fails to note that TVN24’s reports included comments from PiS MPs, from the head of the party Jarosław Kaczyński, whose addresses were broadcast live and others.  The opinion does not provide even one example of false reporting or mistakes.

It considers the allegations to be based on a report lacking in objectivity by a person linked with TV Trwam and the University of Social and Media Culture in Toruń.  Both are connected with Tadeusz Rydzyk, an extremely conservative Catholic Priest who has been the recipient of very generous grants since the change to a PiS government in 2015.  The opinion used to justify the huge fine was put together by a lecturer at Rydzyk’s university which in itself reflects a conflict of interest since Rydzyk’s media concerns are in competition with TVN24.

OKO.Press spoke with Krysztof Luft, a member of the Broadcasting Council before the present changes.  “I’d say that this is the start.  From the beginning, the current Council was fairly restrained in such decisions, knowing that they were all under the control of the courts – now they clearly see no brakes [on their actions].  I would normally be relaxed that this decision wouldn’t hold up in court as it would be difficult to justify it.  Now, however, we know that this dispute will end up in the new Chamber of Control and Public Affairs of the Supreme Court which will shortly be formed by PiS”.

TVN24 will first need to appeal to the District Court in Warsaw, however here the Minister of Justice who is also, illegally, the Prosecutor General has already made changes to the makeup of the Court following Duda’s signing into force of one of the three unconstitutional laws jeopardizing judicial independence which the Council of Europe, its Human Rights Commissioner and US State Department strongly criticized in the summer.

The other two bills were very slightly changed and are now likely to be passed by the upper house of Poland’s government which is also PiS-controlled.  Despite warnings from the Council of Europe’s Venice Commission and the European Commission, it unfortunately seems most likely that Duda will sign the bills, as well as other dangerous electoral legislation.  Both the changes to the Supreme Court and the electoral laws could place in jeopardy free and fair elections in Poland, with the ruling party now in power, just as was the case in Ukraine under Viktor Yanukovych, exerting undue control over those called upon to ensure fair elections and to determine whether there have been irregularities.

There have long been indications that PiS is also intending to use measures to restrict foreign ownership of the private media in Poland as a method of imposing control over such outlets.  This was something that the current regime in Russia used to impose a system where virtually no TV channels do not follow the government line and very few printed or Internet publications.  This draconian fine for entirely unproven ‘propaganda of illegal actions’ by an independent TV channels may well be the harbinger of what is to come.