UN disbands Russian-blocked ‘fact-finding mission’ into mass killing of Ukrainian POWs at Olenivka prisonRussian FSB uses total isolation to torture and try to break abducted Kherson woman Imprisoned Crimean artist faces ‘terrorism’ charges for protesting Russia"s war against UkraineHis mother was shot, and the place of work was destroyed — Russian occupation harshly affected the life of Trostianets resident Serhii PentinShe said goodbye to life when the airstrikes made the houses collapse like a house of cardsRussia moves to legislate ‘impunity’ for all war crimes committed in occupied Ukraine Crimean Tatar civic journalist sentenced to 11 years for refusing to collaborate with Russia"s FSB ‘For all the evil they have done, they will be held accountable before God!’‘There were more than five thousand of us in the shelter’ — account of the first war days in MariupolUkrainian civic journalist was ‘voluntarily’ abducted, asphyxiated and beaten by Russian FSBMoscow tries to justify its war crimes in Ukraine by glorifying its soldiers as ‘heroes of Russia’ Russian MP promises a child from Kyiv missiles as a "New Year present"Russian propaganda media and ex-President guilty of direct incitement to genocide in Ukraine, report findsRussian invaders abduct Ukrainians in large numbers for grotesque ‘international terrorism trials’ ‘There was nothing left of the neighbor, only shoes...’Russia sentences Crimean Solidarity activist to 17 years for defending political prisoners ‘I was afraid they would cripple me’Ukrainian poet and writer Volodymyr Vakulenko killed after being seized by Russian invaders Despite Russia admitting to terrorism against Ukraine, OSCE will not expel it Lecturer beaten, ‘tried’ and imprisoned in Russian-occupied Crimea for a Ukrainian patriotic song
• Topics / News from the CIS countries 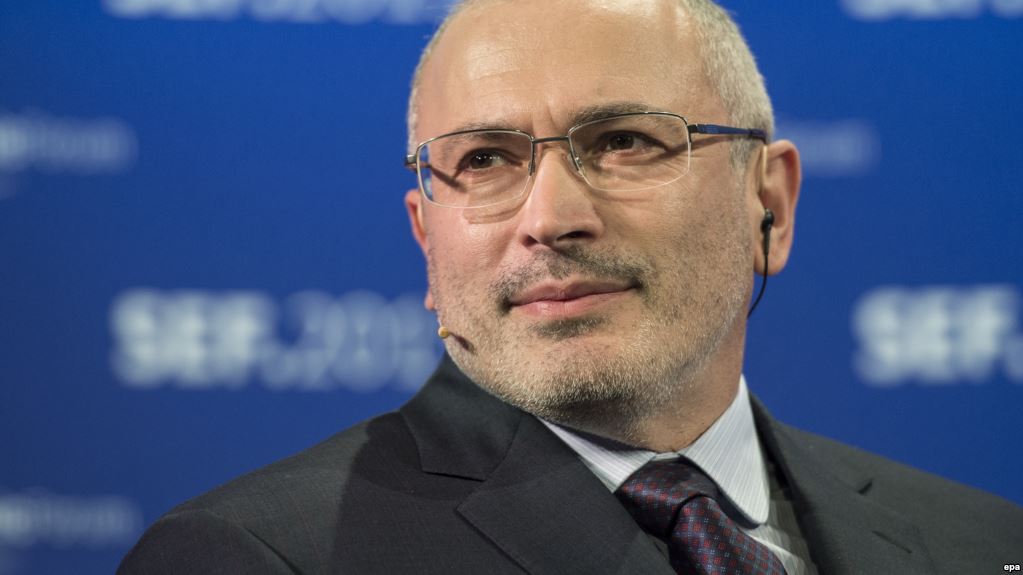 The regulator’s website on December 12 posted a notice that it had received a demand from the Prosecutor-General’s Office to restrict access to Internet sites that "distribute information from organizations deemed undesirable in Russia."

Open Russia reported that its main website, OpenRussia.org, and five others had been blacklisted by Roskomnadnzor for "calling for disorder."

The organization stressed that its Russia-based branch had not been included on the list of undesirable organizations.

Khodorkovsky the same day denounced the blocking of the websites as "an abuse of official power to benefit the rule of a criminal group."

Amnesty International also denounced the move, saying in a December 12 statement that Russian authorities "are clearly targeting Open Russia in a bid to suffocate dissent and pluralism in the Russian media and expunge Khodorkovsky’s presence in Russian politics and society."

Once Russia’s wealthiest tycoon, Khodorkovsky was arrested in 2003 and served 10 years in prison after being convicted of tax evasion and other financial crimes in two trials widely seen as politically motivated.

Khodorkovsky now lives in Western Europe after leaving Russia when he was pardoned by Putin and released from prison in 2013.

Blocking the websites is the latest in a series of moves by the Kremlin against Open Russia and Khodorkovsky-connected organizations.

The ministry listed two branches of Open Russia registered in the United Kingdom, as well as the U.S.-based Institute of Modern Russia.

The Open Russia NGO registered in Russia, which operates the Openrussia.org website, was not listed. The Russian NGO also does not appear on the separate Justice Ministry list of Russian NGOs considered to be "foreign agents."

Police have searched the homes of the organization’s employees in recent months, and two employees have been fined, according to rights groups.

The organization’s deputy director, Ilya Novikov, fled the country in June, after what he said were "constant attempts by police to conduct searches" at his workplace.

Amnesty International said in its December 12 statement that following the move against the Britain-registered branches, "the Prosecutor’s Office gave assurances that the ban wouldn’t affect the activities of the Russian-based movement of the same name."

"Today’s events now show that promise to be nothing more than a brazen lie. The authorities have shown their true intent to target and harass Open Russia out of existence,” Denis Krivosheev, Amnesty International’s Deputy Director for Europe and Central Asia said.

The moves against Open Russia come as the country heads toward a presidential election in March 2018.

President Vladimir Putin, who has ruled Russia either as prime minister or president since 2000, announced earlier this month that he will seek a fourth term. Because of the country’s tightly controlled political environment and managed elections, analysts believe he is almost certain to be declared the winner.

Charismatic opposition leader and anticorruption activist Aleksei Navalny has been barred by the authorities from participating in the election because of a felony fraud conviction that he dismisses as politically motivated.