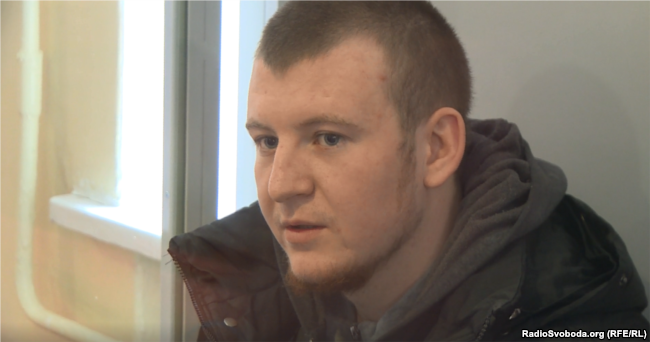 The trial is underway in the Luhansk oblast of 22-year-old Viktor Ageyev, a Russian whose repeated acknowledgement that he was a contract soldier in the Russian army was reiterated by his mother, and apparently corroborated by other evidence.  The fact that Ageyev has radically changed his position, and is now represented by a lawyer who refuses to disclose who is paying him, is in itself nothing new.  What is more disturbing is that the prosecution is now going along with this new story.

The possibility can certainly not be excluded that Ukraine’s SBU [ simply did a sloppy job, and that Ageyev was not a contract soldier when captured in June this year.

This would leave multiple questions, regarding Ageyev’s own testimony, the extra evidence first identified by InformNapalm, and discrepancies in the story which Ageyev is now telling.

It seems no less likely that this change in the prosecution’s position is linked with the first progress this year on negotiations aimed at the release, via an exchange, of almost half of the known Ukrainian soldiers and civilians held prisoner by the Kremlin-backed militants of the self-proclaimed ‘Donetsk and Luhansk people’s republics’ [DPR, LPR].  It is clear that Ageyev and the two Ukrainian citizens on trial with him are hoping to be part of an exchange.  The progress ostensibly began with a phone call from Russian President Vladimir Putin.  Since Russia is continuing to deny any military engagement in Ukraine, the progress may have been made contingent on Ukraine changing its stance on Ageyev’s status while in Donbas.  Ageyev does not appear to be on the exchange list at present, but his radically changed stand would make sense if he had been promised help in getting released through such an exchange.

The capture and initial story

Ageyev was captured on June 24, 2017, near the village Zholobok in the Luhansk oblast after a clash between Ukrainian soldiers and an LPR sabotage & reconnaissance unit.

Vladyslav Klochkov, the commander of the Ukrainian unit, reported at the time that the sabotage group had been led by a Russian officer, Aleksandr Shcherba (codename Alex) which had been attempting to penetrate the area where the Ukrainian brigade was located.  Militant sources have claimed atrocities by the Ukrainian side, though have not provided any proof.  Klochkov’s version is that the fighters were ordered to surrender, but that Shcherba and a sniper attempted to shoot their way out and were killed.  Four men were captured, including  Ageyev, who was, according to the report, found together with weapons used by the Russian Army.  Ageyev was alleged to have been a gunner for this unit.

It was the BBC Russian Service who first reported that Ageyev had returned to the Russian Army after finishing his military service, and signed a contract in March 2017.  The BBC had been fobbed off by the Russian military, but had spoken with two former colleagues.  One of the two, speaking on condition of anonymity, had confirmed that both had finished military service in 2016, but that Ageyev had later gone on to serve under contract in military intelligence.

Despite the public denials from Moscow after the BBC report was published, Ageyev’s mother did not change her testimony.  In a letter to letter to the Altai branch of the Yabloko political party, published by Novaya Gazeta, she asked for help in freeing her son who had left on March 18 to serve on contract in Bataisk in one of the units in the Rostov oblast. She wrote that he had phoned from there several times, once a week.  The last call had been on May 30 during which he had said nothing about any plans to terminate his contract. He had been pleased with his new work, she added, and had sent the order issuing him with a new military rank of lance-corporal, Order № 866 issued on 4.05.2017.”

Only three men are on trial: Ageyev; Bohdan Venger and Danylo Hladkov.  A fourth man, Andriy Stoyanov, concluded an agreement with the prosecution and has already received a 6-year sentence.

Journalists from Radio Svoboda’s Donbas.Realii and Novaya Gazeta have given similar reports of the hearing on November 14, and the key shift.  Now Ageyev himself is denying having been a contract soldier, and the prosecutor is not saying that he was.  The indictment says that Ageyev was a private individual, though does clearly state that he expected remuneration for his supposed role within the ‘LPR militia’.

The prosecutor Oleksiy Mokhort even stated that during the pre-trial investigation, Ageyev had not said that he was a current Russian soldier. “No other proof of his being in service have not been received”.

Ageyev’s own statements are now as evasive and contradictory as those given back in June by the Russian military.  When confronted by Donbas.Realii with his previous assertion of having been a contract soldier, he says:

“Well I served in the Russian army on contract, but I joined the LPR’s people’s militia”.

The Russian military had claimed that he had done his military service and then left, thus never being a contract soldier.

Ageyev gives ‘no comment’ about how he purportedly ended up in the ‘militia’, and claims that he saw no Russian military men in Donbas.

Novaya reports that a lawyer, Viktor Chevhuz turned up and introduced himself to Ageyev in the courtroom, showing him his mother’s signature on the relevant document about his participation in the case. Chevhuz refused to say who was financing his legal services.

Ukrainian media had reported back in October that Ageyev was to be represented by a state-appointed lawyer as Russia was refusing to provide him with one.  At that state there was nothing to indicate that the story had changed.

A top Ukrainian official had spoken back in June about the likelihood that Ageyev would eventually form part of an exchange, and this is clearly what he is hoping.

There had been a precedent for this, in the case of the two military intelligence officers captured after killing a Ukrainian soldier in the Luhansk oblast two years ago.  Yevgeny Yerofeyev and Alexander Alexandrov were eventually exchanged for Nadiya Savchenko.

They too had initially spoken freely about being current officers, but had then later changed their story.

There, however, the similarity ends, since the Ukrainian prosecutor demonstrated and the court agreed that the two men had been proven to have, as Russian military intelligence spetsnaz men, committed the impugned crimes. They were sentenced to 14 years before the exchange. During the first month after his capture, Ageyev asserted that Yerofeyev “had been removed, killed” after his return, because “he said too much”.

The situation is now frustratingly different with not only Ageyev himself, backed by a new lawyer, but the Ukrainian prosecution going against all previous statements and apparent evidence that Ageyev was, as he said, a contract soldier.

Some of the Ukrainian soldiers and civilians held hostage have been imprisoned in shocking conditions for two years or more, and it is impossible to understate the importance of any measures aimed at securing their release.

If, however, turning a blind eye to evidence backing Ageyev’s original testimony is part of the deal, the price is high.  Russia has every reason to hide proof of its direct military engagement in Donbas.  Ukraine currently has one case against Russia before the International Court of Justice and is also hoping that the International Criminal Court will agree that Russia is a party to the war in Donbas, and therefore that this is an international military conflict under its jurisdiction.  While there have been numerous reports clearly spelling out the degree of Russia’s military engagement, all evidence of military servicemen sent to kill Ukrainians in Russia’s undeclared war against Ukraine is of vital importance.