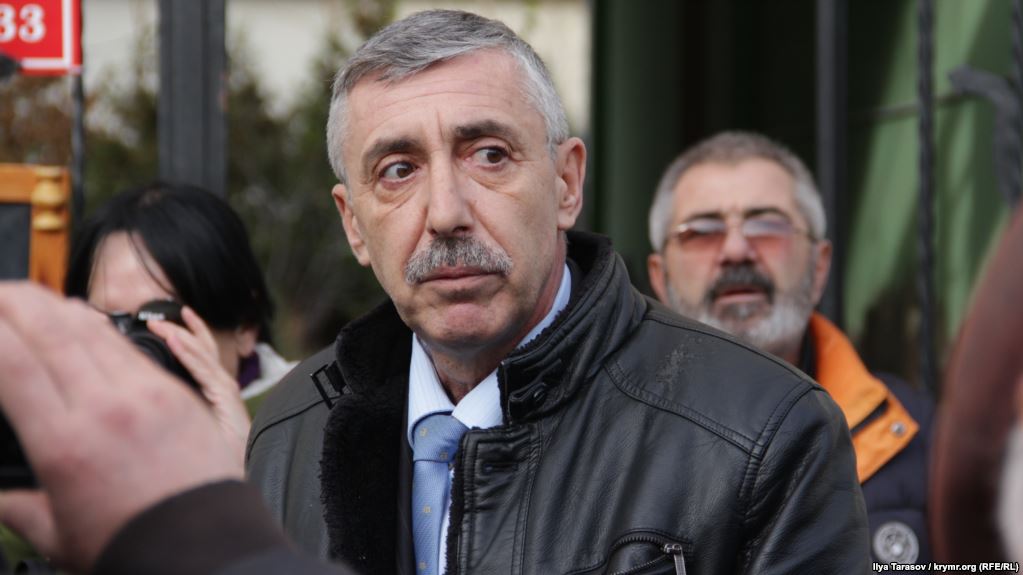 The ‘trial’ has begun in Russian-occupied Crimea of Suleyman Kadyrov, a 54-year-old Crimean Tatar activist, who is facing a possible 5-year sentence for a Facebook comment stating that Crimea is Ukraine.  While the claim that this constituted a ‘public call to action aimed at violating Russia’s territorial integrity’ makes this court spectacle identical to those against journalist Mykola Semena, and Crimean Tatar Mejlis leader Ilmi Umerov, there is a telling difference.  The position taken by Kadyrov in his comment is not just that of the entire democratic world, but is also echoed by Russian presidential candidate Ksenya Sobchak who has spoken out in Kadyrov’s defence.

Sobchak has no chance of winning against Vladimir Putin in elections few believe are fair, however her comments on Crimea probably reduced the widespread suspicion that her candidacy was totally fictitious.

At a press conference on October 24, Sobchak stated that “From the point of view of international law, Crimea is Ukrainian.  We broke our word, we violated the 1994 Budapest Memorandum.  We gave a promise that we didn’t keep”.

Told about the imminent trial of Kadyrov, Sobchak asserted that “there is not a word in the law about a statement of fact, and even about expressing an opinion that diverges from the state’s.  You can’t prosecute me for that, and you can’t Suleyman Kadyrov either”.

Russia’s leaders have presumably decided the fallout from trying to prosecute Sobchak would be too damaging.  They have not, unfortunately, taken this position with others, and Article 280.1 of Russia’s criminal code, introduced shortly after its invasion and annexation of Crimea has been used against both Ukrainian citizens in occupied Crimea and people in Russia for no more than opposing Russian occupation.

Kadyrov, for example, has been charged over a reposted video from ‘Demyan Demyanchenko’, which he accompanied with the commentary: “Suleyman Kadyrov agrees! Crimea is Ukraine.  It always was, is and will be!  Thanks to the author for the video.  I support it”.

This case is also slightly different in that the charges fly in the face of the ‘expert assessment’ which found no ‘public calls’ in Kadyrov’s words.

It does not, however, differ in the use of falsified testimony.  At the court hearing on December 20 eight ‘witnesses for the prosecution’ were questioned.

Alexei Ladin, who, together with Emil Kurbedinov, is representing Kadyrov, notes that the alleged witnesses were “so-called members of the public, official witnesses (to the search of Kadyrov’s home), as well as one FSB officer.  The protocols of the questioning of the search witnesses and members of the public are identical, down to the last comma. How can a pensioner and a young guy give the investigator identical testimony? For us it’s clear that these protocols were drawn up by the investigator as suited him”, Ladin explains.  Emil Kurbedinov was journalist Mykola Semena’s lawyer and says that he recognized two of the so-called search witnesses as having fulfilled the same role in the trial of Semena.  In both cases, they claimed to have just by chance been around the FSB offices and were asked to be witnesses. The ‘court’ rejected the defence’s application to have these protocols removed from the case.

Suleyman Kadyrov  calls the case against him “provocation from the security service” as a reaction to my civic position and human rights activities”.

Officers, many with machine guns, turned up early on Oct 5, 2016 and showed Kadyrov a search warrant.  He was told that the search was ‘on suspicion of extremism’, but was not told that criminal proceedings had been initiated.  Kadyrov immediately stated that he would not give any testimony or explanations, nor would he sign their search protocol, since his rights were being violated.  He asked to have his lawyer present, and witnesses he chose, but the officers insisted on using the ‘witnesses’ they brought.  The charges were formally laid on October 11, 2016, then in April 2017, well before the trial, Kadyrov became the latest Ukrainian to be added to Russia’s ‘List of Terrorists and Extremists’, with this meaning that the bank account from which he received his pension was blocked, as well as numerous other difficulties on an everyday basis.

He left the police force in March 2014, unwilling to work in the Russian police after annexation, and concentrated on human rights and civic activities.  As well as being a member of the Feodosia Mejlis or self-governing body, he also provided legal aid and consultation to other Crimeans.