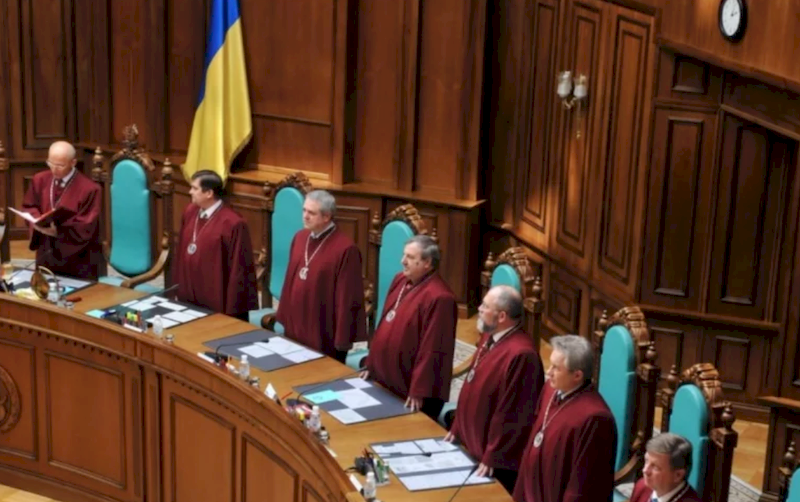 Ukraine’s Constitutional Court has revoked a highly controversial law passed in early 2016 which enabled political parties to strip MPs of their mandate .  The Court confirmed what election watchdogs had said from the outset, namely that the law is in breach of Ukraine’s Constitution and flouted the principle that it is the people who vote for their representatives, not the party hierarchy.   The bill had been slammed by the Council of Europe’s Venice Commission, but the latter had also reiterated its criticism of Article 81 of Ukraine’s Constitution which allows for MPs to be removed if they leave their faction.  The Constitutional Court was reacting to a constitutional submission from 49 MPs specifically related to the 2016 law, which may (or may not) explain why it did not address the so-called ’imperative mandate’ in Article 81.  Certainly the arguments given would seem to apply just as much to that constitutional norm.

Law no 3700 allowed for a candidate who had already been elected to be removed from the candidate list (and thus lose his or her place in parliament) if the decision was taken by the relevant party’s congress.  The Committee of Voters of Ukraine [CVU] had condemned the bill as “a law on party dictatorship” even before it was passed by a small majority in the Verkhovna Rada on February 16, 2016.  CVU and the other main election watchdog OPORA, as well as the authoritative Reanimation Package of Reforms [RPR] all condemned the bill as having grave consequences for party democracy, violating the constitutional principle of direct suffrage and stimulating political corruption.  A political party would be able to exclude candidates from the list after the voters had indicated their choice, thus overriding the election result.  The law also failed to provide clear grounds for removing a candidate.  All called on President Petro Poroshenko to veto the bill and warned that this was a means of usurping power, carrying the danger that parties would bring in convenient, obedient MPs, or even businessmen, etc. for money.

The President ignored these calls and signed the bill into law.  Earlier in December, CVU reported that party factions had used the law over the past two years to remove 43 people from their candidate lists, with Samopomich having excluded 40% (11)  of their candidates after the 2014 elections. CVU Head Oleksiy Koshel noted that “in 2014, parties had added people to their lists as part of political deals with influential political groups.  With time, these agreements had ceased to be relevant, however the people remained in the lists.”  The parties had needed the ‘law on party dictatorship’ to make sure that “the right people” actually entered parliament.  The law had been applied in December to enable Valeria Zaruzhko from the Radical Party to take the place of Andriy Artemenko, who was controversially stripped of his citizenship and, therefore, his mandate. Zaruzhko had been on the list at No. 28 during the 2014 elections, and another person should have been chosen, however he had been post-factum removed from the list in March 2016.

The introduction of that law had coincided with the decision to strip of their mandate two MPs - Mykola Tomenko and Yehor Firsov.  Both had been elected as part of the Bloc of Petro Poroshenko, but had left the faction, with Firsov having done so, he said, in protest at what he called corruption among the leadership.  CVU Head Oleksiy Koshel pointed at the time to the “extraordinary speed” with which the MPs had been ousted in an interview given to Deutsche Welle.  The decision was taken at a faction congress behind closed doors on March 25, and by March 28 the Central Election Commission had already stripped them of their mandate.

Such closed congresses could also be used to remove other candidates from the list after the voters had made their choice of party based on a certain list, and the latter possibility, in Law No. 3700, has now been revoked.  The Constitutional Court found that this “contradicts the principle of the will of the people; of legal definition; and of reasonable expectations as component parts of the rule of law; freedom of political activities; free elections and the free expression of the will of the voters; as well as the free deputy’s mandate”.   The law enabled a political party to flout the will of the voters.

The Constitutional Court’s judgements are not subject to appeal, and Law 3700 has therefore been revoked.  The possibility of ousting MPs because they have left their faction, however, remains in place.