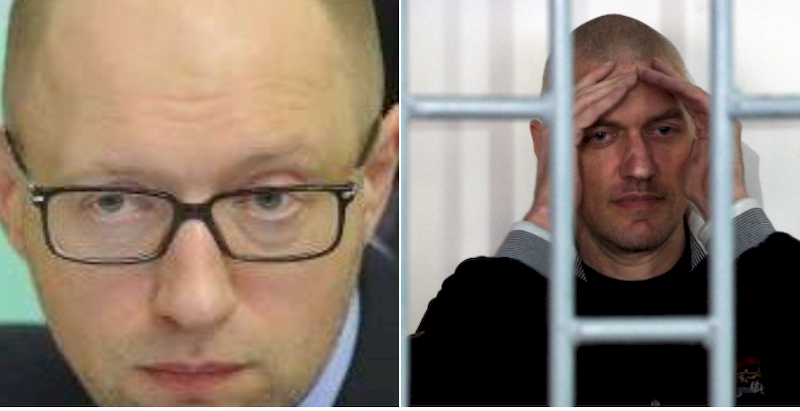 Arseny Yatsenyuk was stopped at Geneva Airport on the evening of December 23  because of an ‘arrest warrant’ issued by Russia against the former Ukrainian Prime Minister.  The charges of having fought against Russian federal forces in Chechnya 23 years ago, when Yatsenyuk was a 20-year-old law student in Ukraine, are absurd but cost the ex-PM and his daughter a mere ten minutes of their time.  Incomparably less than the price paid by Stanislav Klykh and Mykola Karpyuk, the real two victims of what has been called “Russia’s most monstrously falsified trial of Ukrainian citizens since it’s annexation of Crimea”.  Both men have been imprisoned for over three years after facing savage torture to extract the ‘confessions’ now touted by Russia’s Investigative Committee as pretext for the arrest warrant against Yatsenyuk.  While Yatsenyuk’s press secretary Olha Lappo is right to stress the real consequences of this grotesque ‘case’, it would be appropriate for her and Yatsenyuk to recall Karpyuk and Klykh’s plight.

A Russian court reported on March 27, 2017 that it was issuing an arrest warrant in absentia against Yatsenyuk on the basis of an application from a Russian Investigative Committee ‘investigator on particular important cases’.  The charges are identical to those brought against Klykh and Karpyuk of supposed involvement in the fighting in Chechnya against Russian federal forces in late 1994 and early 1995. They include: taking part in a gang and its attacks; the murder of two or more people in connection with their carrying of official duty, and attempts to commit such murder (multiple parts of Articles 209 and 102 of the Russian criminal code, and 102 of the Russian SSR criminal code).

It was claimed then that Yatsenyuk had been placed on ‘the international wanted list’ on Feb 21, 2017, with this normally referring to Interpol’s issuance of a Red Notice.  According to Lappo and Ukrainian media reports, Russia’s request for such a Red Notice in Yatsenyuk’s case was rejected as being politically motivated.

It would certainly be difficult to find any other justification for the accusations.  The first public claim that Yatsenyuk, who was then Ukraine’s Prime Minister, had fought in Chechnya came in September 2015 in an interview given by the head of the Investigative Committee Alexander Bastrykin.  The latter treated the purported involvement of Yatsenyuk and other prominent Ukrainians as established fact and claimed that Yatsenyuk had tortured and murdered Russian soldiers.  The claim was so absurd, the photoshopped images of Yatsenyuk as a Chechen fighter so hilarious, that many disregarded the more menacing aspect of the allegations, namely the torture needed to extract such surreal ‘confessions.

Both Klykh and Karpyuk were effectively abducted after being tricked into coming to Russia and then held totally incommunicado, Karpyuk for 18 months, until the eve of the ‘trial’, Klykh for ten months.

Klykh is a historian from Kyiv who was taken prisoner in August 2014 after going to the Oryol oblast in Russia to see a woman he’d met the previous year in Crimea.  If Karpyuk, as a politician closely involved in two nationalist organizations, was an obvious target for Russia’s undeclared war against Ukraine, Klykh’s link to any nationalist group was fleeting and far in the past.  In his case, as in that of several other political prisoners, such as Serhiy Lytvynov and Yury Yatsenko, it really does seem that being Ukrainian was enough.

The case was immensely cynical, and not only because of the number of Russian soldiers and mercenaries using Russian weapons to kill Ukrainian soldiers in Donbas.  The ‘investigators’, prosecutors and court showed total disregard for the weighty evidence that both Karpyuk and Klykh had been in Ukraine during the period in question and that the ‘confessions’ they had given had been extracted through torture.  They were just as unconcerned that the charges were contradicted by historical fact.

A third Ukrainian’s testimony is generally also cited.  Olexander Malofeyev was sentenced in October 2010 to 24.5 years’ maximum security for his supposed part in the fighting in Chechnya.  Malofeyev had long lived in Russia, where he was already serving a 23-year sentence. He is also a drug addict with several life-threatening illnesses meaning that pressure could easily be exerted by taking away his medication. Certainly the Memorial Human Rights Centre has pointed to major inaccuracies regarding his account of historical details, and he can certainly not be seen as a reliable source.

Russia claimed that Klykh (b. 1974) and Karpyuk (b. 1964) had, together with Yatsenyuk and other prominent Ukrainian politicians, taken part in battles in Chechnya in Dec 1994 and Jan 1995, carried out all kinds of atrocities and killed 30 Russian soldiers.   Karpyuk, who was the deputy head of Right Sector and member of the older Ukrainian National Assembly – Ukrainian Peoples’ Self Defence (UNA UNSO)  was accused of creating and leading a band called ‘Viking’.  Klykh, who had once briefly been a member of UNA-UNSO while at university, was supposed to have taken part in it.

The case was entirely based on their ‘confessions’ extracted while being held incommunicado and without proper lawyers, and those of Malofeyev.  Both Klykh and Karpyuk retracted their ‘testimony’ after being allowed to see real lawyers and their shocking accounts of the torture used to obtain the confessions are part of applications to the European Court of Human Rights.

There was, however, documented evidence that Klykh had been taking exams, and plenty of witnesses to confirm that Karpyuk was caring for his dying mother during the months when they were alleged to have been in Chechnya.

What is especially staggering in this case is the degree to which the charges clashed with provable historical fact. The Memorial Human Rights Centre has followed both Russia’s wars in Chechnya and was therefore well-placed to assess the prosecution’s case.  In a four-part analysis, it demolished the entire indictment and left no doubt about the methods that had been used to extract insane ‘confessions’ to heinous crimes supposedly committed together with Yatsenyuk & Co.   The methods included threats to apply the same torture to Karpyuk’s wife and small child.

On May 26, 2016, Judge Vakhit Ismailov at the court in Grozny sentenced Karpyuk to 22.5 years, Klykh to 20 years, with this later upheld by the Supreme Court, as have been all such politically-motivated trials against Ukrainians.  There remain very real concerns about Klykh’s mental and physical health, yet Russia is refusing even to comply with a bilateral agreement and extradite the two men to Ukraine.

During a recent visit from a Russian lawyer, Klykh mentioned that he had received letters from people in other countries.  He expressed gratitude and said that all such correspondence helps him to not lose hope and gives him strength.