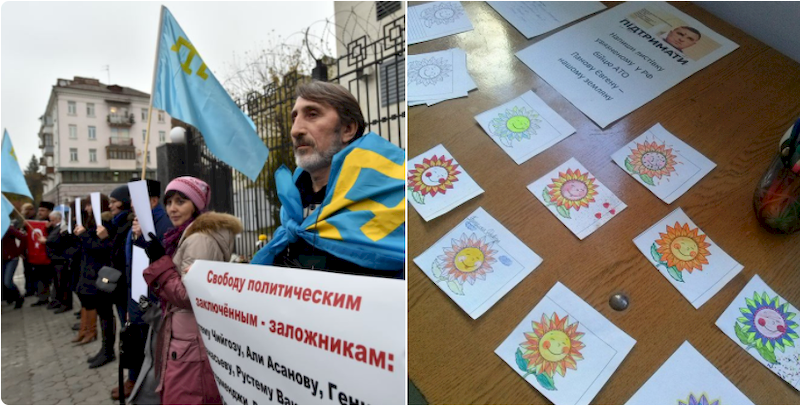 Moscow is holding over 60 Ukrainian political prisoners in occupied Crimea and Russia, with many. like Oleg Sentsov and Ruslan Zeytullaev, held thousands of kilometres from their children.  Every letter sent to them is “a breath of freedom”, civic activists stress.  It is also an important message to the Kremlin that the men are not forgotten, with this having very direct impact on their treatment.  As human rights activist Oleksandra Romantsova puts it, “if a political prisoner gets two bags of letters, they won’t be able to destroy him”.

The #LetMyPeopleGo initiative, launched by Euromaidan SOS, is holding what is, unfortunately, its fourth New Year Marathon of Letters to Kremlin’s Hostages.  Over recent months, the number of prisoners has risen alarmingly, and is now well over 60 – and that is assuming that we know about all those held on politically motivated charges in Russia.  Given the number of cases where men have been held incommunicado and tortured into signing ‘confessions’, the number could easily be higher.

Russia’s FSB uses particularly ugly forms of psychological pressure against political prisoners, especially those held in indefinite detention.  One such method, taken from their Soviet KGB predecessors, lies in holding the men in isolation, and trying to convince them that nobody cares about their fate.

Our letters prove them to be lying.

The letters tell the prisoners that they are not forgotten, and fill them with new strength.  In a poignant letter to all those who had written to him, or taken part in actions calling for his release, Yevhen Panov wrote:

“I am very grateful to you all for your support and when, as they say, “gloom descends”, I re-read the letters that came to me in Lefortovo Prison [in Moscow], and it is as though I become charged with energy from them.”

It is, unfortunately, up to the prison authorities (or the Kremlin) whether letters get through, but certain rules, if followed, make it much more likely that they will pass the Russian censor.  All letters must be in Russian.  If this is a problem, the letter at the bottom here, perhaps with a picture or similar, would be fine.

PLEASE keep off political subjects, and do not comment on the case itself.

The envelope should contain both the full name (first name, patronymic and last name) of the addressee, and his year of birth.

If possible, enclose a blank sheet of paper and blank envelope.  These are in short supply, and the person may be apply to reply to your letter (please also clearly write out your name and address).  There is often a restriction on the weight of any letters, so lighter paper is best.

Let My People Go ask, if possible, to send them photos of the letters, either via Facebook or to lmpg.ukraine[at]gmail.com.  They will also be able to tell the men’s relatives that they are not forgotten.  100 children in occupied Crimea have seen their fathers taken from them.  It is important also for them, and the men’s wives, parents and other relatives to know that others are thinking of them.

It is also imperative to ensure that the Kremlin is constantly challenged to release the prisoners and to stop the abductions and arrests on fabricated charges.  The following hyperlinks contain brief information about each case, as well as advice on writing to them.

In the case of prisoners held in Crimea, it is best for the moment to send letters to the Center for Civil Liberties, 9-G Baseina St., Apt. 25, Kyiv 01004, Ukraine.   The list here gives the men’s names, as they need to be written on the letters, as well as their year of birth.

Russia has now refused to extradite Oleg Sentsov and Oleksandr Kolchenko, claiming that they ‘automatically became Russian citizens’ after Russia’s invasion and annexation of Crimea.  It has recently also refused to return Stanislav Klykh, Mykola Karpyuk, Oleksiy Chyrniy and Valentin Vyhivsky without providing any excuse.  It is very clearly trying to isolate all prisoners so as to put pressure on them, and in the hope that the world ‘forgets’ about them.

It is for us to show them that this will not happen until all Ukrainians held imprisoned are released, and until the vicious spiral of occupation and repression ends.

The number of prisoners is very great –  please choose one or more of them.  Help by sending them a vital message of support, and also pass on the details about their case to journalists and politicians in your country.