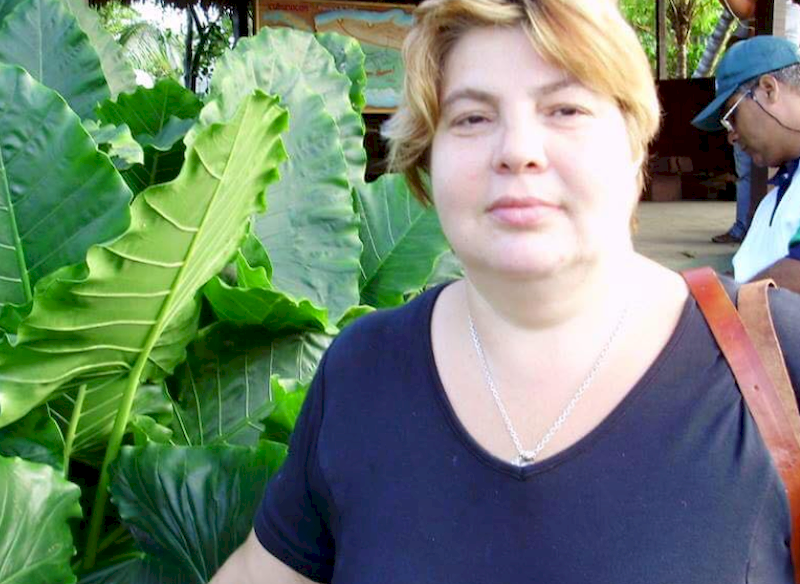 A court in Russian-occupied Crimea has passed a 2-year suspended sentence on 54-year-old Larisa Kitaiska over supposed ‘Russophobic’ posts on Facebook.  On 28 December 2017, the Yalta City ‘Court’ found the Ukrainian activist guilty of ‘incitement to enmity’ (under Article 282 § 1 of Russia’s criminal code), with ‘judge’ Vladimir Romanenko ordering that she remain in Yalta throughout the two year period.

Larisa Kitaiska was detained by the FSB on July 18, 2016, with a search carried out of her home in Yalta.  Although not held in custody, she was forced to sign an undertaking not to leave Yalta.  The businesswoman and former Maidan activist left Crimea after Russia’s invasion and, living with her family in Kyiv, never concealed her opposition to Russian occupation.

She and her husband returned to Yalta at the beginning of July to sort out some problems to do with their flat.  She later suggested to the Crimean Human Rights Group that the FSB’s persecution might be aimed at seizing control of the flat.

She said that the six security service officers who had arrived at their home had not shown any court order, but had claimed that she was not replying to their summonses, none of which she had received. She said that the investigator told her that he’d like her flat.

Kitaiska called the psychological pressure that they had put her under to get her to provide a ‘confession’ had been akin to torture, and complained of the effect it had had on her health.

They had accused her of ‘incitement to inter-ethnic enmity’ and cited an article she had allegedly posted on Facebook from a 1957 issue of the Soviet Pravda newspaper about Nikita Khrushchev’s times, when people from Ukraine developed Northern Crimea.

If there was a plan to appropriate Kitaiska’s flat, this must have been foiled by her refusal to confess to non-existent ‘incitement’.

On August 11, 2016, the de facto prosecutor “confirmed the legality of the criminal proceedings initiated against the Yalta woman who had circulated Russophobic ideas on the Internet”.  They had supposedly verified and confirmed that it was legitimate to bring charges against her for posting “material of an extremist nature”.

It was asserted that the information posted “was aimed at inciting hatred and enmity to a group united by nationality”.  She was accordingly charged under Article 282 § 1 of the Russian criminal code (publicly inciting enmity on ethnic grounds), with this carrying a sentence of up to five years’ imprisonment.

It remains unclear what specific posts were deemed by the Russian-controlled prosecutor and ‘judge’ Romanenko to be ‘Russophobic’, but, judging by the prosecution of Russian Tatar political prisoner Rafis Kashapov and others, criticism of Russia’s invasion and occupation would almost certainly have been enough.

As reported, the initial detention and search of Kitaiska’s home coincided with the publication by the Crimean Human Rights Group of advice to Ukrainians visiting Crimea.

This document specifically warned that the FSB closely follows social networks, and that even reposts can be dangerous.

The activists noted that Russia’s ‘anti-extremist’ and ‘counter-terrorist’ legislation was dangerously vague, applied selectively and for political reasons. For that reason, it was impossible to hope for any fair judicial assessment in Crimea at present.

They advised then to suspend all social network accounts since these are closely followed, with any criticism of the Russian authorities, any publications expressing a pro-Ukrainian position, photos from Maidan, or with Ukrainian soldiers, etc. potentially qualified by the Russian FSB as ‘extremist’ or ‘terrorist’.

In fact, it is clear from the imprisonment on surreal charges of Oleksandr Kostenko and Andriy Kolomiyets, that any Ukrainian who took part in Maidan is in danger of arrest and imprisonment.