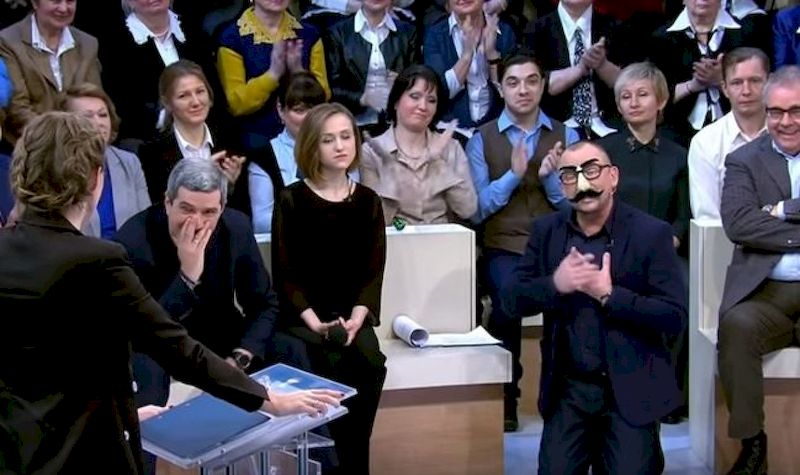 One of the talk show hosts wore a mask to ridicule Ksenia Sobchak. Screenshot from Pervy Kanal.

It is not only the Kremlin’s counterparts on the international stage that are targeted by the disinformation campaign. Opposition politicians, human rights defenders and other members of civil society inside Russia are no less frequent victims of discrediting media attacks.

A full hour of ridicule

Last week it was opposition member Ksenia Sobchak who was taken through the mill of ridicule, intimidation and misrepresentation, after she had accepted an invitation to appear on a talk show on Russian state TV and discuss her declared wish to run as candidate in March’s presidential elections in Russia.

During a full hour, Ms Sobchak was yelled at, interrupted and ridiculed with intimidations and sarcasm from the side of two male hosts, who enjoyed the full support of the studio audience’s many rounds of applause. The tactic used against Ms Sobchak was to frame her as someone from show business, i.e. as someone who cannot be taken seriously, although Sobchak is a respected journalist and herself a host at the independent channel TV Rain (Dozhd). The intimidation reached its climax when one of the talk show hosts put on a clown mask to undermine whatever was left of seriousness in the programme; tellingly, this moment came when Ms Sobchak presented her view of Crimea as illegally annexed by Russia.

“I never thought that you could lie so frankly, so shamelessly”

Sobchak reacted on Instagram to the experience, with an image of the talk show host wearing the clown mask together with the following comment, in which the disinformation that was used against her in the show is described:

“Today I was lucky – I went to hell. You will agree that not everyone is lucky enough to discover if there is a life after life. Now I know for sure – there is. And it is called “Vremya Pokazet” [“Time will show”, the name of the talk show] on [state TV] Pervy Kanal […] This was an important and valuable lesson. Now I know how in a short time the most educated people of Europe can be turned into fooled crowds. How smart, kind and open people have been turned into an angry army of primitives, dreaming of the death of their neighbour, friend, brother […] I never thought that you could lie so frankly, so shamelessly. It’s easy to broadcast live when you use recordings produced by your own editors and present them as if they were phone calls from viewers. When you can shout at the whole country with an insulted facial expression that Ukraine never had any nuclear weapons; that we never had a friendship and cooperation agreement with Ukraine; that the pensions in Russia are not 7,600, but 11,300 rubles. That’s okay. I was – more or less – prepared for that. But that my own words will not just be distorted and taken out of context, but that words that I never have said will be attributed to me!” 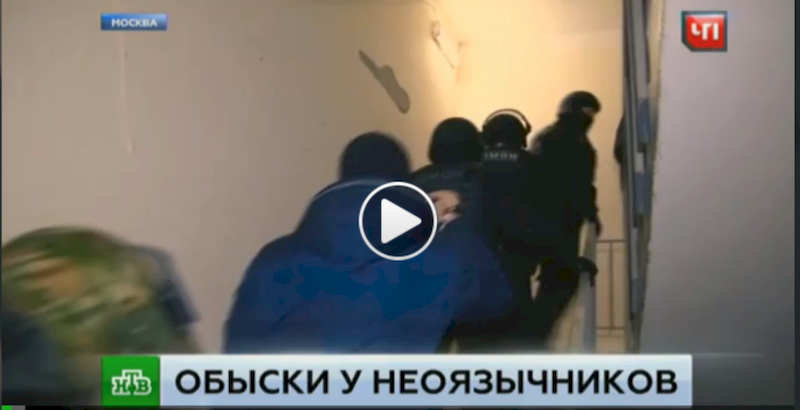 That talk shows on Russian state television cultivate intolerance and aggression towards dissenting voices is no news; we have described these functions in two previous publications, “The role of talk shows on pro-Kremlin TV” and “The trait of violence against foreigners on Russian TV“. We have also in our database documented multiple cases when disinformation has been disseminated by state TV Pervy Kanal, and in the “Vremya Pokazhet” show in particular. Similarly, we have earlier documented the special genre, in which Kremlin-loyal TV stations produce discrediting and incriminating attacks on opposition members and civil society representatives, dressed up as investigative documentaries.

The way Ksenia Sobchak was treated last week shows that in the eyes of the Kremlin, state television remains a legitimate weapon against Russia’s opposition.