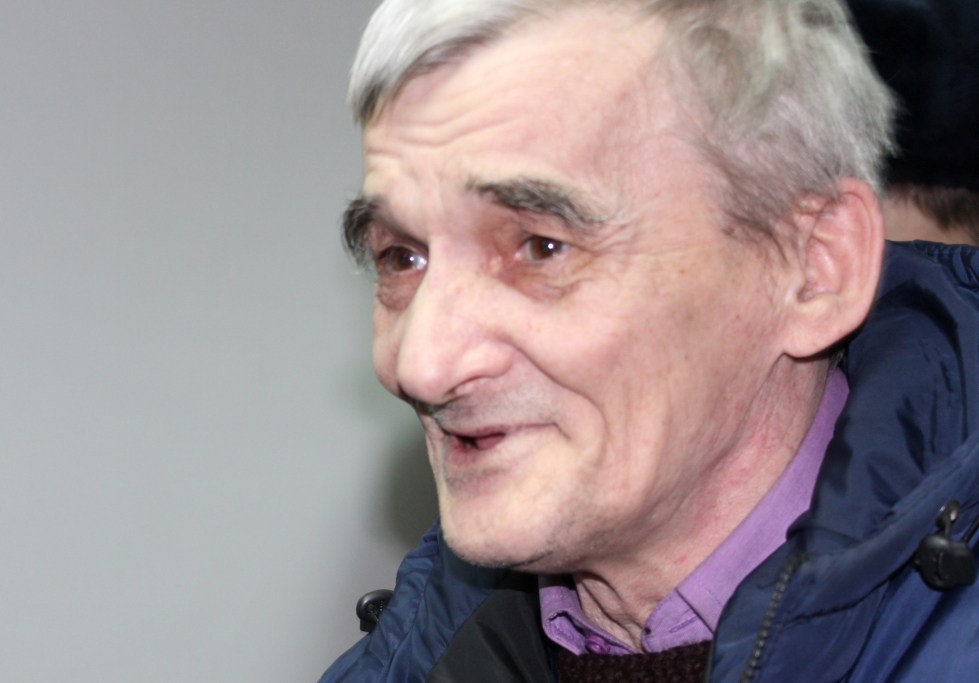 A second expert assessment has effectively overturned the entire case against Yury Dmitriev, renowned Russian historian and head of the Karelia branch of Memorial.  There is no immediate sign that this judicial travesty is ending, with the prosecutor immediately demanding yet another assessment of the photos which experts found no pornographic content in, and also that Dmitriev be placed for ‘tests’ in a psychiatric institution.  The court agreed to both, however did reject the prosecutor’s application for a further three months in detention.  Whether Dmitriev will be released on January 28, his 62nd birthday, remains to be seen, given the clear attempts underway to save the prosecution.

Prosecutor Yelena Askerova’s insistence on a new assessment was especially suspect  since it was she who had insisted on using the Federal Department of Independent Forensic Assessments.  This was after the first official assessment of the supposed pornographic content in photos by a mathematician, a teacher and an art historian was demolished by real specialists.  Dmitriev’s lawyer Viktor Anufriev was almost certainly right that the plan was to obtain an ‘expert assessment’ which reiterated the findings of the first, but that the publicity over this case made it harder to find people willing to put their signature to such a document.  He reports that an attempt was again made to commission a third assessment from a dodgy outfit during the court hearing on December 27, but that the court accepted the defence’s objections and the photos will be sent to the Serbsky Institute in Moscow.

The Federal Department of Independent Forensic Assessments’s assessment confirmed everything that Dmitriev himself has said from the outset.  The experts found nothing pornographic about the photos Dmitriev had taken of his foster-daughter.  They saw no sexual intent in the photographs, only the aim to monitor the child’s physical condition.

As reported, Dmitriev was arrested on December 13, 2016 and charged with ‘preparing pornography involving a minor’ (Article 242.2 of Russia’s criminal code) and ‘depraved actions with respect to a child under the age of 11’ (Article 135).  Both of these  charges pertained solely to a folder filed on his computer which contained 114 photos of his foster-daughter Natasha.  The little girl had been painfully thin and in poor health when he and his former wife took her from the children’s home when she was three, and the authorities had themselves advised him to monitor her development. Each of the photos, taken between 2008 and 2015 recorded her weight and height.   Dmitriev has said that they were essentially a medical journal, which he stopped keeping in 2015, when Natasha was 10 as there were no longer any concerns about her physical wellbeing. The photos showed her naked, which made it easy to see whether she seemed too thin, whether ribs were protruding, etc.  They also ensured that the authorities saw that she was well-looked after and that there were no suspicious bruises.

The folder was only on Dmitriev’s computer, making the charge of preparing pornography quite incomprehensible.  The court had accepted the purportedly expert assessment by three individuals with no expert knowledge in the subject.  It was telling that even they ‘found pornography’ in only nine of the 114 photos.

On June 22, 2017, Dr Lev Shcheglov, the President of the National Institute of Sexology, was questioned at the trial.  He was categorical that none of the photographs in the Dmitriev file were pornographic.  The same conclusion was reached by other experts called by the defence.  Two Moscow specialists – Grigory Shayanov and Fyodor Katasonov – also confirmed that it was common practice in Russia to take photographs for such medical purposes.

Even Prosecutor Askerova was forced to agree that another assessment was needed.  She insisted, however, that this be only of the nine photographs which a mathematician had seen ‘pornography’ in.   Given the reason for the photos provided by Dmitriev, any assessment needed to be of them all, however, the court then allowed the prosecutor’s demand and has done so again, with respect to the third formal assessment.

There has already been a psychiatric assessment which found no sexual aberrations.  The prosecutor’s demand for another, coinciding as it did with an assessment that found nothing sexual in the photos at all, was without any foundation, however it was allowed by the court.  The only positive thing is that this redundant examination will also be carried out by the Serbsky Institute.  The latter was notorious for punitive psychiatry in Soviet times, however it is difficult to imagine what they could come up with here, even if they use the possibility envisaged by Russian legislation to extend the length of the ’examination’ far beyond the customary month.

Yury Dmitriev is well-known far beyond Russia for his work in uncovering the mass graves of victims of the Terror at the Sandarmokh Clearing (Karelia), and also in identifying not only the victims, but also the perpetrators of the Terror.  Dmitriev’s daughter, Kateryna Klodt, is not alone in believing that the charges brought against her father are directly linked with his work, and because “the children of those who once executed or imprisoned people, now hold office”.

A very large number of prominent historians, political analysts, writers and others have spoken out in defence of Yury Dmitriev.  On July 25, the Memorial Human Rights Centre declared him a political prisoner and demanded his release and an end to this fatally flawed and political trial.