Putin ‘supports’ large-scale exchange of hostages held in DonbasRussian-controlled Donbas militants to release four hostages as election boost for Putin friend MedvedchukFreed Donetsk religious scholar: Many in Donbas want a return to Ukraine but are afraidNo end to waiting for the families of 2 Ukrainian soldiers captured in Putin’s Minsk II Debaltseve DeceitBitter World Cup for Prisoners of Putin’s Undeclared War against Ukraine in DonbasFake ‘Ukrainian fascist’ arrested and charged with working for Russia and its proxy Luhansk ‘republic’ Prisoner exchanged for Ukrainian hostages gets 17-year sentence in Russian proxy Luhansk ‘republic’Ukrainian hostages not forgotten but Russia understands only the language of ransoms and sanctionsEmpty promises from Ukraine’s leaders as release of Kremlin’s hostages ‘buried’Russia’s fake ‘Ukrainian fascist’ returns to Ukraine to fight against ‘fratricidal’ war in DonbasWhy expel Russians ‘planning crimes for the Kremlin’ when Russia holds so many Ukrainian political prisoners?Attempt on the life of ex-hostage tortured for her pro-Ukraine stand in Russian proxy Donetsk ‘republic’Ukrainian researcher tortured & sentenced to 13 years for ‘treason’ against a fake Russian proxy republicPOWs tortured for defending Ukraine in Donbas and for Russian propagandaWhy is Ukraine letting Donbas militant escape justice for Izolyatsia secret prison war crimes?Prisoner exchange leaves most Donbas hostages in captivity and makes journalists suspiciousDesperate plea to Zelensky from relatives of hostages once again forgottenLuhansk militants sentence Ukrainian to 12 years for “state treason”Moscow attempts to get trial of key Russian MH17 suspects moved to RussiaTwo suspected Maidan killers return to Ukraine, claiming they’re victims of persecution
• Topics / The right to liberty and security 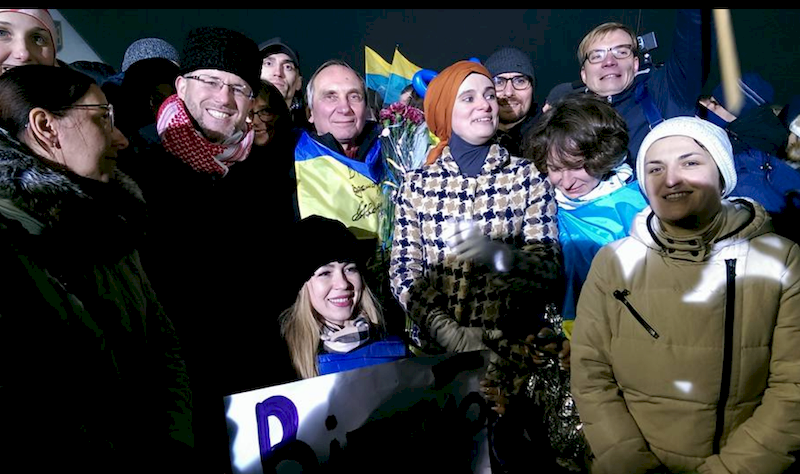 63-year-old Ihor Kozlovskyy and many other hostages whose insane ‘trials’ have been reported here are free at last, and returning to their families.  The joy and relief that this first exchange of prisoners in 15 months was really taking place was tinged with sadness for all those who remain imprisoned – at least 103 in the self-proclaimed ‘Donetsk and Luhansk people’s republics’ [DPR, LPR] and over 60 held in Russia and Russian-occupied Crimea.   This is supposed to be the first of several exchanges, but the families of Serhiy Glondar and Oleksandr Korinkov have heard such assurances many times over the last two years.

The release of 74 Ukrainians prisoners of war and civilian hostages had been agreed, however one woman chose to remain behind, saying that although she held pro-Ukrainian views, her family was in Donetsk.

Although the Minsk Accords clearly states that there should be an all for all release of prisoners, not one exchange has ever been of equal numbers, and that on Dec 27 was no exception.  The Ukrainian government had agreed to release 306 people, however 29 refused to go to the Russian-backed ‘republics’ when already at the exchange point, while a further 40 who had been released from custody or imprisonment in anticipation of the exchange simply failed to turn up.  237 prisoners were therefore handed over.

Some of the PoW, whose relatives have campaigned for over the last year and more have been released, but some, like Glondar and Korinkov, who were captured by Russian soldiers or pro-Russian fighters at Debalseve, remain imprisoned.  So too does Stanislav Aseyev, the journalist and blogger seized by the so-called ‘DPR ministry of state security’ in June 2017.

Those civilians released on Wednesday included many whose seizure and supposed ‘trials’ have been reported here.

63-year-old Ihor Kozlovskyy , a world-renowned Ukrainian academic and advocate for inter-faith dialogue, had been held prisoner in DPR since January 2016.  He had remained in Donetsk to care for his severely disabled son Slava.

Volodymyr Fomichov is a civic activist who was taken hostage in December 2016 when he tried to visit his family in Makiyivka for New Year.  He was reported to have been ‘tried’ by the militants and sentenced to two years’ imprisonment, with this almost certainly after being subjected to torture.

Yevhen Chudnetsov (or Chudentsov) – is a young volunteer fighter from Makiyivka, who was captured in early 2015, and tortured into ‘confessing’ for Russian television.  He was ‘sentenced’ 14 months later to 30 years by a so-called DPR military court for a supposed “an attempt to violently seize power on the republic’s territory”.

21-year-old Vlad [Vladyslav] Ovcharenko and 20-year-old Akhtem Akhmerov had been imprisoned in Luhansk since October 2016, ‘for’ a flash-mob with the Ukrainian flag and for burning the flag of the self-proclaimed ‘Luhansk people’s republic’.  This the Russian-backed LPR ‘ministry of state security’ termed ‘spying’, sentencing Ovcharenko on October 25 to 17 years’ imprisonment and Akhmerov to 13.

Edward Nedelyaev is a blogger from Luhansk who was seized by the ‘LPR ministry of state security’ in November 2016, and later sentenced to 14 years’ imprisonment.  This was alleged to have been for ‘state treason’, though was clearly for ‘negative comments’ about LPR.

Valentina Buchok was charged with ‘spying’ for the SBU, though the alleged tasks she fulfilled would have been of quite bizarre uselessness had there been any substance to the charges.

Valery Nedosekin, a college director at the Donetsk Academy of Motor Transport was recently sentenced to 12 years for supposed spying.  He had been accused of “gathering and passing to the Ukrainian Security Service information whose divulgence was aimed at causing harm to DNR security.”

It was mentioned that he had communicated with the SBU by twitter, and since military equipment was mentioned, it seems likely that the alleged harm was that he was showing photos of Russian tanks, armoured vehicles, weapons and fighters.