Russia imposes prison sentences for donating to ‘undesirable NGOs' and adds Bard College to its blacklist 2020: There was no worse year in the realm of human rights after the Revolution of DignityIs Ukraine’s penitentiary system ready to fight the coronavirus?Measures to prevent spreading of COVID-19 epidemic in penitentiary institutions of Ukraine (updated)Russia rages as plans for legitimizing its proxy Donbas “republics” are foiledBizarre court rulings point to mounting judicial rot in UkraineVital healthcare reforms at risk after court’s suspension of Acting Health Minister SuprunPoroshenko urged to give 6 million rural Ukrainians their freedom after 18 long yearsA brief description of KHPG strategic litigations in January–June 2018Statement of NGOs from different countries regarding the possible election of a Russian representative as a President of InterpolKHARKIV HUMAN RIGHTS PROTECTION GROUP. ANNUAL REPORT. 2017Social care homes in UkraineThe Only Way to Improve Ukraine’s CourtsPresidential Administration Says Law Requiring Activists to Disclose Assets Is Invalid and Unenforceable, but Ukraine’s Activists Aren’t Buying ItUkraine Should Remove "Stringent" Disclosure Law on Civil SocietyDon’t throw the baby out with the bathwater: the selection of Supreme Court judges in retrospectWhy Election Reform Should Be a Top Priority NowA brief description of KHPG strategic litigations in January–December 2017Anti-corruption groups question motives for prosecution of YouControl open access firmUkraine’s Challenges Are Very Real, but Now Is Not the Time for the West to Let Up
• Topics / Social and economic rights

Nine Things Ukraine Should Do in 2018 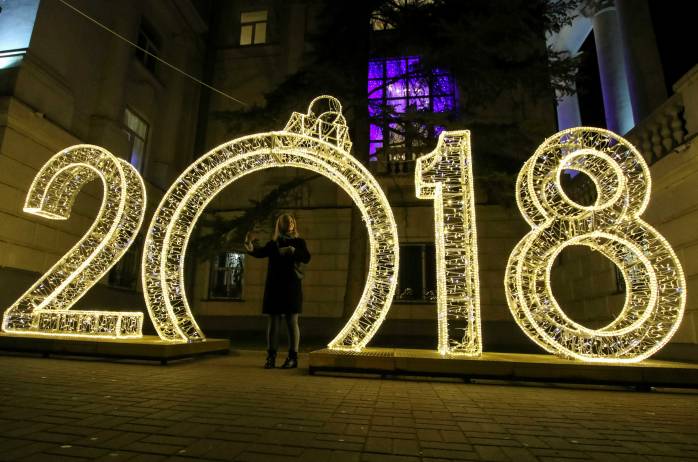 A woman stands next to a festive decoration for the New Year in Sevastopol, Crimea December 29, 2017. REUTERS/Pavel Rebrov

In September 2017, Parliamentary Speaker Andriy Parubiy branded the new political season “the autumn of reforms.” His prediction was partly right and partly wrong. Parliament did deliver on some overdue issues; however, the recent attacks on anticorruption institutions overshadowed a number of positive achievements. As Ukraine enters 2018, a year which precedes the presidential and parliamentary elections, it is important to examine the results of 2017 and identify the areas where the international community can help Ukraine’s reformers secure tangible progress. We have identified nine priority areas.

Ukraine fell short on anticorruption reform in 2017. The National Agency for the Prevention of Corruption (NAPC) sabotaged the verification of officials’ electronic asset declarations, parliament dismissed the chairman of its anticorruption committee for political reasons, and the National Anticorruption Bureau of Ukraine (NABU) faced numerous attacks.

Ukraine is still waiting on the establishment of the High Anticorruption Court. The president’s bill contradicts the Venice Commission’s recommendations and may hamper the court’s independence.

Setting up this institution in 2018—which remains a key condition of international assistance—should be the highest priority. But there are other concerns: there may be new attempts to limit NABU’s power in criminal proceedings, to appoint a politically loyal auditor to undermine it, or to simplify the procedure to dismiss the NABU director. It is also critical to stop harassment of anticorruption organizations, from the obnoxious electronic asset declaration that now applies to anticorruption activists to physical harassment, and freeze NAPC’s international funding until the agency is relaunched.

2. Reform the Judiciary for Real

In 2017, Ukraine established a new Supreme Court, but there are serious concerns about its integrity. According to the Public Integrity Council, which vetted the new judges, twenty-five of 114 judges have a dubious reputation. However, some progress has been made: the new Supreme Court is better than its predecessor and civil society actually participated in the selection process. Meanwhile, the largest failure of judicial reform in 2017 was the adoption of a new constitutional court law, which de facto eliminated the competitive selection of judges. To improve the catastrophically low level of trust in the judiciary, we must renew the trial and appellate courts in 2018.

The government has launched the creation of ministerial directorates responsible for the development of public policy, which aim to separate politics and policy. Troublingly, the heads of local state administrations received the right to combine their administrative functions with political activity, which leads to political dependence, and this should be repealed immediately. Parliament also changed the civil service law so that the president can directly appoint the heads and deputy heads of regional (oblast) and district state administrations without an open competition.

With the elections fast approaching, Ukraine has little time to change its ‘business-as-usual’ approach which enables fraud and vote buying. Civil society has been demanding the introduction of open party lists, greater responsibility for electoral crimes, and a reboot of the Central Election Commission.

Parliament recently adopted a new electoral code with open regional lists in the first reading. In early 2018, it is crucial to adopt this code to reduce the risk of corruption and enable voters to influence candidates’ placement in the party lists.

Throughout 2017, decentralization continued; 665 territorial communities across Ukraine have amalgamated and held elections, which enables them to enjoy broader administrative and budgetary autonomy.

In Ukraine, the oligarchs control the airwaves. But that may be changing, slowly. The public broadcaster, which carries the promise of independent media, was launched, although it is underfunded. Its budget should be significantly increased in order for the reform to succeed; the public broadcaster cannot develop high quality programs without full funding.

In 2017, parliament passed in the first reading a law that would simplify the procedures for state property sales and increase their transparency. This should be pushed through in 2018.

Parliament failed to create the Financial Investigation Service and put an end to unlawful activity of the tax militia, which was abolished in December 2016. This contributed to continued government pressure on business, which remains a serious obstacle to investment. These two institutional priorities should be addressed in 2018.

Parliament also prolonged a moratorium on the sale of agricultural land. It is crucial to devise sound legislation for an open land market in order to give the agricultural sector incentives for growth and enable landowners to exercise their Constitutional right to buy and sell their property.

In the Stockholm arbitration court, Ukraine beat Russia; the court ruled to cancel the so-called “take or pay” condition that applied to the 2009 Naftogaz-Gazprom contract. Parliament adopted progressive laws on energy efficiency, the electricity market, and commercial metering of heating and water. However, more progress is needed with the development of bylaws, and the rotation of members of the National Energy Regulator foreseen by the law is long overdue. Addressing these issues should be the priority in 2018.

9. Full Speed Ahead for Education, Pension, and Health Reforms

In the fall, parliament adopted progressive laws on healthcare, pension, and education. Healthcare reform introduces "the money follows the patient" principle and should increase the quality of care. It aims to create a medical services market while enabling patients to choose their doctors.

Pension reform will gradually increase pensions with a parallel increase of the minimum number of years a person must contribute, rather than a minimum retirement age. Importantly, a defined contribution system should start on January 1, 2019.

The new education law is also a step forward. It offers broader opportunities for teachers’ professional advancement and enables broader autonomy of secondary schools. In 2018, it is important to ensure the implementation of these reforms.

What Can the West Do?

The West still has strong leverage. From IMF funds to the new EU macro-financial assistance program that Ukraine hopes for, from monitoring of the visa-free regime to $350 million in US military assistance to Ukraine, all of these benefits are conditioned on further reforms. In 2017, both the IMF and the EU refused to give Ukraine pledged monies, after Kyiv failed to meet anticorruption and economic conditions it had agreed to, and this tough approach was spot on. As the 2019 elections approach and the populist agenda attempt to marginalize the reform program, it is crucial that civil society and the international community closely coordinate their efforts to ensure that this year’s policy agenda benefits society as a whole rather than the political elites alone.