Ukraine ordered to pay massive damages over police killing and cover upDeath of Ukraine’s most famous torture victim to be reinvestigatedTortured & Almost Certainly Innocent Ukrainian Life Prisoner Dies Without JusticeForced to hunger strike in search of justice for their sonsUkraine’s MPs block last chance of justice for tortured Ukrainian prisonersJudicial Review demanded for Life Prisoners Tortured into ‘Confessing’ to AnythingNo more than 3% of police torture cases in Ukraine reach the courtsMonitoring of unlawful violence in Ukrainian police (2004–2017)Russian FSB uses total isolation to torture and try to break abducted Kherson woman Brutal torment of young Mariupol woman imprisoned at Olenivka ‘concentration camp’ and in Russia Terror by family against Crimean Tatars in Russian-occupied Crimea ECHR slams Ukraine over detention which triggered anti-Roma riots in Odesa oblastRussians imprisoned 14-year-old boy and girls in Kherson and Mykolaiv oblasts ‘At the plant in Volchansk, the Russians tortured even the priest with an electric shock’Russians deliberately beat Ukrainian haemophiliac, threaten to rape his 17-year-old sister in front of her fatherSavage sentences against Crimean Tatar journalists for reporting on Russia’s ‘state terrorism’ in occupied Crimea Russian torture was particularly savage in Kherson oblast, with even teenagers imprisoned Russian FSB officer charged over unlawful detention and torture of Ukrainian journalist Vladyslav Yesypenko 63 bodies of Ukrainians tortured by Russians already found in liberated Kherson oblast ‘My mom wanted to take poison, but she learned from a letter that we were alive.’ The story of a doctor from Mariupol, part 2
• Topics / Against torture and ill-treatment
• Topics / Law enforcement agencies

Estimated 96 thousand Ukrainians were victims of police torture in 2017 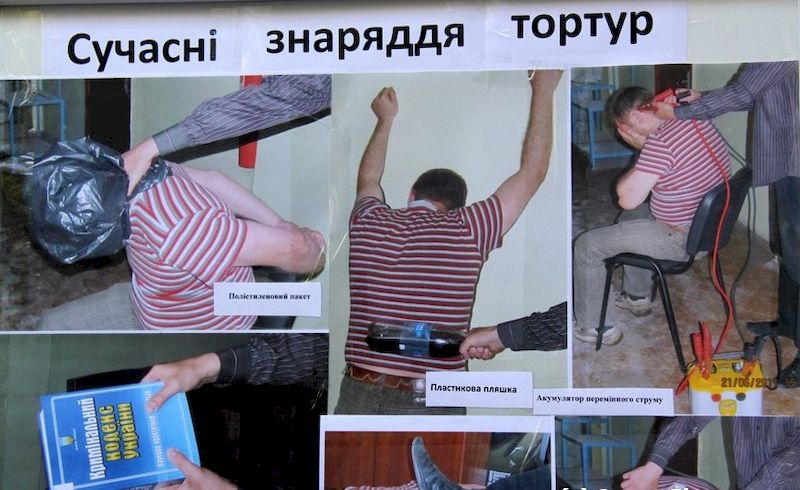 Any improvement immediately after Euromaidan in the perceived prevalence of police torture and ill-treatment in Ukraine has ended.  A survey * just published found that the number of victims of unlawful police violence had risen by well over 200 thousand since 2015, with the number of alleged victims of torture rising from almost 63 thousand in 2015 to almost 96 thousand in 2017.   The Kharkiv Institute for Social Research report that none of the promised reforms which could seriously improve the situation have been carried out.

The authors of the study report a “reverse trend after certain positive developments in 2014 when the number of victims of torture and ill-treatment by the police fell!.  They warn that “the system that existed up till 2014 is effectively beginning to return”,  adding that most of those suspected of crimes against Maidan have not been sentenced, and even those who did not get through the retesting system, have been reinstated in the police service.

1. The outdated system for evaluating police work has not been changed despite the declarations made by the Interior Ministry and National Police.

The Ukrainian system whereby police assessment, and remuneration, effectively depends on statistics about how many arrests have been made, how many crimes supposedly solved, has long been recognized as a major element encouraging the use of illegal methods, including torture as a means of extracting ‘confessions’.

2.  An equally inadequate system for receiving complaints about the police and investigating rights violations by the police remains unreformed.  Such complaints continue to be received, processed and ‘investigated’ by the law enforcement agencies themselves.  This deters a very considerable number of victims of torture from lodging formal complaints, though some instead turn to the media.  This all means that the real scale of unlawful police violence remains concealed and may bear little relation to the official statistics.

Other factors which directly contradict to the reduction in unlawful force are now being affected, in particular the availability of free legal aid.  The Coordination Centre for Legal Aid reported, for example, that 3,085 cases had been uncovered where police officers had acted in breach of the Criminal Procedure Code, with one in ten detentions having been carried out without a lawyer being informed.

The authors of the survey believe that the failure to consider important factors like the above has resulted in the ‘new patrol police’ increasing showing the patterns and use of unlawful violence typical of their predecessors.

The survey also uncovered another dangerous trend, namely the growing number of Ukrainians willing to tolerate police brutality.  Almost one in four Ukrainians believe that at least in some circumstances it is acceptable for the police to use unlawful force or even torture. The situations most likely to be viewed as making such force acceptable were where it as viewed as being “to solve particularly grave crimes”; “to prevent a terrorist act” and “to punish or revenge rapists, killers”.

The factors seen by respondents as contributing to the prevalence of torture and police violence were little different from in previous years.  Police impunity was named by 43.5%; the wrong people ending up in the police force (34.7%) and low professional and cultural level of police officers (30.5%).

The researchers have formulated recommendations to eliminate the above failings.

A new, independent and objective system is need for receiving and investigating reports and complaints of unlawful force used by the police.  All reports alleging police brutality should be treated as crimes, not as professional infringements. The Interior Ministry and National Police should begin implementing the relevant part of the Police Development Strategy concerning the involvement of civil society in investigating cases of police brutality.

There needs to be strict compliance with the norms of the law aimed at preventing unlawful violence.  These include ensuring that detainees are informed of their rights and allowed to inform a third party of their detention, as well as being able to speak with a lawful before their first interrogation.  They should also be able to see a doctor of their choice.

The flawed system for assessing police work must be changed.  The authors note that this is in compliance with the law on the National Police.

Work is also needed from both the state and civil society to reduce the tolerance shown by the public to the use by the police of torture and ill-treatment.

There are other recommendations regarding professional training of police officers, as well as measures to protect police employees’ rights and their conditions of work.