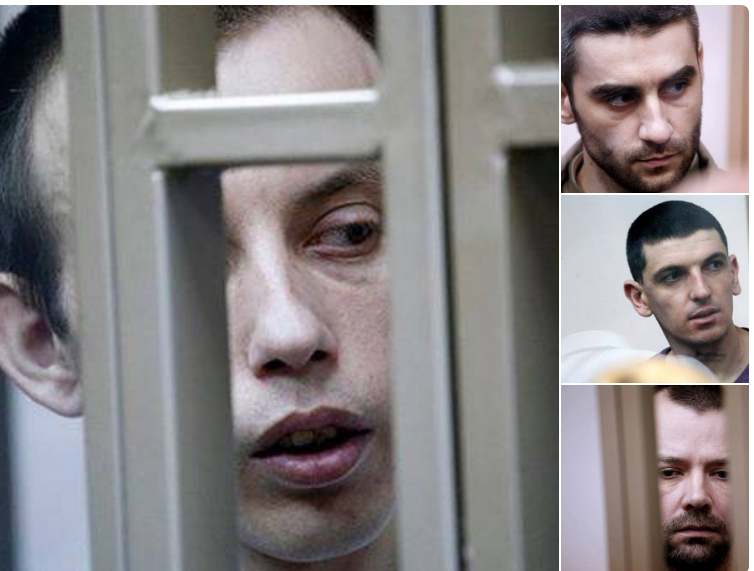 It is exactly three years since the first FSB arrests of Crimean Muslims on fabricated ‘terrorism’ charges and almost that long since 32-year-old Crimean Tatar political prisoner Ruslan Zeytullaev last saw his three small daughters - – Sabriye,  Mumine, and Nuriye. One of the girls became so hysterical at the sight of her father held in handcuffs that Ruslan told his wife not to put them through the trauma anymore.  With a new ‘trial’ of six Crimean Tatars beginning, and the number of political prisoners inexorably rising, it is worth recalling the cynical methods used to imprison the first four Crimean Tatars and how the FSB ensured the 15-year sentence against Zeytullaev that it  needed for paperwork and the promotions they get for arrest quotas achieved..

Russia’s calculation with such prosecutions seems to be that the word ‘terrorism’ and the strict secrecy it imposes will deflect attention from such cases, and for far too long after the first arrests on 23 January 2015 of Zeytullaev, Rustem Vaitov and Nuri (Yuri) Primov , as well as of Ferat Saifullaev shortly afterwards, that was the case.

The charges pertained solely to unproven involvement in Hizb ut-Tahrir, a  peaceful pan-Islamist organization which is legal in Ukraine (and other countries) and is not known to have committed an act of terrorism or violence anywhere in the world.  Russia’s decision in 2003 to declare it ‘terrorist’ was unexplained and taken in secret to avoid it being challenged. Russia now regularly sentences men to huge sentences merely on charges of being ‘members’, with the ‘proof’ of such membership most often fabricated.

All those convicted on such charges are recognized by the Memorial Human Rights Centre as political prisoners.  In the case of the first four Crimean Muslims, Memorial HRC saw no need to wait until the end of the ‘trial’, since even if the charges had been reasonable, which they were not, Russia would still be in violation of the Fourth Geneva Convention and other treaties by applying Russian law on occupied territory. Within a month of its illegal annexation of Crimea, Moscow brought in Viktor Palagin, notorious for his use of such ‘Hizb ut-Tahrir’ prosecutions in Bashkiria, to head the FSB.  His tactics in Russia have run up against problems in Crimea however, with the arrests, the fabricated charges and ‘trials’ given wide publicity and with lawyers insisting on highlighting all irregularities and falsifications.

Emil Kurbedinov, who defended Zeytullaev, explains that the ‘case’ against the four men was based solely on a tape of a meeting arranged by an FSB provocateur, who was later a ‘secret witness’ at the ‘trial’.  The individual asked deliberately provocative questions with this ‘kitchen conversation’ which he had secretly taped then used to convict the men.  It should be stressed that the questions were not about planned crimes, but about religious and political views.  The level of such ‘proof’ can be seen in the fact that the FSB’s ‘linguistic expert’ claimed that the men were members of Hizb ut-Tahrir on the basis of a word used, although this word, originally from Arabic, is common among Crimean Tatars.

Zeytullaev has since been sent to Maximum Security Prison Colony No. 2 in Salavat, Bashkiria, which has a very bad reputation and which is two and a half thousand kilometres from his wife and children.

Meryem Zeytullaeva is planning to see her husband in February, but has had to disappoint her daughters who can’t possibly make the long and arduous journey.  They are presently making cards, etc. to send their father in the hope of telling him how much they love him, and how badly they miss him.

Ruslan has asked for letters which are a vital lifeline for him and for the other political prisoners. It is doubtless dangerous for other Crimean Tatars in occupied Crimea, who are under constant surveillance to write such letters, which makes it all the more important that he – and Moscow – see that he is not forgotten.

Letters need to be in Russian, and on ‘safe’ subjects.  If that is a problem, use the crib letter below, perhaps adding a picture or photo.  It is good to enclose thin paper and an envelope, giving your address clearly in case he is able to reply.  It is important to give Ruslan’s name in full, and his year of birth.

The other prisoners also need our support!

Yury Primov  (best to use this Russified version of his name)

A video about the ‘trial’ and Ruslan Zeytullaev’s wife Meryem and their three daughters can be watched here  https://ru.krymr.com/a/video/28909652.html