Ukraine’s police must not collaborate with Azov xenophobesPolice officer accused of involvement in racist attack on football fansRacist attack on young man in KyivNo charges and racial motive denied in bloody attack on students in KharkivKharkiv attack on foreign students was no ‘mass brawl’Neo-Nazi Azov fighter granted Ukrainian citizenship linked with police and far-right vigilantesUkraine’s far-right National Militia threat to use force makes them dangerous election observersUN disbands Russian-blocked ‘fact-finding mission’ into mass killing of Ukrainian POWs at Olenivka prisonBrutal torment of young Mariupol woman imprisoned at Olenivka ‘concentration camp’ and in Russia She was about to turn 53. A citizen of Trostianets speaks about his wife’s detention and murderRussians deliberately beat Ukrainian haemophiliac, threaten to rape his 17-year-old sister in front of her father‘There was a human being, and the body was torn apart in an instant’ — a Mariupol graduate who went through hell20-year-old Crimean Tatar ‘arrested’ on grotesque charges three months after Russian occupiers abducted himFirst evidence of Russian abductions, torture and forced deportation from Kozacha Lopan (Kharkiv oblast)Vovchansk Engineering Works: Dungeons on the Chechen Model‘They shot at our feet, near us, and one guy was wounded with an electric shocker...’ Admission of guilt: Russia blocks international investigation of Olenivka mass killing of Ukrainian POWs ‘In a panic, people abandoned their bed-ridden relatives.’ А resident of Mariupol story about how people were coerced to leave for RussiaUkrainian POWs threatened with execution if they won’t blame Ukraine for Russia’s bombing of MariupolRussian show trial of Mariupol Azovstal defenders will likely be held on Ukraine’s Independence Day
• Topics / Interethnic relations
• Topics / Law enforcement agencies 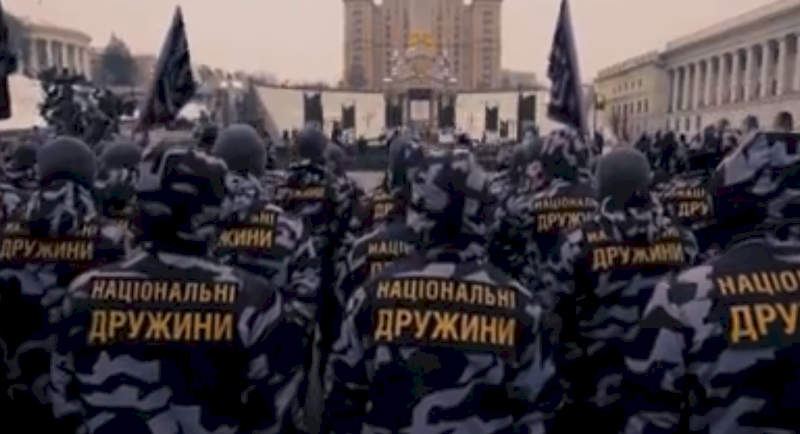 600 young members of the far-right National Corps party swore ‘an oath of loyalty to Ukrainians’ on January 28 in the centre of Kyiv.  The so-called ‘National Militia Units’ [національні дружини] plan to demonstrate their loyalty by “establishing Ukrainian order” on the streets of Kyiv, seemingly in cooperation with Ukraine’s National Police.  The explanation provided by an Interior Ministry spokesperson cannot allay concerns about police collaboration with an organization which has on many occasions demonstrated intolerance towards ethnic minorities, as well as to people whose sexual orientation, political or other beliefs they view with antagonism.

The ‘National Militia’ will be part of a ‘civic formation’ envisaged by Ukraine’s Law ‘On the participation of citizens in protection of public order and the state border’   Their declared aim is to patrol the streets and counter drug and alcohol dens.

Roman Chernyshov, from National Corps, told Hromadske Radio, that these formations have been active for a year already, but that this is the first such swearing-in of members.   He called the formation a “part of the Azov movement” which will help “where the authorities either can’t or do not want to help the Ukrainian community”.   He added that they do not bear arms and are not a police or military formation, “however they cooperate with the police”.

The event on January 28, as well as the video produced on social media, cannot be said to inspire confidence, especially not the statement under the video, reading: “There are many of us.  We are not afraid to use Force to establish Ukrainian Order on the streets!”.

Challenged to explain whether these formations are legal, Ivan Varchenko from the Interior Ministry explained that legislation does allow for civic organizations to assist law enforcement bodies in protecting public order, but stressed that the members of such organizations must work “together with officers of the National Police or National Guard”.  While asserting that the appearance of such organizations was “absolutely lawful”, he did stipulate that they must agree with the law enforcement bodies how and where they will work.

What Varchenko and the Interior Ministry assiduously avoid mentioning are the compelling grounds for concern about any cooperation between far-right vigilante groups and law enforcement bodies.  Such grounds include the views at the basis of the National Corps and previous activities of groups linked with the Azov Civic Corps.

This is a political party founded on 14 October 2016, through the merging of a recently formed civic movement called ‘Honest Matters’ [«Чесні справи»] and the much older ‘Patriot of Ukraine’. The latter Kharkiv-based paramilitary organization was founded in 2006 by Andriy Biletsky and other members of the neo-Nazi Social-National Party who were disgruntled with the more moderate VO Svoboda Party.  ‘Patriot of Ukraine’ espoused xenophobic and neo-Nazi ideas, and was engaged in violent attacks against migrants, foreign students in Kharkiv and those opposing its views.  Biletsky and some other members were suspected of violent seizures of newspaper kiosks and similar criminal activities.  Biletsky himself was in detention and one of the more controversial figures to have been released after Maidan.

There were, in short, grounds for concern over Biletsky’s role as commander of the controversial Azov Volunteer Battalion in the first months of the military conflict in Donbas, and his subsequent election to parliament as a non-affiliated MP in October 2016.

Doubts were even more pronounced over the appointment of the former deputy commander of the Azov Battalion Vadim Troyan as head of the Kyiv Regional Police Force (and later position as First Deputy Head of the National Police from March 2016) .  Although attempts were made to minimize Troyan’s involvement, he had also been a member of the racist and xenophobic ‘Patriot of Ukraine’.

The far-right, even neo-Nazi views of at very least some of the members of the Azov Battalion aroused controversy from the outset, and the concerns were largely the same with regard to the related Azov Civic Corps.  It is they who joined the National Corps in 2016, and are now planning to patrol the streets.

Members of the Azov Civic Corps are already known to have worked in cooperation with the police in the Kyiv oblast.  In February 2016, the Diversity Initiative and many civic activists demanded reaction from the Head of the National Police (then Khatia Dekanoidze) to apparent collaboration on ethnic profiling.  The video posted on Jan 25 (here also) claimed to be “a raid to uncover illegal individuals” in Bila Tskerkva [Kyiv oblast],  It called this a joint project between the Kyiv Oblast National Police and the Azov Civic Corps to identify foreign nationals infringing legislation on being in Ukraine.  There were fairly good grounds for assuming that the men were targeted for a ‘check’ solely because of the colour of their skin.

This was only one of several developments in early 2016 which make doubts about the involvement of the Azov Civic Corps in any such ‘patrol groups’ seem warranted.

While National Corps say that the men will not carry arms, the impression given by the ceremony on January 28 was very firmly of a paramilitary organization, and the latter’s own video boasts of willingness to “use Force”.  The men were all wearing the same gear, and the organization clearly has plenty of money available, which it claims is coming from ‘businesspeople’.

The concerns about these ’national militia’ are only exacerbated by the behaviour of the Kyiv police during an attempt to hold a gathering in remembrance of slain lawyer Stas Markelov and journalist Anastasia Baburova on January 19.  Members of the neo-Nazi C14 group turned up, reportedly flanked by some Russian and Belarusian neo-Nazis, and began so openly threatening those who had come for the remembrance gathering that the latter abandoned their attempt.

The police had not just failed to protect one group of citizens exercising their right to peaceful assembly.  Before the gathering was even scheduled to begin, the police detained eight activists.  They later tried to claim that there had been no detention, and that the activists had been ‘invited’ to the police station.

What followed was even more sinister. The detained activists reported later that they had been ‘hunted down’ by the far-right thugs after leaving the police station.  A member of the Human Rights Information Centre who spoke with them believes that the thugs could have only discovered which station the activists were being held in from the police themselves.

The administration of at least one district in Kyiv is known to have signed a memorandum of cooperation with the police and a civic organization («Муніципальна варта») which is headed by a member of C14.

This is not a question of merely disliking certain groups’ views, though it would be interesting to see whether the police would so willingly cooperate with, say, anarchist or left-wing groups wishing to exercise their right to create a civic formation to protect public order.

If the experience of ‘Patriot of Ukraine’ is anything to go by, members of organizations that gain the right to ‘patrol’ an area could become involved in criminal activities, for which Ukraine’s law enforcement bodies must not become a cover.