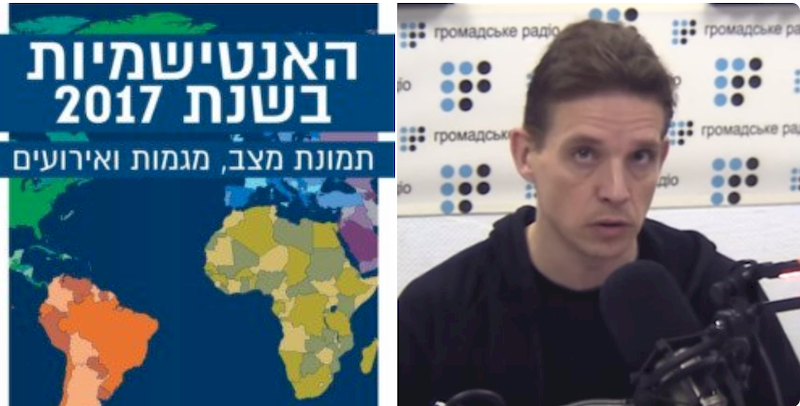 A report on anti-Semitism by the Israeli Ministry for Diaspora Affairs has come up with some statistics about anti-Semitism in Ukraine which would be alarming if they had any basis in fact.  According to Vyacheslav Likhachev, who has been systematically monitoring anti-Semitism and xenophobia in Ukraine for well over 10 years,  they have little or none. The report’s ‘findings’ have also been dismissed by Josef Zisels, the head of the VAAD Association of Jewish Organizations and Communities of Ukraine.

The ministry report on manifestations of anti-Semitism around the world was published on 21 January 2018, a few days before International Holocaust Remembrance Day.  In presenting it, Naftali Bennet, Minister for Diaspora Affairs, asserted that the number of anti-Semitic incidents had doubled in 2017.

While researchers can sometimes have difficulty determining which sources of information to trust, that should not have been an issue in Ukraine.  Likhachev, who now heads the National Minorities Rights Monitoring Group, is internationally known for his reports on anti-Semitism.  These do not simply chronicle manifestations of anti-Semitism, but also examine trends, making it possible to draw reliable conclusions about any changes.  The methodology is based, for example, on that proposed by OSCE in order that their statistics can easily be compared with those of other countries. The  Monitoring Group’s reports, as well as interviews with their authors, receive wide coverage and copies in Russian and English are available on the site of the Euro-Asian Jewish Congress.

Instead of using such sources, the authors of the Israeli report appear to have simply looked on the Internet, and then hazarded a guess as to how this compared with previous years.  There quite simply are no alarming statistics.  There was no doubling in the number of anti-Semitic incidents.  Yes, there was an increase, but from 19 in 2016 to 24 in 2017.  On the other hand,  from one act of anti-Semitic violence in 2016, there was none at all in 2017.

It is also claimed that over the last two years public insults of Jewish people in political life and in the state sector have become widespread.  Likhachev says he cannot recall even one such case in the state sector.  You get some in the political realm, but that’s the same in any country.

He assumes that the authors of the report simply dumped all ‘incidents’ that they heard about together, without differentiating between a real act of anti-Semitic vandalism or violence and insults shouted during a march.  This he calls shockingly unprofessional and “a breach of all standards for documenting hate crimes used by professional monitoring groups in Ukraine and abroad.

Likhachev is  also critical of the authors’ reliance on stereotyped positions.  He notes standard rhetoric about certain points in the past (about the very brief first period of Ukrainian independence from January 1918, and during the Second World War), without any attempt to take the real political and historical context into account.

While Likhachev does not feel it appropriate to begin comparing one country’s track record to another, he does suggest that the lack of any acts of anti-Semitic violence in 2017 and relatively low level of vandalism hardly warrant Ukraine having being singled out.

Had the authors of the ministry report followed the systematic monitoring available, they would have been aware that the Minority Rights Group monitors have, on the whole, found a positive dynamic in Ukraine.  The worst years for anti-Semitism in Ukraine were in 2007 and 2008, and the situation has largely been improving since then.

Moscow’s attempt to paint the post-Maidan government in Ukraine as, in Russian President Vladimir Putin’s words, "a rampage of reactionary, nationalist and anti-Semitic forces” has been backed by a massive propaganda machine, but came up against something even more formidable in 2014.

Prominent Jewish figures very publicly rejected such claims and in November 2014, several Jewish organizations passed a resolution in which they "called on the international community to be extremely careful in any evaluation of the situation regarding anti-Semitism in Ukraine coming from outside our country."

Likhachev, VAAD and, sometimes, local Jewish communities have also alerted the public, both in Ukraine and beyond, to overt fakes and provocation.  In October 2014, the Odesa Jewish community was forced to issue a formal statement denying lurid, frightening and entirely untrue Russian media claims that Ukraine’s extreme Right Sector party had "declared war on Jews in Odesa."  The police recently initiated an investigation into the sudden appearance of foul anti-Semitic graffiti in Odesa.  It remains to be seen what they come up with, but the Internet publication Dumskaya was clearly a little sceptical and noted that one of the messages, supposedly written in Ukrainian by Ukrainian nationalists had spelt Holocaust as though in Russian.

The ministry’s report apparently also attacks Ukraine’s Institute of National Remembrance and its head Volodymyr Vyatrovych.  The latter is, certainly, systematically seeking to entrench a view of history, and of the legacy of Stepan Bandera and the Ukrainian Insurgent Army [UPA] which many find contentious.  As Likhachev mentions, it would have been useful for the Israeli authors to have borne the current situation in Ukraine in mind. For a country effectively under attack, those seen to be defending its independence are likely to be viewed positively.  There is no evidence that Ukrainians who do see Bandera, Roman Shukhevych and UPA fighters in a positive light would justify anti-Semitic or anti-Polish sentiments.  Whether they are justified in denying, as many do, involvement by some UPA supporters in the Holocaust is a matter of debate, but not grounds for accusing Ukrainians now of anti-Semitism.

Likhachev cites public opinion surveys which show an improvement in the view by other Ukrainians of Jews since Maidan.  Contributing factors, he assumes, are the active role Jewish public figures and Maidan activists played in the Revolution of Dignity, as it became known, and also the clear pro-Ukrainian position taken by people like Ihor Kolomoisky.

In a report covering 2014 and 2015, the National Minorities Monitoring Group suggested other reasons also for the lack of any evidence of a rise in anti-Semitism and xenophobia.  They wrote then that Ukraine’s far-right has no need to look for mythical enemies when there’s a real enemy to be fought and their country truly needs to be defended.